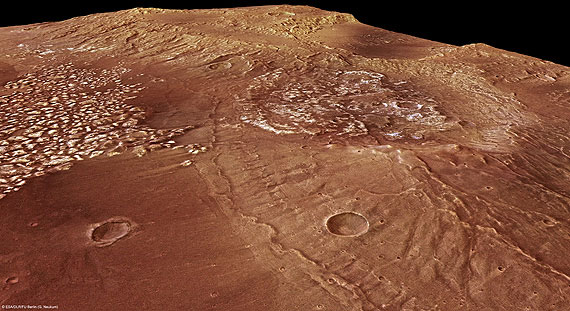 On Mars exists a patchwork of rectangular ridges, a mysterious feature unique to the red planet. While better and better photographs narrow down the plausible theories, we still don’t know exactly what created these puzzling structures.

The rainbow-coloured digital terrain model for Inca City on Mars is made from a stero-pair of photographs snapped by the Mars HiRISE orbiter. Image credit: NASA/JPL/University of Arizona/USGS

The first time we saw these geometrical features was with Mariner 9 in 1972. The intersecting, rectilinear ridges almost immediately spawned conspiracy theories about Martian cities, and immediately earned the nickname Inca City. Scientists postulated about dunes formed by annual winds from minimally two distinct directions, either modern or ancient dunes that were buried, hardened, and exposed. Or perhaps the ridges were formed from injections of magma forming dykes, or soft sediment pushed into subsurface cracks, hardened, then exposed by wind erosion.

In 2002, the Mars Global Surveyor (MGS) Mars Orbiter Camera (MOC) took a wide-angle photograph during the spring melt. The larger context shot revealed that the Inca City ridges are part of a larger circular feature 86 kilometers across.

Circles are always exciting in planetary science, and are frequently indicators of impact craters. If this is an ancient, buried crater that has been partially exposed, the ridges could be fractures in the bedrock from the initial impact, or filled-in cracks from the shattered crater floor. Or maybe this isn’t a crater, and the ridges were formed by some other process entirely.

Every year, the entire region is covered in a few meters of carbon dioxide ice. During the spring defrost, dark patches are exposed in the rectangular pits. A pair of photographs were taken by the Mars Reconnaissance Orbiter during the ice-free months to build a high-resolution digital terrain model (DTM) of the location. The DTM is scaled to a meter per pixel, with variation in vertical relief mapped to tens of centimeters.

Now we have a beautiful, detailed map of exactly what these features look like, maybe one day soon we’ll have a single, solid theory for how they formed.

Image credits: NASA/JPL/University of Arizona. For another HiRISE image, here’s an eroding crater on Mars. Need more that’s-not-an-alien mystery? How about cavities in the sun’s corona?

In this article:honeycomb structures, Mars