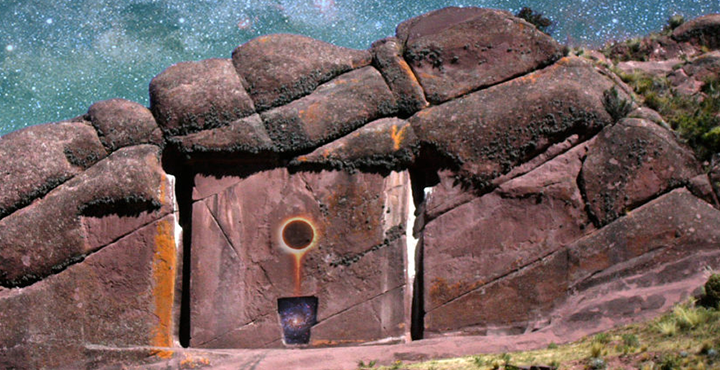 Since time immemorial the area of ​​Hayu Marca has been very revered by local populations, coming to consider it as “the City of the Gods”.

An ancient prophecy tells that a mysterious door, located near Lake Titicaca, in Peru, will open someday and allow the entrance of the gods, who would return in their solar ships after a long time. Despite being an ancient prophecy, this structure very similar to a door exists, and is located exactly in the mountainous region of Hayu Marca, 35 km from the city of Puno-Peru.

Due to the wildness of the area very few explorations have been made, and without finding any city that gives validity to the denomination of “City of the Gods”. But despite the few findings, the rock formations of the region resemble buildings, dinosaurs and artificial structures.

This “Door” was discovered causally by the local tour guide José Luis Delgado Mamani, who found it while making an excursion through the surrounding hills of the area.

The curious thing about the discovery is that, according to Delgado Mamani, he had been dreaming of this structure for a long time, and he saw what appeared to be a door covered with pink marble and with various statues of the same marble on each side of the path . He also says that in his continuous dreams he could see that a smaller door inside the large door was open and that a bright blue light was emitted outwards creating a kind of gleaming tunnel.

Delgado Mamani’s supposed visions have a lot to do with reality, since the structure has a smaller kind of door inside and worked on the same rock. Also these visions are closely related to the legends of the native Indians of the area who narrate that this “door” was an “entrance to the lands of the Gods”, and in those legends it was said that in ancient times great heroes had crossed the door to join the Gods and have a new glorious life and immortality.

Another Legend tells that during the time of the Spanish conquest, an Inca priest of the temple of the seven rays called Aramu Muru fled from his temple with a sacred golden disk known as “the key of the gods of the seven rays”, and He hid in the mountains of Hayu Marca to avoid having his gold disc taken away. Later the priest came to the door, where he showed the key to several shaman priests in the area, who after performing a ritual managed to open the door, emanating from it a blue light, then the priest Aramu Muru handed over the golden disk to one of the shamans and proceeded to pass through the door, and he was never seen again.

After some studies of this structure, archaeologists have observed a small circular depression on the right side of the entrance, where they believe it is possible to place a small disk.
Current testimonies Some of the people who visit the place and have placed their hands on the small door have commented that they feel a great energy flow through their bodies, they have also managed to have strange visions like stars, columns of fire and sounds of a music which they describe as “rhythmic, unusual and extraordinary”.

This construction resembles the Puerta del Sol of Tiwanaku (Tiahuanaco) and five other archaeological sites, and this is where another strange event occurs, if we join with imaginary and straight lines the points of “the Door of the Gods”, the door of Tiwanaku and the other five archaeological sites mentioned above, originates a cross form, where its lines intersect exactly at the point where the plateau and Lake Titicaca meet. In addition, the UFO activity in the area is very high in all these points and especially in the vicinity of Lake Titicaca, where it is even said that there could be a hidden alien base. Just in this lake have been observed as blue spheres emerge or submerge from the waters.

Recently, remains of an ancient submerged city were found several meters away on Lake Titicaca, which is presumed to be many years old, even older than all the other cultures known today in Peru.

Interestingly, there is a connection between the door of the gods in Hayu Marca and a document declassified by the FBI a while ago, called “The Vault”, stating that beings of other dimensions visited the Earth.

Being Peru a territory of frequent UFO and Paranormal activity, the possibility that these constructions in the area of ​​Hayu Marca are related to the UFO phenomenon would not be so absurd; we must add to this the continuous sightings of strange objects in the region.

The theories of ancient gods and astronauts exist in almost all of the world’s ancient cultures; By investigating this topic a bit, you can find many of these relationships with possible alien beings or “beings coming from the stars”, as they tell many stories and legends of our ancestors.

The question is: will they come back one day?

Advertisement. Scroll to continue reading.
In this article:City of the Gods, Hayu Marca