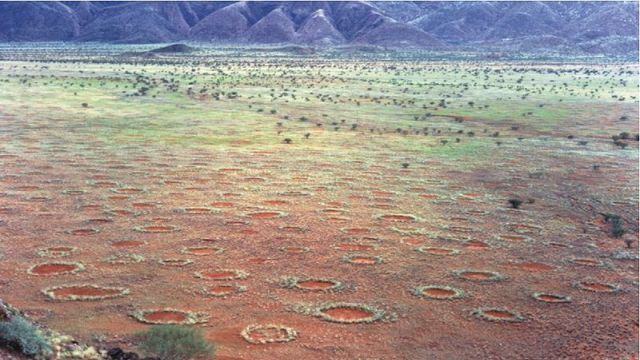 In the grasslands of Namibia are millions of strangely bare circles. They’re called “fairy circles.” Although we know, roughly, what happens during their lifespan, no one knows why they crop up, or why they eventually fade.

The term “fairy ring” means different things in different parts of the world. For some reason, they all center on botany. In some parts, they refer to a ring of mushrooms that pop out of the ground seemingly at random. In my neck of the woods, they refer to a circle of trees, most often redwoods, that surround the stump of a fallen tree. In Namibia, they refer to the strange bare patches that pepper some stretches of grassland.

The patches can be anywhere from six feet to thirty feet wide. They show the reddish brown dirt against the pale green of the grass, and are often surrounded by deeper grass or little hills. They have been the subject of speculation for some time. They have also been the subject of multi-year satellite studies. It seems they start small, when one patch of ground goes bare. Around the patch spreads, though the grass immediately around it grows deep and lush. After a time, new grass frosts over the red dirt and the ring disappears.

At least some of this can be explained. The grass just on the edge of the dirt doesn’t have to compete as strenuously for water as the rest of the grass does, and so it grows taller and deeper. And hills don’t build up around the patches. Instead, the wind blows away the topsoil of the bare patch, and so the patch itself sinks down. This is explicable. Why the circles get started, why some grow larger than others, and why their lifespans differ, no one knows.

Via NY Times and the AAAS.

In this article:fairy circles, Namibia