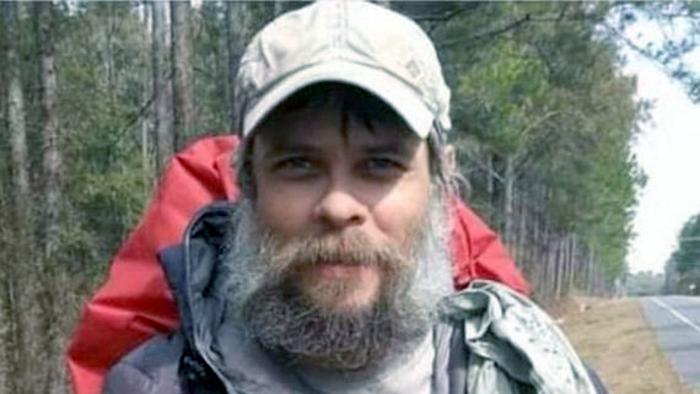 No one ever found out who this man was, what his name was and where he lived and worked. He did not hide his face and allowed many to take pictures of himself, but so far no one has identified him. And his death turned out to be frighteningly strange.

The term “hiking” in the United States refers to long walks in the fresh air, mainly in the lap of nature. And “hikers” are those who are fond of it. Hiking does not require special equipment and preparation, because the walking routes are laid along well-known paths, where there are no difficult obstacles and which pass near settlements.

Many outdoor enthusiasts, including the elderly and the disabled, practice hiking in the United States. They usually take with them a backpack, some supplies of food and water, as well as a tent if they plan to spend the night away from the settlements.

In April 2017, the man walked outside New York City and walked 2,200 miles on the Appalachian Trail, a well-known hiking trail. Then he walked the Florida Trail through Key West. It had been a long and arduous journey, but he did it easily.

Along the way, the man encountered many people, but did not tell anyone his name and seemed a little strange. He quickly became famous among other hikers and earned the nicknames “Denim” and “Mostly Harmless” from them, because his favorite book was “The Hitchhiker’s Guide to the Galaxy”.

Everyone he met on the trails later described him as a friendly, likeable and cheerful person who had a friendly and smiling face, but at the same time tried to stay away from other hikers. He was often asked to come on a visit to wash, dine or do laundry, but he most often turned down these offers, preferring to spend the night in his tent or in tourist hostels.

What happened to him later turned into a real detective riddle, which no one has yet solved. On July 23, 2018, two hikers, Nikolaus Horton and Logan Bull, were passing through a site called Camp Noble at Big Cypress National Reserve in Collier County, Florida. Suddenly, not far from the trail, they noticed what seemed to them an abandoned tent of bright yellow color, and out of curiosity they came closer.

Inside the tent, they found something that shook them to the core, there was the dead body of another hiker, which looked unusual even for a corpse:

“His body was twisted, and his eyes were wide open and looked straight at me.” – said Horton.

Outwardly, it was a man between the ages of 30 and 50 with a beard, but as thin and haggard as a prisoner of a concentration camp. Near the tent were his boots, walking sticks, and in the tent there was a backpack with things, a wallet with $ 3,640 in cash, and two notebooks covered with travel notes and some sort of computer-like codes.

The hikers called the police and soon an investigation was launched into the death of the unknown traveler. His body weighed only 83 pounds (37 kg) and all over it appeared that he died of severe exhaustion.

This immediately seemed very strange to everyone, because not far from this place was a road where there were eateries and cafes, and the dead man had a lot of money. Then the investigation was faced with the problem of identifying the corpse, it turned out that his prints were not in the police database, and a sample of his DNA sent for research at the University of North Texas did not show any similarity to any of the samples from the national databases.

Detectives looked through hundreds of cases of missing people in the United States to try to find a photo of a similar person, but this also did not lead to any result. Only later, when the portrait of the deceased began to be shown to other hikers, one of them recognized the deceased as a man nicknamed “Mostly harmless.”

One of the first to recognize him was a woman named Kelly Fairbanks, who said that she met him on the routes and talked, and he told her that he left New York and was walking the trails to Key West. For some time they walked along the path and Kelly spoke of him as a kind and very nice person with good eyes.

“I was surprised that he didn’t have a phone with him, it’s strange for hikers not to take the phone, and then we wished each other a good journey and said goodbye. So sorry for him, but he died doing what he loved.”

Then many more were found with whom “Harmless” met on the trails between New York and Key West, and they all told about the same. Many even photographed him as a keepsake. No one, however, knew his name, or who he worked for, whether he had family or friends.

It was discovered that he once registered at the hostel under the name Ben Bilemi, but this name was not listed in any of the US databases, so it was assumed that it was a pseudonym. Hikers could not name a single trait of “Harmless” by which it was possible to identify his identity. He did not have an unusual accent, and among his things, only unusual codes in his notebook indicated that he could be associated with computer scientists. One of the hikers claimed that Harmless once told him that he was working in the high-tech industry, but that was the only statement of this kind.

The police were taken aback. Who was this guy? Where did he come from and where did he live? If he worked in the field of IT technology, then why did no company identify him when his photos were repeatedly shown on TV? Was he engaged in some kind of secret activity, with which his strange death could be connected? In the meantime, a medical examination of Harmless’s corpse presented new puzzles.

Experts have never been able to find the cause of his death. He did not have any dangerous diseases, moreover, he was in general surprisingly in excellent health. The only clue was extreme exhaustion.

And this exhaustion was also very unusual, because it turned out that some other hikers met “Harmless” just before they found him dead, while he did not look exhausted at all. The photographs of “Harmless” taken as a souvenir by these hikers proved the veracity of their words.

All this made the case even more strange and incomprehensible, but on this the investigation finally stood up. Even the active dissemination of his photographs on social networks did not help in the hope that Internet users would recognize him.

This man did not hide his face, he had a cheerful and kind disposition, he seemed not afraid of anything and just enjoyed his rest on the trail. And then he suddenly died of extreme exhaustion in his tent, not far from the cafe and with a lot of money in his wallet. What happened to Harmless?