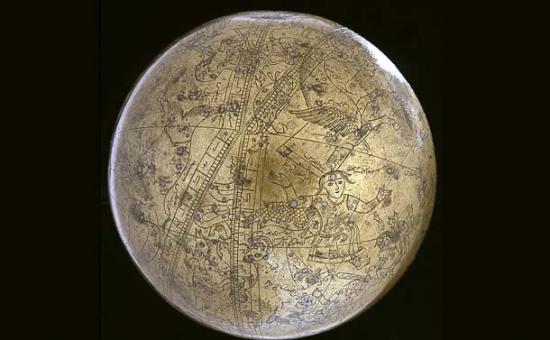 Before the advent of Google Earth, when one wanted to see what the planet looked like, or to find a certain faraway place without actually travelling to it, one would consult a map – and you’ll recall that they didn’t always fit in your phone. We’ve made maps for millennia. It’s an art form unto itself, and as anyone with a love for antique maps can tell you, the variation in form and artistic style is both immense and awe inspiring.

Of course, there are different kinds of maps. From a technical perspective, there are topological and topographical maps, navigational maps, population maps, faction maps, marine maps, even wind maps. Most are concerned with demonstrating relative locations on Earth, but people have been making maps of the stars for almost as long as they’ve been giving each other badly drawn directions to the corner store. Celestial maps, as they’re called, offer a standardised view of constellations and individual stars, along with their relative position compared to specific points on Earth.

One of the problems with celestial maps, and actually with all maps, is the two-dimensional representation of a three-dimensional object or space. In order to accurately plot locations and show a realistic measure of their position relative to all others, the cartographer must distort the actual shape of either the Earth or the heavens. This, obviously, can cause some problems when one wants to clearly understand the actual relationship between two locations. The answer? Globes!

Globes too, are split into two categories, terrestrial and celestial. The earliest known terrestrial globes date to ancient Greece (6th to 3rd century BCE), though no examples have survived the ravages of time. Celestial globes may have gotten a start much later, possibly as late as 2nd century CE, as a part of the Farnese Atlas, which is a Roman replica of the classical Hellenistic sculpture of Atlas, but depicting him holding up the heavens, rather than the world. Though, since no examples or records of celestial spheres have been found (yet) prior to this point, it’s not known when or who exactly started the trend. Antique celestial globes are most often made out of metal, usually bronze, and are usually hollow, but are also found in marble and other sculpting mediums.

In the realm of celestial globes, also known as celestial spheres, there are some spectacular surviving examples, and among those gems are hidden one of history’s most vexing puzzles.

In the 1980s, a Smithsonian historian of science, Emilie Savage-Smith, embarked on a journey throughout the middle-east, with the purpose of finding and studying celestial spheres from antiquity. She found a bounty of them, some of the most incredible works of cartographic art and engineering ever made by human hands.

Among those she found there were two distinct types; seamed and seamless spheres. Seamed spheres are, or were, made by moulding two halves of the sphere separately and then soldering them together, ultimately buffing the soldered seam to make a smooth sphere. Then artisans and astronomers would engrave the surface according to whatever specific element of the skies they wanted to depict.

Seamless spheres, however, were another thing entirely; something Emilie Savage-Smith discovered quite unexpectedly.

Up until Savage-Smith made her discovery, it was thought by virtually the entirety of the academic community and by metallurgists the world over, that all examples of hollow metal celestial spheres in existence were of the seamed type. This was owing to the long held belief that creating seamless hollow metal spheres is impossible. It turns out, that isn’t true.

One of the earliest examples of a seamless celestial sphere found by Savage-Smith, was found to be from a workshop in Lahore, Pakistan, though she soon found that the technique, described as ‘secret wax casting’ was widely known by metal craftsmen in Northern India from at least as early as the late 16th century and coming from the Mughal Empire. In fact, some of the workshops identified continued to use the technique up until the 19th century. Though it has apparently now been lost to modern manufacturing techniques.

According to some, the best surviving example of a hollow, seamless celestial sphere is one made by a Mughal metallurgical master and astronomer named Muhammad Salih Tahtawi in 1631. The sphere, known as the celestial globe of Muhammad Salih Tahtawi, is a massive bronze globe adorned with ornate engraving in both Arabic and Persian, as well as numerous pictographic representations of celestial bodies. Its manufacture would have been an immense undertaking, though Salih Tahtawi surely succeeded in creating a masterpiece unparalleled before or since. The existence of the spheres, which are commonly known as Islamicate Celestial Globes, isn’t without controversy though. Aside from the obvious resistance among modern metallurgists to the idea that these objects were created as Savage-Smith asserts, there exists a good deal of misinformation about these spheres, stemming from what appears to be a reluctance to attribute such mastery to the Muslim ruled Mughal Empire. Several people have asserted that the existence of both Arabic and Persian language on many of the surviving examples is explained simply by the suggestion that those features were added long after the spheres were made. Presumably implying that the spheres themselves were made by a much older culture, perhaps even in a different area of the world.

Bronze casting techniques similar to that which may have been used to create these spheres, such as lost-wax casting, originated approximately 5700 years ago in Israel, but there is no evidence thus far to substantiate such a claim.

Circumstantially, it is a well-established fact that Arab and Muslim cultures were responsible for a great many technological and scientific advances throughout the middle-ages and long before. There seems to be no valid reason to deny that this particular innovation also came from their masters.

Unfortunately, the subject of seamless celestial spheres is little known in mainstream culture, and as such, in the few places it is discussed, the facts are often distorted or even completely made up. There are those who would like to claim that these magnificent examples of our history are actually OOP-ART (out-of-place-artefacts), suggesting that their origin is related to either a lost pre-historic human culture or aliens. Though as with most such arguments, there isn’t enough information at present to really dive into the discussion.

In any event, once again we are awed by the sophisticated and masterful creations of our forefathers, and once again, our steady march toward modernity has cost us the wisdom of the ages.