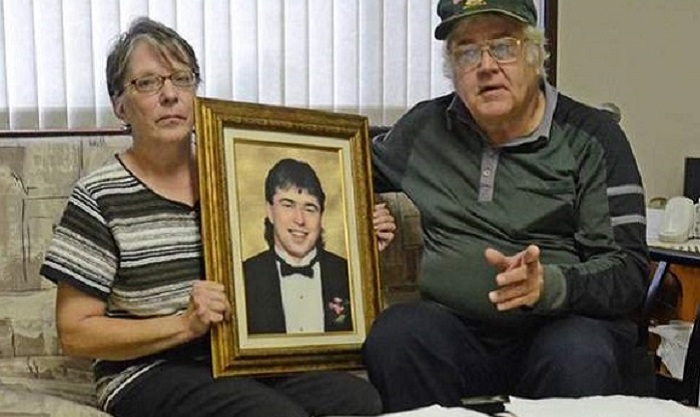 On August 22, 2011, a woman named Gladys Sherby goes to visit her son Corey Sherby in the city of Chiliwick, British Columbia, Canada.

It was just a visit and similarly, Gladys visited her son many times. But no one opened the door that day when she called. She started knocking, but the result was the same. Then Gladys remembered that she had a copy of her son’s house keys and decided to go in alone.

What she saw left her terrified and shocked. Later, she launches a dark and mysterious conspiracy theory on the Internet that has yet to be answered.

Corey’s cold body was next to the living room sofa, kneeling. His head was lying face down on a sofa pillow. Everything around the man’s body was covered with a very dark, almost black liquid that turns out to be Corey’s blood.

When Gladys Sherby recovered from the initial horror, she found the strength to turn her son’s body face up. It frightened her even more… The man’s face was completely white and his ears were entirely cut off.

At the house, she saw many bloody prints. She found the strength to flee the house and call the police.

When the police arrived and began to inspect the crime scene, the first thing they found was that there were no burglaries. They did not see any blood prints or footprints anywhere, although Gladys claimed she saw them clearly in all rooms and talked about them on the phone when she called the police. These were the first strange circumstances.

In the corridor of the house, police found an empty pizza box, the phrase “Better Be a Funeral“. What this means and whether these words are related to Corey’s death remains unclear.

The pathologist who examined the young man’s body found that there were no signs of external violent injury or any indication that Corey had defended himself before his death. He died about 48 hours before his mother discovered his body. At the same time, the pathologist did not find out where so much blood could have flowed from and eventually decided that it was from some kind of natural opening in the body.

Finally, the cause of death was stated “a fatal combination of cocaine and ethanol“.

It is curious that in his Report the pathologist does not mention the missing ears of the deceased, which Corey’s mother has repeatedly mentioned and still insists on. There is also nothing mentioned in the Investigator’s report about them. Is this a mistake or a deliberate concealment …?

When Gladys Sherby called the police, she also managed to call her loved ones and they arrived as quickly as possible, shortly before police. Relatives claimed they had seen blood prints everywhere in and around the home.

“I was struck by the bloody steps on the stairs and the huge puddle of blood on the floor, but the worst part was finding a piece of my nephew’s head lying on the floor in the middle of the living room.”

The police report and the pathologist did not mention anything about bloody spots and the piece of skull on the floor.

None of the family members believed in the cocaine and ethanol version. Corey did not drink or use drugs.

After hearing the official version, the father of the deceased commented angrily:

“Drugs and alcohol? Corey was such a person that he didn’t even take aspirin! “

When investigators began questioning relatives about when Corey was last seen alive, it turned out to be on August 19, three days before his death. According to Corey’s father, that day, he visited his son to bring him burgers for lunch and saw an unknown woman in the house with Corey.

The woman was dressed in a leather jacket and lightweight sneakers, but Corey’s father did not have time to look at her in more detail, as Corey did not answer his question about who the lady was, and instead hurried to say goodbye to him.

The father told the cops about this strange woman, but they seemed to completely ignore his testimony. None of the investigators sought the woman and was not mentioned anywhere in the official reports.

Realizing that something completely incomprehensible is happening, Corey’s family begins sending letters to the courts and the police. They are asking to review the investigation into the young man’s death and to take into account all the evidence. But, they only received a few different non-engaging answers.

Authorities say Corey died of drugs and alcohol. The case is closed and will not be renewed.

Then other strange things started happening. In December 2011, Tami Burden, Corey Sherby’s childhood friend, suddenly went to the home of the deceased’s parents and seemed very excited and scared.

She started stuttering, saying that Corey had not died of drugs but had been killed and that the same people wanted to kill her.

How the parents reacted to these words is unknown, but three months after that – on February 3, 2012, Tammy Burden was found dead in her house. The official cause of death is “death from blood poisoning after being accidentally cut with a knife“.

It was all the more frightening when, in 2014, someone sent an anonymous letter to the Corey Sherby family:

“Dear Sir and Mrs Sherby, Shakespeare has said, ‘Fury in hell is nothing compared to an abandoned woman.’ Those who know what it is will keep silent. I think your son Corey decided to retire too late and that endangered his well-being and his life! Sincerely, reader of The CHWK Times. “

What is the meaning of this strange letter? What does its author say?

The quote mentioned in the letter does not belong to Shakespeare, but to William Congrave. Is it possible that the letter was sent simply by some fan of black humor? Or is there any hint …?

After many years, during which Corey Sherby’s family continues to send letters to various authorities, at the end of 2019, the case has finally been reopened. It has been announced that the Sherby family has the right to go to court and request that they show all the documents of their son’s death.

The results will be announced no earlier than April 2020.