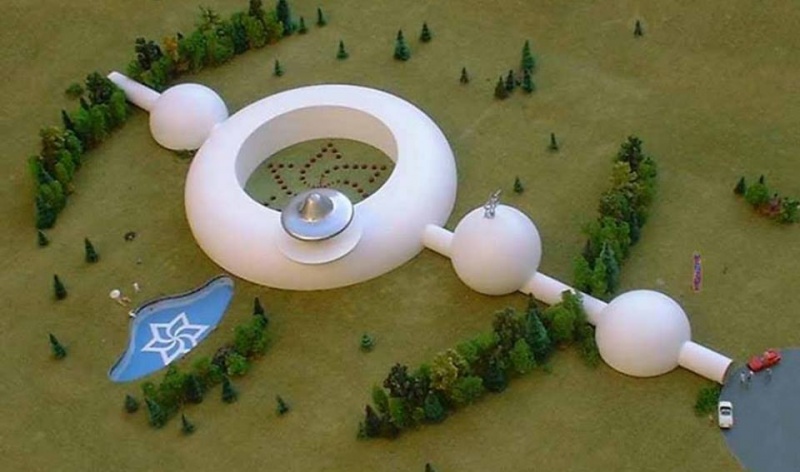 There are hundreds of sects in the modern world, in which more than 60 million people are members. Among them there are both dangerous and even outright criminal ones, as well as those based on goodness and universal love. And there are a lot of strange cults, the existence of which is generally hard to believe. One of them is the Raelians.

It can be said that these people worship extraterrestrial intelligence, but this is too superficial for a definition. This belief is much deeper and more interesting than it might seem at first glance.

Meeting on the mountain

Like any other cult, the Raelians have their own founding father. This is the Frenchman Claude Vorilhon, who calls himself Rael. This man was a professional car driver and journalist, but on December 13, 1973, an incident happened to him that changed his life. Vorilon was fond of hiking in his free time and often visited the mountains.

That day, he climbed a dormant volcano near the city of Clermont-Ferrand, in central France. In his book The Last Message, Claude wrote that he saw an unusual flying object. At first he mistook it for a helicopter with tourists, but then he realized that it was a flying saucer. The UFO emitted a cone of bright light, in which the alien appeared.

Vorilhon had a conversation with the guest from outer space, during which he learned an important thing. The alien reported that he came from a distant planet, very similar to Earth. His goal was to observe humans, since “people on Earth are the future, and we are the past.” The stranger told Claude to come to this place the next day and take the Bible with him.

After that, Vorilhon kept meeting with the alien on the mountain for many days in a row, and he explained to him the true meaning of biblical stories. It turned out that the holy book is of stories about how aliens visited Earth in the past and contacted people. Vorilhon claims that the true picture of the creation of the world, created by an alien civilization was revealed to him during these encounters with the alien entity.

The Flood turned out to be the result of a nuclear war, and Noah’s Ark was a spaceship. Nuclear strikes caused huge tsunamis in the World Ocean, sparing nothing living. But in the space ark, they managed to hide one cell from each terrestrial organism. This made it possible to restore life on an almost dead planet.

Looking ahead, let’s say that it was this part of the alien’s story that elevated cloning among the Raelians to the great sacrament category. Other chapters retold by the alien guest were even more unexpected. For example, Sodom and Gomorrah were destroyed because in these cities there were scientific centers leading people along an erroneous path of development. Other lectures were no less informative, and as a result, Vorilhon learned the main thing – why he was tortured with theological conversations for so many days.

It turns out that aliens created people so that they would one day receive secret knowledge about the universe. But first, the creators need to make sure that humanity is ready to receive this information.

With this secret knowledge, Claude Vorilhon left the mountain and turned into Rael. Having learned the truth, he began to actively preach and the number of his disciples began to grow like a snowball.

How do the Raelians believe?

We have already said that the Raelians are a strange sect. And their main strangeness is that they do not believe in any gods, they are atheists. Raelians and aliens are not worshipped, as they are considered to be the same people, but with more advanced technologies.

They believe that people were created by an extraterrestrial civilization, which was created by another, and that, in turn by another endless creation loop in time.

The universe, according to the adherents of this faith, is infinite, and all these endless creatures are the circle of life. All these births of new intelligent beings take place thanks to cloning technology. The aliens know the secrets of DNA and are able to design different forms of life at their discretion. At the same time, as imperfect creatures, aliens make mistakes. Because of this, people have organs that are not very efficient, and these shortcomings are the cause of diseases.

All the founders of existing religions, that is, Christ, Buddha, Mohammed and others, are just prophets sent by the creators. Raelians call these creators in a generalized way – Elohim. They give us truths through the prophets, but we almost always misunderstand them. If everything went as expected, then humans would live far from the way they are now.

Raelians are very fond of everything natural, therefore they have a positive attitude towards nudity. They also have no sexual restrictions. As you may have guessed, this is not the last reason why this sect is actively attracting new adherents. Many cunning people are ready to listen for hours to stories about the birth of another life in an alien test tube, for the sake of the opportunity to hang out in the company of liberated sectarians.

Raelians periodically make loud statements. In 2002, representatives of the Clonaid company announced to the world that they had succeeded in cloning a person. The director of the company is Brigitte Boisselier, since 1992 she has been a member of the Raelian sect. Therefore, it immediately became clear what all this was for. As expected, the firm did not provide any evidence of its success. But the statement did its job – interest in the sect began to grow.

After that, the Raelians spoke more than once about successes in cloning and even published several books on this topic. But since their statements were unfounded, they were no longer taken seriously. Primitive PR and outright lies have hit the reputation of the sect hard.

Now the Raelian movement and Rael himself categorically deny any connection with the Clonaid company.