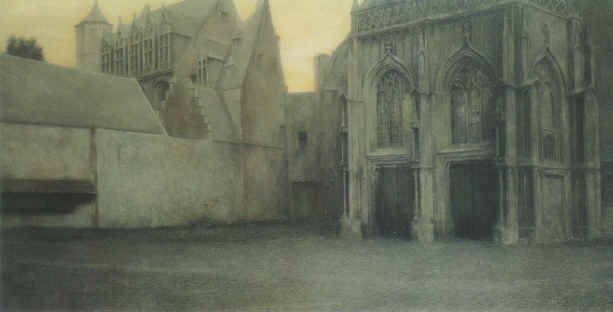 In his 1959 book “Mysteries Solved and Unsolved,” Harold T. Wilkins gives an account of a nightmarish discovery that is simply enigmatic.  It is so enigmatic, in fact, that I have my doubts about whether his story is more fact than fiction—particularly since I have been unable to find any corroborating evidence for his macabre anecdote.

Wilkins wrote that “some years” before WWII, he was in Bruges, Belgium, boarding at an ancient house in the heart of that still largely-medieval city.  During his visit, he was told of a very strange skeleton found years before in the building.

The house had originally been a Dominican monastery, but by 1908 it had become a boarding place for artists and tourists.  However, no tenant remained for long.  They reported the phenomenon common to haunted houses—mysterious footsteps, spectral raps on doors, etc.  An English visitor even reported encountering something “damned inhuman” in one of the passageways.  Finally, the owner of this increasingly unpopular residence had workmen excavate the cellar, as that was seen as the source of all the strange activity.

It was behind one of the walls that they found the skeleton.  The skeleton of what, no one could say, not even the pathologist brought in to examine it.  It was not an animal, and all the spectators shuddered at the idea that it could have ever been anything spawned by humans…

The ghastly remains, Wilkins tells us, were packed off to an unnamed medical museum, and the house became as quiet as the house of God it once was.

So, there you have it.  Make of his story what you will.  As I say, I think it’s quite possible that Wilkins heard some small, innocuous fact or outlandish legend from which he crafted an uncanny tall tale—and his lack of specifics about time and place tend to back that up.  On the other hand, if there is anything I have learned in this life, it’s that pretty much anything is possible.  To borrow from that old witticism about ghosts:  I do not believe in the Monster of Bruges, but I am afraid of it.