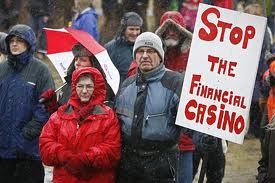 The man who forced the government of Iceland to resign and removed the IMF representatives from his country, , is now teaching meta-modern democracy throughout Europe. The rest of the world would benefit from following the example set by Iceland: Arresting the corrupt bankers who are responsible for the current economic turmoil.

Iceland’s president explained how his country recovered so quickly from the recession: “The government bailed out the people and imprisoned the banksters — the opposite of what America and the rest of Europe did.”

The true measure of the leader is not how many followers he has, but how many leaders he creates. The general public hasn’t been educated to see beyond the social stereotypes to understand that those in highest levels of power today do not have humanities best interests at heart.

Control Your Money or Your Money Will Control You Change your attitude toward debt. Every time you use credit for a purchase think, “Debt is slavery; I am making myself a slave.”

“Manipulators rarely advise you to seek new and diverse information or to ‘learn and research for yourself,’ it tends to be safer for exploitative and irresponsible leaders to keep their citizens in the dark; in their view less independent thought is better. Independent thought leads to an inquiring mind, a mindset that eventually leads to the questioning of authority figures, and that is the one thing that inadequate leaders do not want.”

Governments have never existed to solve problems domestic or international. Governments and their institutions exist merely to further and secure the interests of favoured groups, but We the People are never the favoured group.