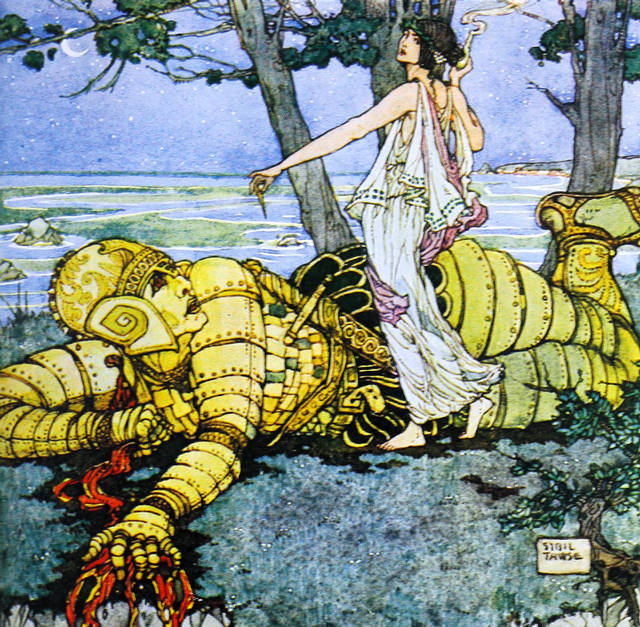 Were there robots with artificial intelligence in ancient times? Are myths and legends about mysterious android machines just a product of human imagination? In this article we will briefly review the ancestral mythology from a technological point of view and in light of the ancient astronaut’s hypothesis.

Historians usually trace the idea of ​​automatons to the Middle Ages, when the first automatic movement devices were invented, but the concept of real and artificial creatures dates back to the myths and legends of thousands of years ago.

Artificial intelligence, robots and objects that move by themselves appear in the work of the ancient Greek poets Hesiod and Homer, who lived between 750 and 650 years before Christ.

For example, the story of Talos, first mentioned around 700 BC by Hesiod, offers what could be described as the conception of a robot.

The myth describes Talos as a giant bronze man built by Hephaestus, the Greek god of invention and blacksmithing. Talos was commissioned by Zeus, the king of the Greek gods, to protect the island of Crete from invaders. He marched around the island three times a day and threw stones at the approaching enemy ships.

At its core, the giant had a tube that ran from his head to one of his feet that carried a mysterious source of life of the gods that the Greeks called icor . Another ancient text, Argonautica , dating from the third century BC, describes how the sorceress Medea defeated Talos by removing a bolt on her ankle and letting the ichor fluid out.

Pandora’s myth, first described in Hesiod’s Theogony , is another example of an “artificial being.” Although many later versions of the story portray Pandora as an innocent woman who, unknowingly, opened a box of evil, Hesiod’s original describes Pandora as an artificial evil woman built by Hephaestus and sent to Earth by order of Zeus to “Punish humans” for discovering fire.

In addition to creating Talos and Pandora, the mythical Hephaestus made other objects that moved by themselves, including a set of automatic servants, who looked like women but were made of gold. According to Homer’s account of the myth, Hephaestus gave these artificial women “the knowledge of the gods” (artificial intelligence ?!).

It is said that Chi You had a human body, four eyes and six legs. As if it were an antenna, a bump was coming out of his head. According to the book Shuyiji (述 異 記), his eighty-eight brothers had the same animal form, but with a bronze and iron head. Everyone “fed” with rocks and sand.

Chi You was executed by the mythical yellow emperor Huangdi, after an epic battle involving a dragon, magical powers and “storm rays” as weapons. His head was buried by his followers in a cave, where he was worshipped by locals. His grave radiated a red cloud from time to time.

Emperor Huangdi, on the other hand, legends grant properties such as being immortal, the god of Kunlun Mountain and the center of the Earth. He had a winged dragon named Huang Ti, whose body shone like metal. But despite having wings, this dragon could only fly with the right weather conditions. Legend has it, for example, that one day the emperor climbed “aboard” the creature, but it failed to take off due to a hurricane – a very strange circumstance considering that dragons were considered protectors of rain and rain. wind-.

The “anomaly” described in the previous paragraph can be understood under the technological vision, which would look at the “dragon” as some kind of prototype flying machine. According to ancient accounts, this “dragon” could carry up to seventy passengers in their “moustaches.”

This is probably the most remote and distant mention of Robots In Ancient Times. And if we go back to the farthest past, Sumeria and the Gilgamesh Epic inevitably arise .

Gilgamesh was a semi-divine king of Uruk. He was considered “two-thirds divine and a human tecius,” something that did not assure him of immortality, so, in the face of uncertainty, he decided to seek it for himself.

Luckily, Enkidu, a former rival turned friend, knew how to get to the secret abode of the gods. Enkidu told Gilgamesh that he had wandered for a while on the mountain of cedars and knew the underground entrance that led to the residence of the god Shamash. But he warned him of the danger of getting there.

A sinister monster guarded the entrance of the gods. His name was Huwawa, “the guardian of Shamash’s entrance.”

This is how Enkidu described the monster or Robots In Ancient Times: “Huwawa is an extraordinarily constructed machine. Its roar is like a flood, its mouth is fire, its breath is death … You can hear a cow moving at sixty leagues and its net can capture from a great distance … Weakness takes hold of those who approach the forest doors » .

Enkidu describes what we could now consider as a kind of robot, with radar systems and equipped with weapons that throw fire, radioactive gases, and paralyzing magnetic fields.

Far from being scared, Gilgamesh would ask his friend to accompany him to fight together and stand before the secret abode of the gods, and thus claim the legitimate immortality he believed belonged to him for having divine blood.

After traveling a long distance to the west and entering the forest, Enkidu managed to find the door, but when he tried to open it an invisible force shook him a violent discharge that made him fly through the air, something that physically paralyzed him for twelve days .

When he finally recovered, he tried to convince Gilgamesh to return, but it was in vain. The monarch was determined to find immortality, so he went ahead and found an entrance tunnel. When they began to remove trees and stones to access inside, the monster Huwawa appeared.

«His appearance was powerful. His teeth were like those of a dragon, his face like that of a lion, but the most fearsome was his radiant ray, emanating from his forehead, devouring trees and bushes, from his murderous force no one could escape.

Huwawa drew a path of destruction with his killer beam, so it could be a sort of long-range laser beam.

However, and already fearing the worst of the finals, the heroes received help from above. The god Shamash, aboard his flying ship, “lifted a wind” that reached the eyes of the monster and paralyzed him. Moment that Gilgamesh took the opportunity to bring Huwawa to the ground. “Cedars resounded for two leagues, so heavy was the fall of the monster.”

Gods and Robots: Myths, Machines, and Ancient Dreams of Technology (2019), by Adrienne Mayor.

ChinaKnowledge.de – An Encyclopaedia on Chinese History, Literature and Art .

The Anunnaki: Creators of Humanity (2012), by David Parcerisa.

In this article:ancient robots, Talos