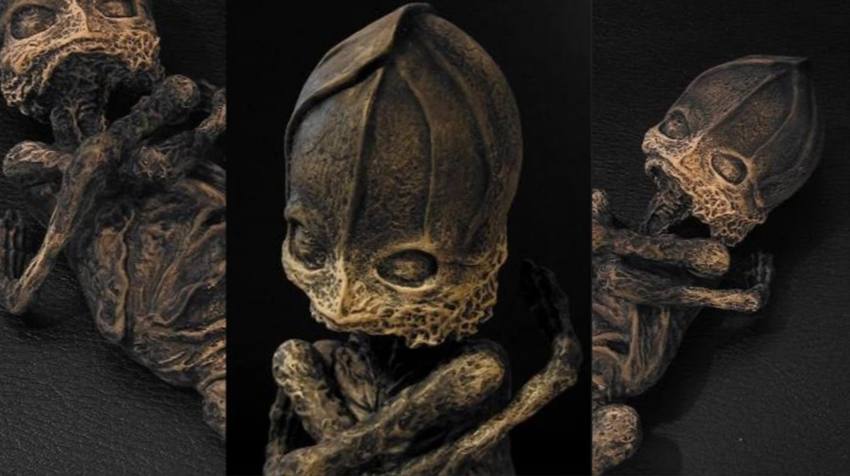 Alyoshenka (diminutive of the Russian male first name Alexey) or the Kyshtym Dwarf – anthropomorphic artifact, representing unidentified mummified remains of biological origin, found in 1996 near the southern outskirts of Kyshtym in the village of Kaolinovy, Chelyabinsk region of Russia.

A strange “creature” was discovered in May 1996 in the village of Kaolinovoe near Kyshtym by a pensioner Tamara Vasilyevna Prosvirina, suffering from mental illness. A lonely pensioner received a “telepathic order”: get up and immediately go to the cemetery.

However, the pensioner was often at the cemetery because of a mental illness, gathered flowers there and even brought photos of the dead taken from the monuments to the house.

Tamara Vasilievna was, in general, calm, did not offend anyone, and only occasionally in times of crisis turned out to be in a psychiatric hospital. So, the fact that she was not scared by the dark night of “strolling” in the cemetery is not strange.

Another thing is strange: going to the “call” woman found the one who called her… A tiny creature with huge eyes only very remotely resembled a human baby, but it was squeaking plaintively, and the compassionate old woman decided to take it with her – wrapped it in some kind of rag, brought it home, fed and started calling her “new son” Alyoshenka.

The mysterious baby lived with Tamara for only three weeks. Neighbours began to notice something strange in her behaviour: where have you seen it so that an old woman could have a baby? The villagers turned to the doctors, and they had put the old woman in a psychiatric hospital. She cried and repeated that a child remained in her house unattended…

However, as it turned out, Tamara had no hallucinations. A mysterious creature was seen by her daughter-in-law and a relative Galina Alferova.

But the busy women did not attach much importance to the “unknown little animal”, because there was no harm from it: it was drinking some water from a spoon, sucking on caramel, curd, milk.

Left in an empty house without the minimal care that grandmother rendered him, the strange “baby” died.

“Alyoshenka” was discovered by the police during a search. A little corpse was in a dried, wrinkled condition, it had a lot of folds of the skin.

After that, many experts examined this corpse – like pathologists, and gynaecologists, and they all claim that it is not a human corpse and not a baby corpse. He looked completely different.

The structure of the skeleton and the skull was not at all human. Even if a certain creature can mutate very strongly, then to such a degree it is impossible.

The remains were of interest to ufologists, and since it was not a human corpse, “Alyoshenka” was handed to them. For a long time, the mummy passed from hand to hand, and then disappeared… Ufologists claim that it was abducted by aliens, but one “New Russian” from Yekaterinburg is telling that it is in his personal museum.

However, it is impossible to say for sure where the unknown creature is now.

Advertisement. Scroll to continue reading.
In this article:Alyoshenka, mysterious creatures