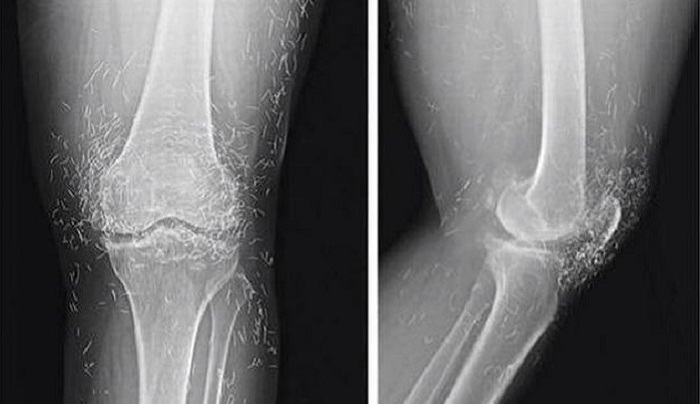 For thousands of years, humanity has invented new “methods” to deal with chronic pain.

Almost everything is used – from snake oil and bee stings to music therapy and meditation. But one of the weirdest and scariest remedies is putting gold needles under your skin.

A few centuries ago, in the Asian acupuncture, small needles (or rather thin short threads) made of gold were used. Now, this method is practiced in some places and remote areas of Korea, China and other countries.

These numerous small “white worms”, clearly visible in the X-ray images below, are in fact hundreds of gold needles embedded by the healer under the patient’s skin. This procedure is not cheap at all.

It is usually performed by a person without medical background who often does not even wash his hands before the procedure. A special acupuncture needle is used to insert the pieces of gold thread under the skin.

Gold sticks are inserted into the part of the body that is suffering from pain. If a toothache – the gold is inserted deep into the gums, if it is in the knee – under the skin of the knee, etc. Subsequently, because of body movement, the rods can go deeper into the flesh and even to the bone.

Gold is believed to be “pure metal” and will not cause infections in the body. The brain will send pain impulses that will be transferred from the body to the gold needles and therefore, the patient will not have pain at this location.

No doctor or doctor has yet confirmed that such a procedure saves pain. But, doctors report people who have sought their help who already have very serious health problems as a result of the gold needles in their body.

Recently, in an American magazine New England Journal of Medicine an article by Seoul doctors about a similar procedure was published, with pictures of their patients.

In particular, there is the mention of a 39-year-old Korean woman who has been trying to cure her chronic headache with acupuncture with gold needles for many years. However, instead of relieving her suffering, inflammation was formed in places where the needles were under the skin.

Another issue besides inflammation is the aforementioned “migration” of the gold needles inside the patient’s body. When these filaments reach the nerves, they can cause even more pain.

On their way into the body, the needles break into smaller parts, which later makes it difficult to remove them with surgery.

The same medical journal mentions a 73-year-old patient who treated her headache with such needles and received convulsive twitches on her face instead of relief – gold needles damaged her facial nerves.

Most commonly, the mad gold thread treatment is used to treat arthritis, headache and back pain.

In this article:chronic pain, gold needles