One of the topics that has been gaining momentum in the world media in recent days has been the theme of a new strange virus spreading from China, the history (and secrecy) of which, as we have noted earlier, may end with unknown results. That is, either it will be another scarecrow similar to the early 2000s “bird flu”, or a sad cycle of epidemics will begin such as in 1820 (cholera), 1920 (Spanish), 2020 etc.

Since this whole plot is being discussed very widely, it so happened that during discussions about this new virus, the so-called “7 fires prophecy” surfaced, known today to very few in the United States.

The fact is that in this prophecy a certain disease is mentioned that will mow down the whole world, after which something like the Last Judgment will begin, followed by the landing of aliens. 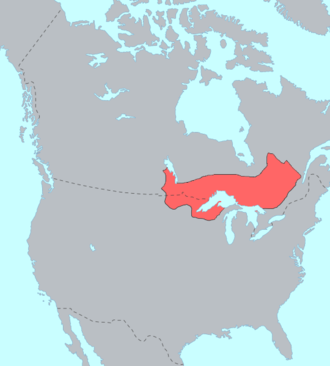 The map above shows the territories of the settlement of the Indian Ojibwa, Chippewa and Anishinaabe. Today, the whole world has heard about the evil Iroquois and, as it were, the good delaware, glorified by Fenimore Cooper. However, the anishinaabe did not document much into literature, since they were engaged in agriculture more than the extraction of scalps and grew something like wild rice.

Anthropologists do not really know where the anishinaabe came from, but in North America these people somehow strangely repeat the history of Jews in the Middle East. In some time immemorial, some of the Creators who emitted light, came to their elders, handed them a code of laws and ordered them to move towards the Great Lakes, where there would be for them, as it were, the “Promised Land.” The Indians loaded the wigwams on sleds and set off.

Since the Great Lakes were indicated by the Creators quite accurately, the bulk of the Anishinaabe settled there, cultivating rice, however, some tribes liked the prairies more and, instead of wandering around the crowd to the West, they went towards Texas, where then many new tribes appeared.

Anishinaabe knew a certain degree of writing, using drawings on birch bark and a kind of nodular writing – their shamans wore belts embroidered with small beads, where ancient texts were recorded. In particular, the Creators gave them “The prophecy of the 7 fires”, which for the Anishinaabe Indians is something like the “Old Testament”. In their version, the following are written:

First Fire: During the First Fire, the Anishinaabe people will leave their camps by the sea and set off to build a wigwam to the land chosen for the Anishinaabe. At the end of your journey you will find a turtle-shaped island where food will grow on the water. This place will become a source of unity and great strength for the tribe. But if you do not move, you will be destroyed.

Second Fire: You will recognize the Second Fire when you camp near a large body of water. At this time, the direction of movement will be lost, but a boy will be born in the tribe, who will show you the way.

Third Fire: In the Third Fire, the people of Anishinaabe will find their way to the promised land in the west, where they must move their families. This will be the land where food grows on the water.

Fourth Fire: Your future will be written on the faces of people who have white skin. If they come to you with faces of brothers, the time will come for wonderful changes for future generations. White people will bring new knowledge and the two nations will unite to create a new nation. Two more will join this new nation, so that four will form the most powerful nation of all. But you should also beware of the pale skinned. Their hearts will be filled with greed for the riches of your land. You must be careful because the face of brotherhood and the face of death are very similar.

Fifth Fire: During the Fifth Fire, there will come a time of great struggle that will take over the lives of all local people. With the decrease of this Fire among people will appear one who promises great joy and salvation. If people accept this promise of a new path and abandon the old teachings, then the Fifth Fire struggle will be with people for many generations. The promise that will come will be a false promise. All those who accept this promise will die soon.

Sixth Fire: During the Sixth Fire, it will become apparent that the promises of the Fifth Fire were false. Deceived by this promise, people will turn their children away from the teachings of the Elders, and their grandchildren will rise up against the Elders. Elders will lose the meaning of life. And at this time a new disease will come to people. The balance of many tribes will be disrupted. The cup of life will spill and become an empty cup of death.

WHERE WE ARE NOW – THE FIGHT TO RETURN BACK.

Seventh Fire: During the Seventh Fire, New People will appear. In those days, the waters will be poisoned, most of the forests and prairies will disappear, animals and plants will die, and the air will lose its vitality. At this time, new people will come who will emerge from the clouds. And then a light-skinned tribe will have a choice between two roads. One road will be green, lush and very happy. The second road will be black and charred, and walking along it will cut off their legs. If they choose the right path, then the Seventh Fire will ignite the Eighth and final Fire, the eternal flame of peace and brotherhood. If the fair-skinned race makes the wrong choice of roads, the destruction that they brought with them will return to them and bring a lot of suffering and death to all the people of the world.

Unfortunately for everyone, today there is no single, complete and perfectly accurate translation of this prophecy into English. It is not a few years old, generations of shamans have changed it a lot, the written language of the Indians leaves much to be desired, after which different translations into English followed. But the general meaning is reflected in all variants of the same.

That is, some “Creators” (“Martians” or people who survived from the previous flood) came to the local shamans, outlined what to do and predicted that they needed to wait for the arrival of white people, the construction of some kind of mighty state, followed by plague and pestilence followed by “people from the clouds”.

What kind of plague it will be, what kind of “dark road there is, the journey along which will cut off your legs” – we do not know. However, judging by what is happening around, the times described in the prophecies are close, so we wait for the “green men” to start jumping from the clouds, which in some versions of the prophecies, for some reason, appear as “clouds of illusion”.