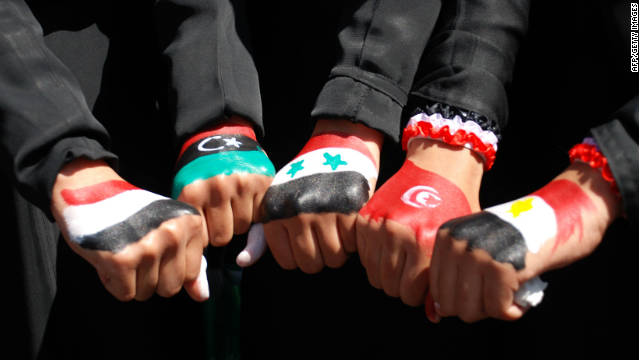 Many oil-producing nations such as Saudi Arabia, the US, the UK, Japan and Kuwait have pledged $165 million to fund an intitative of the World Bank that will allegedly prop up countries that have been affected by manufactured Arab Spring uprisings.

The IMF and the World Bank, at a meeting in Tokyo, focused talks on the Middle East and their economies of which recent Arab Springs have paved the way for globalist influence in the region. Kim Yong-Yim, newly appointed president of the World Bank remarked that these revolutions have allowed for the international community to refine their development of such areas.

In burgeoning nations, the World Bank and IMF have traditionally given loans to governments that would be impossible to repay. In exchange, the sovereignty of those nations is compromised as the World Bank demands repayment in natural resources. The succession of multi-national corporations in those countries is evidence of the swindle the IMF and World Bank preformed along with the International Financing Institution that forces a grave reduction of governmental spending with the initiation of austerity against the people of those nations.

The World Bank defines “civil society” as being transformed by what they refer to as perfect opportunities to stabilize the economy of a nation in terms of bringing them to the whims of the international community by way of unplayable loans within a volatile revolutionary setting.

At a meeting held in 2011, the World Bank postulated on how “international financial institutions [can] facilitated citizen empowerment” by way of manufactured uprisings. Through the use of civilian armies protesting against their government, the World Bank sees grand schemes whereby they can manipulate the developing situation and implement public policies that suit their agenda by coercion.

As the IMF and World Bank continue to move under cover of an ignorant populace, their hand in the destabilization of nations goes unnoticed. In the countries they control through economic terrorism, it is abundantly clear how much influence they wield.

As fake revolutions continue to plague the Middle East, their ardent cry for “democracy” imbues the UN and other globalist entities to aid with seemingly friendly support of the transitions taking place.

In 2011, Canadian Prime Minister Stephen Harper asserted that international aid to post-revolutionary countries should be facilitated by the central banks in those countries and announced at a G8 summit that Canada would not be directly offering “financial assistance” to those countries implanted with Arab Springs.

It is believed by globalists that Arab Springs are the “only bastions against extremism in the Arab World.”

The World Bank is focusing on controlling private sector development once these nations are toppled by internal uprisings. Once in those places of power, the international community can assess how a nation is able to hide their wealth and use international mandate to retrieve assets in off-shore accounts or trustee corporations.

The Arab Forum on Asset Recovery which was held on September 11th – 13th of this year, coalesced the Deauville Partners to speak under the organization of Qatar and the US Presidency of the G8 countries.

Through internal meetings held at specified intervals, the assets of nations in need of recovery will be decided based on intelligence provided by the Deauville Partnership in conjunction with Arab Countries in Transition.

In May at Camp David, the G8 Summit recognized the necessity of dealing with the Middle Eastern countries afflicted with Arab Springs and their commitment to maintaining control over their transitions into “democratic” governments so that their grip on natural resources would not falter under the blanket of nation building.

Un Secretary-General Ban Ki-moon has made Arab Springs his top priority and is committing the resources of the international community to moving these nations “toward democracy”. Ban said that he encourages the younger generation to rise up against their governments and expressed disappointment at the Occupy Movement for not being as effective as other manufactured revolutions.

Based on the Counterintelligence Program (COINTELPRO), the Federal Bureau of Investigations (FBI) have been infiltrating, surveying, discrediting and disrupting domestic political organizations.

Some of the groups compromised by COINTELPRO are:

There is also a long history of pre-meditated social unrest which is manufactured by governments to control the flow of “grassroots efforts” and engage in psychological operations against the general public.

The Occupy Wall Street Movement (OWS) began its career after the US government finished its hand in the Arab Springs that toppled governments in Egypt and other Middle Eastern nations. To make sure that OWS was successful, the CIA imported Ivan Marovic who was an integral component in creating and organizing the Egyptian citizens against their government. Marovic was placed in New York City to assist the burgeoning OWS and provide guidance.

Evidence of this can be found in the symbolism of OWS. Immediately the icon of the fist was adopted, which was a favorite of Marovic because of its effect on the psychology of the would-be protesters. Another technique of Marvoic is the “mic check” mind-control tricks of having the crowd mimic the words of the facilitator thereby inciting enthusiasm by escalating the momentum of the crowd.

At the most recent UN General Debate , UK Prime Minister David Cameron implored the UN to stay in its support of the Arab Spring movements and that given more time, the globalist definition of democracy would be installed. Supporting Cameron, European Council President Herman Van Rompuy explained that “achieving lasting change takes time.”