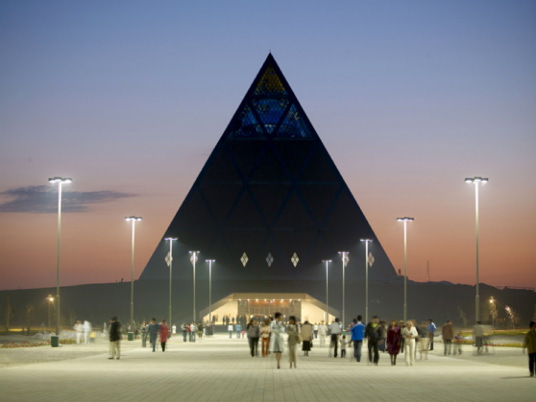 Astana is the first capital being built in the 21st century and it perfectly represents  where the world is headed. It is truly one man’s vision: Nursultan Nazarbayev, the president of Kazakhstan (yes Borat’s country, I know). Backed by billions of petrodollars, the city is being built from scratch in a remote and deserted area of  the Asian steppes.

The result is astonishing: a futuristic occult capital, embracing the New World Order while celebrating the most ancient religion known to man: Sun Worship. The city is still a huge construction site, but the buildings that are already completed already sum up Nazarbayev’s occult vision.

Conceived by Britain’s most prolific architect, Lord Norman Forster, this giant pyramid is an odd presence in the middle of the Asian Steppes.  The building is dedicated to  “the renunciation of violence” and “to bring together the world’s religions”. Norman Foster has said that the building has no recognizable religious symbols to permit the harmonious reunification of confessions. In reality, the pyramid is a temple for the occultist’s only TRUE religion: Sun worship. A journey inside this building is a truly symbolic one. It represents each human’s path to illumination. Let’s take the tour.

“The initiates accepted the pyramid form as the ideal symbol of both the secret doctrine and those institutions established for its dissemination” -Manly P. Hall, Secret Teachings of All Ages

As Manly P. Hall  stated, the pyramid is the ultimate symbol representing the mysteries of ancient civilizations. Sublime in their simplicity, divine in their proportions, they embody both the divine knowledge owned by the illuminated and the bewilderment of the masses.

Today’s elite, initiated to the occult, are the heirs of this ancient wisdom and use the pyramid as a symbol of power in the modern world. The illuminated/floating/missing capstone represents the divine principle present in the universe as well in each human being. Another symbolic meaning attributed to the missing capstone is the unfinished nature of the New World Order.

It is said that the capstone of the Great Pyramid will be reinstated when this age old project will become reality. Here are other pyramids appearing across the world, representing the elites power over the masses.

Inside the Golden Globe

Visitors can go at the top of the tower and get a wonderful view of Nazarbayev’s city. There are also some strange items to look at. Inside the globe we find this enigmatic “thing”. It’s a golden triangle with president Nazarbayev’s handprint in it. Why? I honestly don’t know. All I can say is that it looks like something out of the movie Total Recall.

Two pillars and one in between, further away. Is there a chance that this may be Masonic symbolism?

Yes, the twin golden pillars represent the two pillars of Masonry named Boaz and Jachin. I won’t go into the whole symbolism behind those pillars, but we can probably assume that Nazarbayev is a “Free and Accepted Mason”.

Placed in a commanding position in the city, the Presidential Palace sits at the end of a ceremonial route which starts with the Bayterek tower. A big fat dome sits on top of the palace, representing the female principle, in opposition to the phallic Bayterek tower – the male principle. This layout is present in almost all important cities, including Washington DC and Paris.

Gigantic Pentagram Found in Kazakhstan – Can Be Seen in Google Maps

A gigantic pentagram was found in Google Maps in an isolated region of Kazakhstan, West of the city of Lisakovsk (coordinates +52° 28′ 47.14″, +62° 11′ 8.38″). The circle’s circumference is over 1000 feet wide and contains a clearly defined, mathematically correct pentagram. The pentacle (a pentagram inside a circle) is used in ritualistic magic and the inverted pentagram is used in black magic.

The logo of the Church of Satan – the Sigil of Baphomet – consists of an inverted pentacle with the goat of Mendes.

A few days ago, when one would zoom into the pentagram with Google Maps, two strange locations would pop up, one named “Adam” and another “Lucifer”. However, since the story came out on the web, these locations disappeared and zooming into pentagram is now disabled.

This is what you get when you try to zoom into the pentagram.

Since yesterday, there is Russian text appearing on the pentagram which is apparently translated to “unfinished summer camp Denisovsky area Kostanay Kazakhstan”. Strange.

On Google Maps (which uses North-South orientation), the pentagram is inverted. Was it meant to be that way? Either way, the symbol is used in ritualistic magic.

Here’ what Manly P. Hall, a 33rd Degree Freemason and expert in occult symbolism wrote about the upright and inverted pentagram:

“In symbolism, an inverted figure always signifies a perverted power. The average person does not even suspect the occult properties of emblematic pentacles. The black magician cannot use the symbols of white magic without bringing down upon himself the forces of white magic, which would be fatal to his schemes. He must therefore distort the hierograms so that they typify the occult fact that he himself is distorting the principles for which the symbols stand. Black magic is not a fundamental art; it is the misuse of an art. Therefore it has no symbols of its own. It merely takes the emblematic figures of white magic, and by inverting and reversing them signifies that it is left-handed. A good instance of this practice is found in the pentagram, or five-pointed star, made of five connected lines. This figure is the time-honored symbol of the magical arts, and signifies the five properties of the Great Magical Agent, the five senses of man, the five elements of nature, the five extremities of the human body. By means of the pentagram within his own soul, man not only may master and govern all creatures inferior to himself, but may demand consideration at the hands of those superior to himself.

The pentagram is used extensively in black magic, but when so used its form always differs in one of three ways: The star may be broken at one point by not permitting the converging lines to touch; it may be inverted by having one point down and two up; or it may be distorted by having the points of varying lengths. When used in black magic, the pentagram is called the “sign of the cloven hoof,” or the footprint of the Devil. The star with two points upward is also called the “Goat of Mendes,” because the inverted star is the same shape as a goat’s head. When the upright star turns and the upper point falls to the bottom, it signifies the fall of the Morning Star.” – Manly P. Hall, The Secret Teachings of All Ages

As stated by Hall, “the average person does not even suspect the occult properties of emblematic pentacles” and occultists believe that this symbol has true power. Why is it in this remote location in Kazakhstan?

Some mainstream news sources such as the Daily Mail and Yahoo News quickly associated this story with “conspiracy theories”, stating that it might be a military site or a park. Some articles insist on the fact that the pentagram is Christian symbol while others state that it is Russian symbol. It is however important to point out that Russia used a five-pointed star as one of its symbols, not a pentagram inside a circle.

Advertisement. Scroll to continue reading.
In this article:astana, Sinister Sites