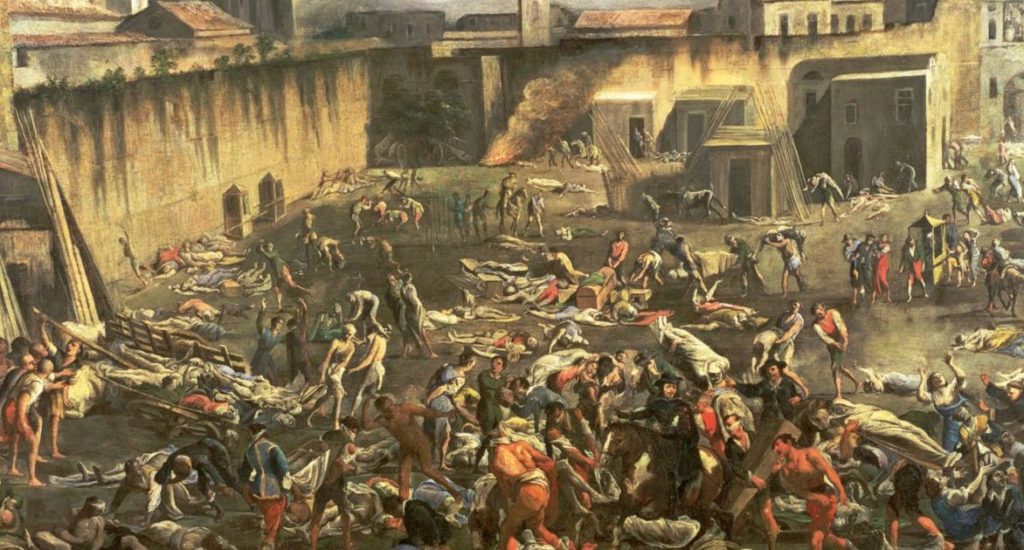 The rapidly spreading coronavirus COVID-19 has become almost the main topic of all the world media. The disease is already called the plague of the XXI century and it is predicted that in the coming days the number of cases will only grow. And how can you not remember the writers who spoke many years ago about the consequences of such epidemics! Stephen King, Jack London and even Giovanni Bocaccio are just some of the names that come to mind.

The artistic reflection of the theme of viruses is quite clearly seen in European literature: this part of the world is constantly being covered by plague epidemics. In November 1347, it appeared in Marseille, in January 1348, in Avignon, later in Venice, Genoa and Barcelona, ​​and by 1350 reached Poland. Mortality was terrifying, the disease carried away to half of the big cities and was perceived only as the punishment that the angry God sent down.

Describing the symptoms, contemporaries spoke of continuous fever, frequent breathing, and a terrible feeling of longing that gripped a person. However, as the Italian writer Giovanni Bocaccio claimed, there were people who were just amused by the the situation. “Open abuse of wine and entertainment, debauchery and songs in the streets, all kinds of satisfaction of passion, laughter and jokes about the most unfortunate events,” – he described the events of that time in his “Decameron”.

In another plague advice book of the time, the Italian theologian Nicolas of Burgo recommended that people should “beware of fear, anger, sadness, excessive anguish, heavy thoughts and similar things. And equally one should take care to be able to be joyful, to be happy, to listen to lullabies, stories and melodies”.

Similar scenes can be found in the historical novel “A Journal of the Plague Year” by Daniel Defoe, who spoke about London in 1665: “All kinds of crimes, scandals and excesses took place in the city.”

We don’t know what Jack London who wrote the book “The Scarlet Plague” a little more than 100 years ago, was guided by, but what he talked about is very reminiscent of today.

The novel takes place in 2013, when people suddenly learn about a disease previously unknown to them. First, a rash appears on the skin, then cramps begin. Scientists want to help, but they also become infected and die.

Later, the plague gets to  San Francisco, and the city instantly plunges into chaos. People try to escape from there in every possible way, but it’s too late: they are already infected. Ill people die right on the streets, electricity is turned off, transport stops working. “The time for noble deeds has passed. Civilization collapsed, everyone saved his own skin,” London wrote.

If you forgive the author a small error of seven years, the described is really alarming. Moreover, in recent days, the coronavirus began to disguise itself as dengue, manifested by high temperature and a rash. We are silent about convulsions. Fearfully.

“Where four million people once  lived, hungry wolves now roam,” the writer continued to prophesize, “and our feral descendants have to defend themselves with prehistoric weapons from four-legged robbers.” “The human race is doomed to plunge into the darkness of the primeval night, before it again begins a bloody ascent to the heights of civilization,” he added more and more.

According to the plot, out of millions of cases, only a few hundred people survived. They had to re-populate the Earth. The prospect, you see, is so-so, but a similar story is described by the Canadian writer Emily St. John Mandel. Her novel, Station Eleven, describes in detail how not only entire countries, but also continents, die because of a  single virus. You will not envy survivors (which is 1% of humanity): neither electricity, nor medicine, nor food. There is only one thing left: to unite and save each other as best they can.

Stephen King talks about the strange pandemic just as picturesquely. In his novel ‘Confrontation’, only 0.6% of people are not affected by infection; the rest are dying.

Explosions of violence, the collapse of society, and most importantly, the inability to stop a deadly disease make the existence of heroes look like a nightmare. Many survivors die: too cold and lonely in a world where there are no more relatives and loved ones.

“Life is a merry-go-round on which no one can stay for long,” the author writes. “And it eventually returns to the same place, closing the circle.”

By the way, King’s fans had previously suspected that many of his novels were prophetic. For example, the hero of the book The Dead Zone, which unleashed the Third World War, desperately resembles the current US President Donald Trump, although the thriller was written back in 1979. At the same time, the writer himself begs: no analogies!

“No, the coronavirus does not look like “Confrontation,” the science fiction writer said on his Twitter page, stressing that compared to the fake one he invented, the current pandemic is still blooming. “Keep calm and take all reasonable precautions.”

Advertisement. Scroll to continue reading.
In this article:Jack London, plague of the XXI century