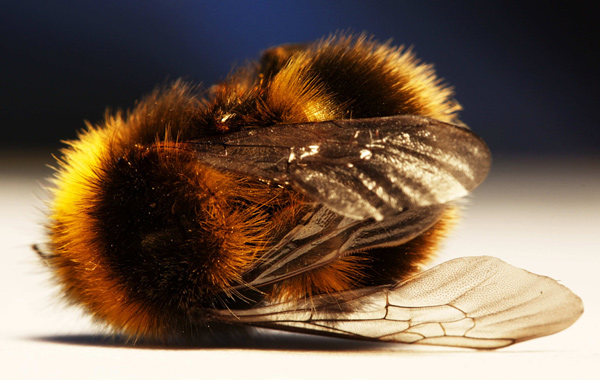 Nearly one-third of the world’s crops are dependent on honeybees for pollination, but over the last decade the insects have been dying at unprecedented rates both in the United States and abroad. A new study strengths the evidence linking pesticides to a phenomenon known as colony collapse disorder, but the decline of managed honeybee populations has also been blamed on a combination of disease, parasites, poor weather, and the stress of being trucked from orchard-to-orchard to pollinate different crops. We have few planned defenses against a honeybee disaster. The Farm Bill passed last June allocates less than $2 million a year in emergency assistance to honeybees. “The bottom line is, if something is not done to improve honeybee health, then most of the interesting food we eat is going to be unavailable,” warned Carlen Jupe, secretary and treasurer for the California State Beekeepers Association. Honeybees as a species are not in danger of extinction, but their ability to support the industry of commercial pollination, and by extension, a large portion of our food supply, is in serious danger. Here we take a hypothetical look at how the human diet and lifestyle would change if honeybees and other bee pollinators disappeared from our planet one day. A world without honeybees as a stable source of pollination would mean a world without fruits, vegetables, nuts, and seeds. This is the worst case scenario. It’s possible that human ingenuity and alternate pollinators can mitigate some of these outcomes, but not necessarily all of them.

If their cultivated bees continue to die out, beekeepers who make their living by managing bee colonies will go out of business. Without commercial beekeepers, farmers will not be able to scrape together enough bees to pollinate their fields. If the farmer does not provide fields or orchards with enough honeybees for pollination, the whole harvest can fail. The majority of fruits and vegetables would go away. That includes apples, cherries, blueberries, avocado, broccoli, most leafy greens, cucumbers, pumpkins, and many more. Almonds, which use two-thirds of the nation’s managed honeybee colonies, would be one of the first crops to disappear without bees. Without any pollination, an almond orchard would produce less than one-sixth of what it will produce with pollination, according to Carlen Jupe, of the California State Beekeepers Association. Almonds make a tasty snack, but they are also used in cereal, baking, and many other food products — all of which we would lose if almond crops collapse. Additionally, almond hulls, or shells, are often ground up and used as feed for cows. If cows don’t get the proper nutrients, they can’t produce milk. If there’s not enough cow’s milk, there will be less dairy products like cheese, yogurt, and ice cream. These products will also be more expensive. Bees are also valued for their honey. One crop, clover, is an importance source of nectar that bees must eat to produce honey. Lack of bees for pollination can mean the loss of the clover crop, and in turn, the bee’s honey. If bees can’t make enough honey, then honey producers will go out of business.

The cosmetic industry, which uses honey as a skin moisturizer in many creams, soaps, shampoos, and lipsticks, will also suffer. Oilseeds like cotton, sunflower, coconut, groundnut, and oil palm, which either depend on or benefit from bee pollination would also wither away, eliminating more than half of the world’s diet of fat and oil. It’s not only cottonseed that’s important. Cotton makes up 35% of the world’s total fiber use and is the leading cash crop in the U.S. Without cotton, we would be stripped of countless clothing and household items, including blue jeans, shoe laces, towels, mattresses, and high-quality paper products. Across the world, alfalfa fields will perish, meaning beef and dairy cows will go hungry since these pastures are typically harvested as hay to feed cattle. Cows will starve if there is not enough good-quality alfalfa available to eat. There will still be plenty of pigs since they don’t eat much alfalfa. Staple grains, like wheat, rice, and corn will not be badly affected either, since these crops rely largely on wind pollination. Meaning our diet will be rich in high-fat pork products and bread. In this article:Bees, human diet, pollination