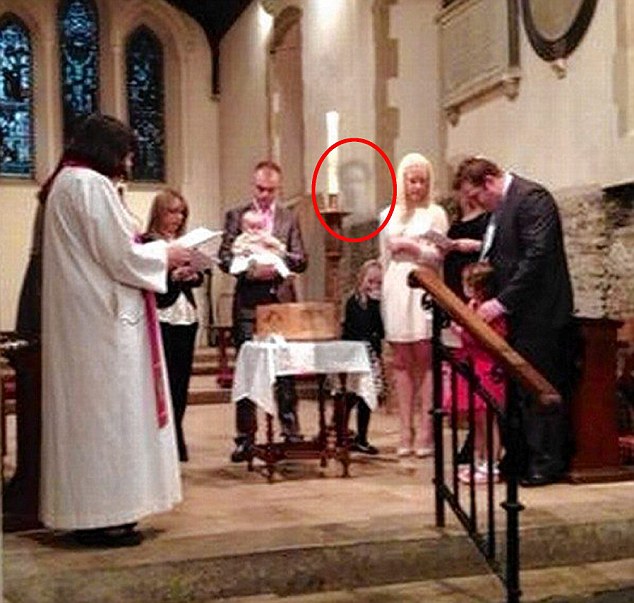 A grandmother was left astonished after a photo posted on Facebook from her granddaughter’s christening appeared to show the ghost of her late husband.

When Heather Sewell, 50, first saw the picture she immediately spotted the apparition, bearing a striking resemblance to her late husband Terry.

The black and white face can be seen above the church font hovering over baby Mia-Bella Kennett and the rest of the family.

Familiar face: The photograph taken at St.Martin’s Church in Canterbury was posted on Facebook. Only later did grandmother Heather Sewell notice the face, circled, bearing a striking resemblance to her late husband Terry

The bizarre image was caught on camera at St Martin’s Church, Canterbury, Kent by Mrs Sewell’s son Jamie, 29, on his mobile phone.

It was only when the grandmother-of-two was looking through the photos online later that she spotted the familiar face beside the family. Outline: Mrs Sewell said she was shocked when she noticed the face in the picture taken during her granddaughter’s christening

Mrs Sewell, from Petham, Kent, said she could not believe the likeness to her late husband.

Terry Sewell, who worked as a labourer, died 17 years ago after committing suicide aged 41.

Advertisement. Scroll to continue reading.
Mrs Sewell, who works as a taxi driver, said it was ‘upsetting’ to see her husband’s face.

She said: ‘ I tried to convince myself that it was not Terry – but it is so convincing that I believe it is.

‘Terry had a long face and so does the ghost and it has the same hair style as Terry had. ‘The ghost is also the same height as Terry was – about 5ft 8in. ‘I am quite a superstitious person, but I am not over-the-top. ‘I do believe there is something out there – there are too many things in the world we cannot explain.’

She added: ‘I was so shocked when I saw it, as we all were.

‘It looks very much like Terry. I know there has been no photo trickery so it is all very spooky and perhaps not what you want to see at a christening.

‘I was in the pub afterwards when I first saw the Facebook page and everyone was stunned because it’s so clear.’

St Martin’s is the oldest church in the country that is still in use for religious services, but a ghostly encounter has never been reported previously at the church.

Heather’s daughter Gemma Sewell, 27, and her partner Jamie were joined by their older daughter Jaiden, 5, and two sets of godparents for Mia-Bella Kennett’s Christening.