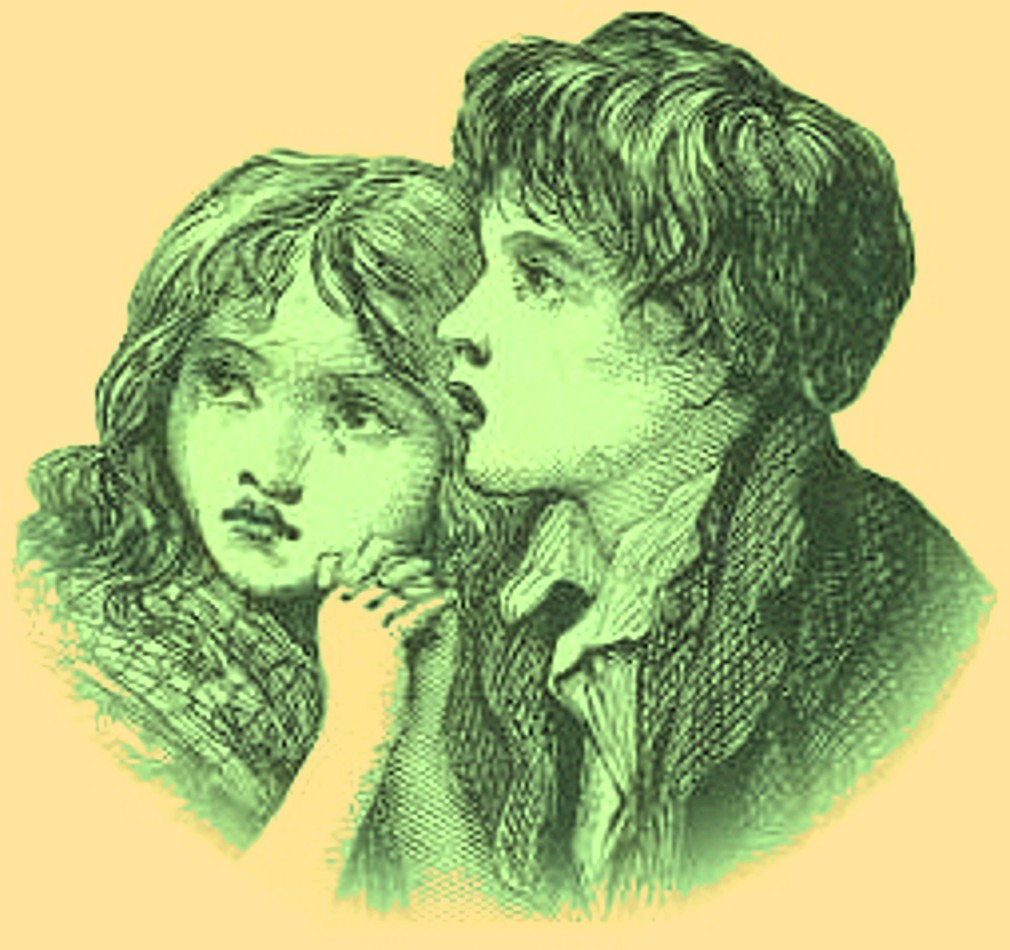 If we are to believe the medieval chroniclers, during the Middle Ages Britain was a land not unaccustomed to the appearance of many extraordinary marvels and miracles – but few were stranger than the unheralded arrival in Woolpit of the green children.
This extraordinary episode is believed to have taken place during the reign of either King Stephen (1135-1154 AD) or King Henry II (1154-1189 AD), both reigns occurring during an unstable time of great poverty and hardship for the ordinary masses, and it appears to have been first recorded by two monastic scholars, penning separate but closely corresponding versions during the early 1200s. One of these scholars was Ralph of Coggeshall, who, in 1207, was the abbot of a Benedictine abbey in the Essexvillageof Coggeshall. The relevant passage, from his Chronicon Anglicarum, was translated into English from its original Latin by Thomas Keightley in his own book, The Fairy Mythology (1884). The other scholar was a well-educated Augustinian monk from Yorkshire, known as William of Newburgh, who documented the episode in his Historia Rerum Anglicarum.
Centre of modern-day Woolpit (Dr Karl Shuker)
In both versions, the locality where the strangely-hued visitors appeared was named as Woolpit, a small village just a few miles to the east of Bury St Edmunds inSuffolk. ‘Woolpit’ is a corruption of ‘Wolfpit’, for in the Middle Ages wolves still existed in Britain, and on the outskirts of this particular village were a number of deep pits dating back to ancient times that were traditionally used for trapping these creatures. However, it is possible that on at least one occasion these pits ensnared – or released? – two much more exotic entities. 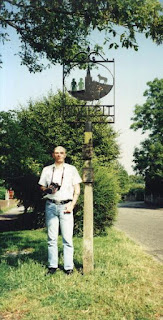 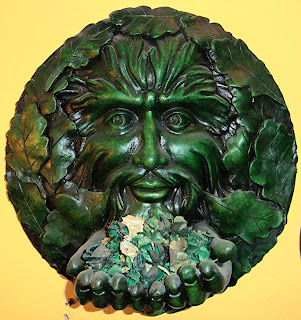 Ornamental wall plaque depicting the Green Man (Dr Karl Shuker)
Prominent among these is a mysterious entity known as Jack-in-the-Green or the Green Man, depicted as a shaggy humanoid figure covered not in hair or fur but in sprouting leaves instead, and sometimes merely as a foliate head. He is portrayed in many church carvings and decorations, including ornate misericords, tympana, fonts, tombs, roof bosses, and screens, and is also preserved in the name and signs of many pubs and inns. Variously classed as a pagan god, a tree spirit, or the personification of fertility and the renewal of life in spring, the Green Man’s complex symbolism as well as his longstanding association in art and religion is vigorously examined in William Anderson’s fascinating book Green Man (1990). 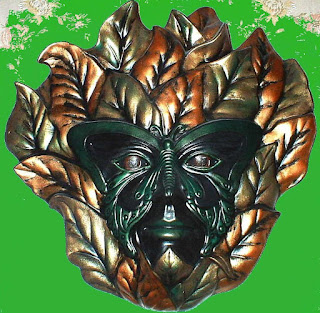 Another Green Man wall plaque (Dr Karl Shuker)
Equally noteworthy, and possibly allied to the Green Man, is the enigmatic Green Knight, as featured in a classic if anonymous 14th-Century poem, ‘Sir Gawain and the Green Knight’. It tells of a mysterious knight with green skin, wearing green armour, and riding a green horse who arrived uninvited one day at the hall of King Arthur and challenged his knights to trade blows with him. Only one, Sir Gawain, accepted the strange visitor’s challenge, and promptly chopped off his head – but instead of dying, the Green Knight merely picked up his severed head and told Gawain to meet him in a year’s time so that he could return the favour. When Gawain did so, his bravery was rewarded by the Green Knight’s failure to chop off his head – after which the knight revealed himself to be Sir Bertilak, at whose castle Gawain had been staying while awaiting his potentially fatal meeting with the Green Knight. 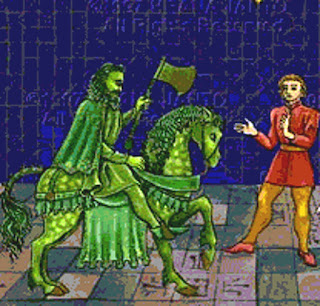 Gawain and the Green Knight (artist unknown to me)
This eerie tale has a direct link with Faerie, because it transpired that Sir Bertilak was transformed into the Green Knight by the enchantment of King Arthur’s half-sister, Morgan Le Fay, and as with so many fairy links the colour embodying the enchantment was green. Green is, in any event, the favourite colour for fairy clothing, and some fairy beings, particularly elves, are often described as green-hued. 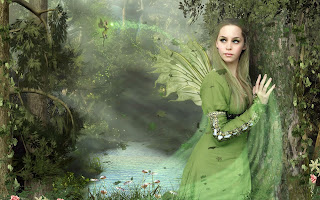 Green is the colour of Faerie and fairies
Even the landof Faerieas described in traditional folktales bears a degree of resemblance to the Woolpit green girl’s account of St Martin’s Land. While journeying through Walesin 1188 AD, Giraldus Cambrensis documented one such story – concerning the visit to Faerie by a boy called Elidor – in his subsequent narrative, Itinerarium Cambriae. Translated into English by R.C. Hoare, it includes the following description of Faerie:
“…a most beautiful country, adorned with rivers and meadows, woods and plains, but obscure, and not illuminated with the full light of the sun. All the days were cloudy, and the nights extremely dark, on account of the absence of the moon and stars.”
Nor should we forget the legendary outlaw Robin Hood, dressed in Lincoln Green and sharing the sylvan seclusion of Sherwood Forest with Maid Marian and their band of Merry Men – for Robin and Marian are sometimes likened to or even directly homologised with the King and Queen of Faerie.
Robin Hood – Louis Rhead (1912)
Particularly pertinent to the folklore facet in seeking an explanation for the green foundlings of Woolpit is their especial liking for beans. According to ancient Celtic tradition, beans are the food of the dead – the sole sustenance of resurrected corpses and ghosts – thus enhancing the unworldly aura already encompassing these weird children.
The Middle Ages were extremely credulous, unscientific times brimming over with portents, misconceptions, exaggerations, and superstitious fancies of every kind. Hence it is a very hazardous task attempting to distinguish between fact and folklore, hearsay and truth when analysing accounts from this period. The green children of Woolpit may be nothing more than an imaginative rumour or fairytale given a semblance of substance by uncritical or distorted chronicling, but it is unlikely that this theory can ever be adequately tested.
‘Family Tree’ (Robert M Williams)
A very different and far more dramatic explanation was proffered by Harold T. Wilkins, an investigator of unexplained anomalies. In his book Mysteries: Solved and Unsolved (1959), Wilkins boldly proposed that the green children may have entered our world from a parallel version (existing in a separate dimensional plane but directly alongside our own), by accidentally passing through some form of interdimensional ‘window’ bridging the two.
Other writers have offered the equally radical scenario of a vast but gloomy subterranean world linked to our own by a worldwide labyrinth of interconnecting tunnels, and inhabited by a mysterious race of advanced humanoids, two of whose children accidentally became lost in one such tunnel and eventually wandered out into our own sunlit world above-ground.
Another dramatic proposal is that the green children are extraterrestrials. As long ago as 1651, Robert Burton opined in his tome Anatomy of Melancholy that they may have come from Venus or Mars. Much more recently, the extraterrestrial hypothesis has been pursued enthusiastically by astronomer Duncan Lunan, assistant curator atScotland’s Airdrie Observatory. Based upon the children’s description of their twilit St Martin’s land, and the great river separating it from a luminous land beyond, Lunan has speculated that they may have originated from a planet whose one side permanently faces the sun and whose other is permanently cloaked in darkness with a twilit zone sandwiched between them. As for the great river, Lunan has postulated that this is actually a huge canal that encircles the entire planet and is used for planet-wide thermoregulatory purposes. He believes that they must have reached Earth by teleportation, and has suggested that this was accompanied by a bright auroral display, thereby interpreting the children’s description of a sweet sound of bells as a visual rather than an aural stimulus.
Bearing in mind, however, the claim by both contemporary chroniclers of the green children episode that once the two began eating normal food their green skin colour slowly vanished, and that the girl grew up into a typical-looking woman and married locally (there are even claims that some modern-day descendants of her lineage exist today, including one branch in the USA), it seems unlikely that they belonged to some alien species. 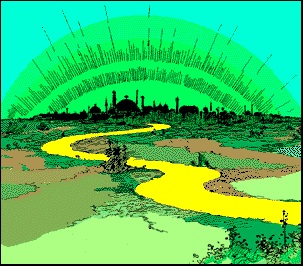 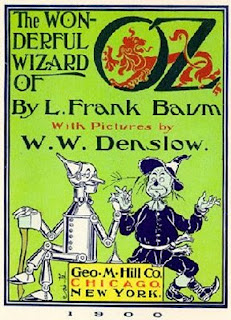 Title page from the first edition of L. Frank Baum’s novel The Wonderful Wizard of Oz (1900)
Several years ago, I visited Woolpit to see for myself the various relics there commemorating the history of the green children. These include the tall, elegant village name sign standing not far from St Mary’s Church that depicts the two children, the church, and a wolf; the colourful banner of the church that also depicts them; and a scroll inside the church on which the history of the green children is enscribed. Walking through St Mary’s Church, moreover, I was surprised to find a most unexpected correspondence between Oz and Woolpit.
A mythological winged creature carved at the end of a pew in St Mary’s Church, Woolpit (Dr Karl Shuker)
The church contains numerous carvings of animals, some real and others mythological, but one of the most startling of these, perched at the end of a pew, is an extraordinary composite beast that looks remarkably like a flying monkey!
The winged monkey carved on a pew inside St Mary’s Church, Woolpit (Dr Karl Shuker)
In The Wizard of Oz, Dorothy and her friends were, of course, pursued and harried by a flock of flying monkeys sent by the Wicked Witch of the West. Meticulously carved, with every feather beautifully delineated, this mini-masterpiece may be an opinicus, i.e. a griffin-related hybrid, sometimes combining a simian face with a lion’s body and the plumed wings of an eagle – yet another bizarre being finding shelter in the magical village of Woolpit. 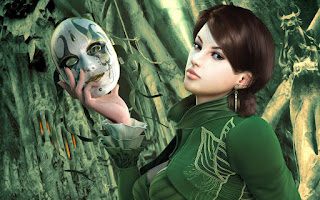 Green – the colour of magic and mystery
In this article:green children, Woolpit 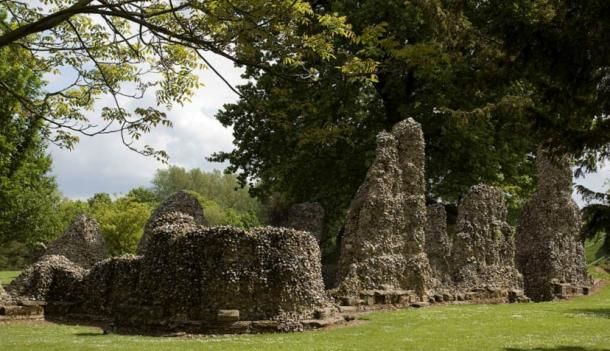 The green children of Woolpit: the 12th century legend of visitors from another world

April Holloway Ancient Origins The Children of Woolpit is an ancient account dating back to the 12th century, which tells of two children that appeared...