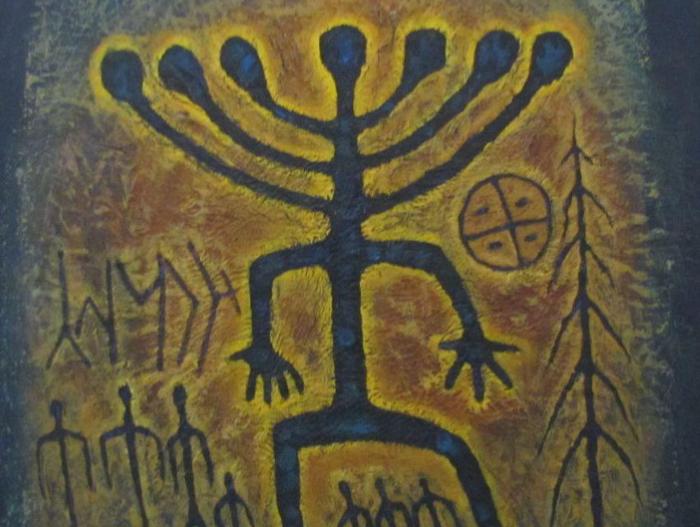 American scientists made a rather amazing discovery. It turns out that even in ancient times, Greeks and Aztecs worshipped the same seven-headed deity.

After studying the petroglyphs, it was discovered that in the pantheon of both of these people there is a mysterious creature depicted in the form of a seven-headed hydra.

Immediate attention to this extraordinary connection between these cultures is drawn as this image cannot be confusing, this is the seven-headed hydra that menorah described in the Bible as well as an Indian deity and many examples from other people of the ancient world. An illustration of a seven-headed monster was also discovered in Altai. It is believed that it was created about five thousand years ago.

In the lower left corner of the picture you can see the runic inscription: “Manaka”. To the right is a tree – a symbol of the Milky Way, which was also a sacred symbol of the Turks.

After studying the Aztec pantheon, almost identical images of another creature with seven snake heads were found.

This image can be found in ancient temples throughout Mexico. In short, it is a creature with seven snake heads.

An interesting addition to this story is the existence of an Aztec fertility deity named Chicomecōātl- her name translated means seven snakes. She was a mother goddess who uses the sun as a shield. Notice that her sun shield looks exactly like the image of the sun on the Siberian petroglyph below.

However, this is not all. No less interesting correlations appear in Hinduism. There is a goddess of fertility, who is sometimes portrayed as a woman whose head is surrounded by seven snakes.

She is called the goddess Manas, therefore, at least the first part of her name corresponds to the inscription on the petroglyph.

In Hinduism, the goddess Manasa Devi or Mansa Devi is considered the queen of snakes, whose worship is very popular in eastern India, and especially in Bengal, Jharkhand and Orissa. The cult of Manas Devi, according to researchers, is one of the most ancient cults of India. Historians claim that she was worshiped in pre-Aryan times.

Such unexpected relationships between distant cultures may indicate that Eurasian nomads are involved in the resettlement of America.

In Eurasia, the seven-headed deity was also worshiped by the Assyrians and Sumerians, who called the snake Mushman. After all, Greek mythology also tells the story of the Lernaean Hydra killed by Hercules.

The name Hydra is associated with water. In Indo-European mythology, snakes and dragons were the guardians of water. The hero must defeat them in order to free the water and return fertility to the earth.

There were no traces here after the deification of this creature, although perhaps this was due to the demonization of pantheons hostile to Greek public policy.

However, the question arises, why did the nomads worship this seven-pointed deity? Since ancient times, people have known the constellation Hydra, whose peak consists of seven bright stars.

Chicomecōātl as the constellation Virgo

According to the nomads, it was this heavenly dragon who created the Milky Way. Stories about the mother goddess could give her the status of the creator of the world as a whole. Of course, there are those who will also conduct a literal analysis of these legends. Then the concept of the star goddess, associated with the heads of snakes, can cause associations with the famous Sumerian Annunaki and the theory of paleocontacts associated with them.

There are amazing parallels between Chicomecōātl and the constellation Virgo: Chicomecōātl holds ears of corn in his hand and sits on a seven-headed snake. Virgo holds wheat trees, and it is located right next to Hydra. The solar shield simply represents the Sun passing through these constellations.

The summer solstice was in Cancer (with the head of Hydra behind) from about 2500 to 500 BC. e. Well, that’s too much a coincidence, isn’t it?

Back to the sun shield symbol

Although this symbol probably refers to the sun, you may wonder why it looks like a cross with four dots. The answer to this question may lie in another famous episode from Hindu mythology – Samudra Mantan – churning of the ocean.

In short, this episode depicts the creation of the universe. Good and evil deities used the serpent god Vasuki (the brother of the aforementioned Manas) to rotate the mountains (axis mundi) and to froth milk (Milky way) to create the nectar of immortality.

The Hydra constellation, extending more than 100 degrees across the sky, was the longest constellation known to ancient people. Therefore, it is not surprising that it is the snake that moves the Mundi axis.

This event is celebrated in India at one of the most important festivals known as Kumbh Mela. According to legend, after the churning process was completed, four drops of nectar were shed in four different places in India. Since then, these four cities have become places of pilgrimage for this religious holiday. Each of the cities has its own celebration date. These dates are not fixed, they depend on the position of the Sun, Moon and Jupiter (Indra).

But if you look at the position of the Sun, you will see that it should be in the signs of Aries, Leo, Capricorn and Libra (one for each city). These four constellations depict the celestial cross on the zodiac, and in antiquity they were used to refer to the four seasons. Possibly, for this reason that the symbol of the solar shield has a cross and four points.

How the symbol of the semi-headed “deity” that we see on the 5,000-year-old Siberian petroglyph was spread all over the globe in those days when peoples could not contact each other?

Are the stories of Manas, Mushman or Chicomecōātl a trace of an unknown history of mankind? Naturally, this is only one common denominator that can testify to the whole spectrum of things. In principle, thinking about a period of history that we do not know well is a difficult and tedious task. It remains only to catch such unusual relationships so that the scientific community could not ignore them.