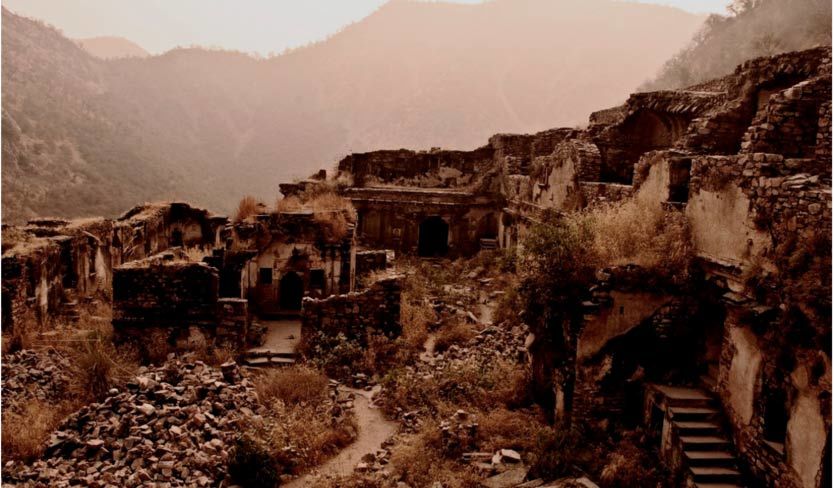 The abandoned fort of Bhangarh is thought to be the most haunted place in India, so much so that the Archaeological Survey of India has forbidden access to the site between sunset and sunrise, and locals have moved their town outside the limits of the fort. The reputation of Bhangarh stems from two old legends, one of which involves a Holy Man who supposedly cursed Bhangarh after the fort cast a shadow over his abode.

The town of Bhangarh, which is located in the Rajgarh municipality in the state of Rajasthan, was first established in 1573 during the rule of Bhagwant Das as the residence of his second son. The fort, which is actually a small city composed of temples, palaces, and multiple gates, covers a large area of land at the foot of a mountain. But despite its beauty and the picturesque scenery, the fort is steeped in dark tales and became completely abandoned by 1783, with locals moving their village elsewhere. Despite the picturesque setting of Bhangarh Fort, locals moved their town elsewhere and the site was abandoned over 200 years ago

Through the main gate of the fort city, now called the Bhoot Bangla (“House of Ghosts”), there are numerous Hindu temples. The most spectacular of these buildings are the Hanuman Temple, Gopinath Temple, Someshwar Temple, Keshav Rai Temple, Mangla Devi Temple, Ganesh Temple and Navin Temple.

The Royal Palace is located at the extreme end of the fort’s limits and was protected by two inner fortifications across the valley. The town is separated from the plain by ramparts with five gates. The Legends of Bhangarh

According to legend, the city of Bhangarh was cursed by a holy man named Baba Balnath, who had given permission for the construction of the town so long as the height of the buildings did not cast shadow over his retreat. Balnath warned that if this were to occur, he would destroy the entire city. When a descendant prince raised the palace to a height that cast a shadow over Bhangarh’s abode, it is said that he cursed the whole town. Many believe that Balanath is buried there to this day. © Wikipedia
Baba Balnath was a holy man who is believed to have cursed Bhangarh after its buildings cast a shadow over his abode. Gopinath Temple at Bhangarh Fort

A second legend is related to a wizard named Singhiya, who was in love with Ratnavati, the Princess of Bhangarh. According to this tale, Singhiya placed a spell upon a fragrance being purchased by the princess’ maid, so that upon touching it, the princess would fall in love with him. But Ratnavati saw what the wizard was doing and foiled his plan. Feeling bitter, the wizard was said to have placed a curse upon the city, and many believe his ghost haunts the ill-fated city. Some locals believe that princess Ratnavati reincarnated in a new body and that Bhangarh Fort is waiting for her return to put an end to the curse. © Wikimedia Commons
Locals believe that Princess Ratnavati must return to Bhangarh Fort to free the city from its curse.

While these legends seem like nothing more than fanciful tales, the stories have become so widely reported, and believed, that the Archaeological Survey of India has placed a sign at the entrance to Bhangarh Fort forbidding entry after dark. Locals say whoever has tried to stay inside after sunset have never come out. Nevertheless, it is these very tales that continue to attract thousands of tourists every year, eager to experience the haunted and cursed city of Bhangarh.

Bhangarh Fort: The ‘most haunted’ place in India? – Times of India.

In this article:Bhangarh, ghost city, India