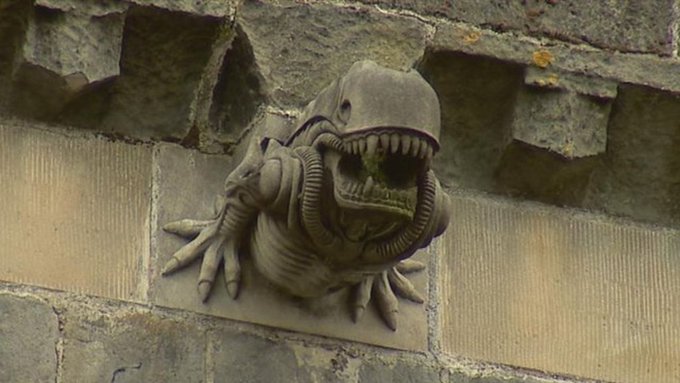 At the turn of the 6th-7th centuries, an Irish monk, known today as Saint Mirin (Mirren in another version) preached in Scotland. He founded a religious community, which in the XII century turned into a paisley abbey. The temple of this saint has become a pilgrimage center. But today he is known not only thanks to the activities of St. Mirin.

The gargoyle, carved high under the roof of the abbey, sparked a wave of discussions on social networks. The fact is that she suspiciously looks like a xenomorphic creature from the legendary fantastic thriller Ridley Scott’s “Alien” 1979.

Gargoyles in Gothic architecture were figures that illustrated evil through the form of superficially repulsive fantasy creatures. From a practical point of view, they were designed to drain water and prevent the masonry from raining. Often the gargoyles were unnaturally elongated to divert water from the walls as far as possible.

In the Middle Ages, it was believed that gargoyles scare away evil spirits and protect parishioners of the church. However, the gargoyle-xenomorph has a slightly different story. Rev. Alan Beers said that restoration work took place in the abbey in the early 1990s. In particular, 12 medieval gargoyles were replaced, which adorned the abbey for hundreds of years, but eventually collapsed almost completely.

Beers said the abbey signed a contract with a bricklayer from Edinburgh when a series of science fiction films combined by the Alien film universe was at its peak. However, the reverend believes that the mason was not going to copy a specific xenomorph, but used the general concept of the appearance of an alien.

Paisley Abbey plays a big role in the history of Scotland: the future king Robert II was born here, he spent his childhood here and received his schooling knight William Wallace, whose story is told in another Hollywood film – “Braveheart”.