Since the fall of 2019, when Betelgeuse, a star in the constellation Orion, began to show signs of an imminent transformation into a supernova, hundreds, if not thousands of astronomical instruments were sent to this region of the sky. The main ones are gravity telescopes and neutrino detectors, some of which can be viewed by a simple online search.

With neutrinos, everything is more or less normal, but on January 14, gravitational telescopes recorded the first gravitational anomaly that came from the Betelgeuse region:

When this area is observed under a higher resolution, two anomalies are discovered and Betelgeuse is located between them approximately in the middle: Astronomers do not know how to interpret this data, since gravitational waves are a concept no less dark than dark matter. In theory, this is a kind of ripple of space-time, which appears during the collision of very large objects – neutron stars and black holes.

For the first time, gravitational waves were discovered just in 2015, so the devices for recording them leave much to be desired. Their accuracy  is doubtful, there are often glitches, therefore, to say that the source of the anomaly is the area in the Betelgeuse region, and not at the star itself, is under question.

In addition, the propagation velocity of gravitational waves is unknown. According to one theory, these waves propagate at the speed of light. In this case, astronomers now see the perturbation of space-time in the region of the star, which occurred 700 years ago.

However, according to another theory, gravitational waves propagate instantly and astronomers are now observing the perturbation of space-time in the Betelgeuse region, which occurs in real time. However, whichever of the theories is correct, in any case, the space around Betelgeuse is deformed right now. Not very important – it was deformed 700 years ago or yesterday. the main thing is that there is deformation. And since there is a deformation, it means that there is no longer the Betelgeuse red supergiant, but a neutron star or a black hole – the theory does not know other reasons for space-time deformations. 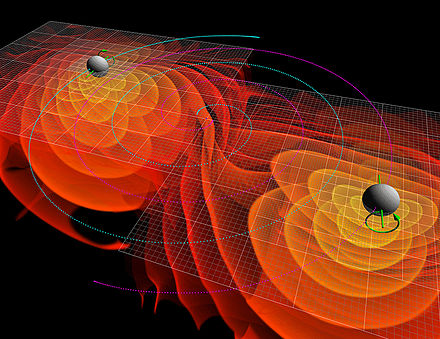 Nevertheless, according to the same theory, a black hole / neutron star appears only as a result of the collapse of a supernova nucleus, therefore, the news that Betelgeuse has become a supernova light will come to us in the very near future.

We don’t even know that this will begin, but we are following with interest the development of events: the deformation of spacetime accompanying the explosion may turn out to be such that the sky simply “curls up into a scroll”.

In this article:constellation Orion, supergiant Betelgeuse

Hubble photographed a dying star in the constellation Orion

The resulting image shows a magnificent planetary nebula, which is one of the stages in the evolution of a sun-like star. The Hubble Space...