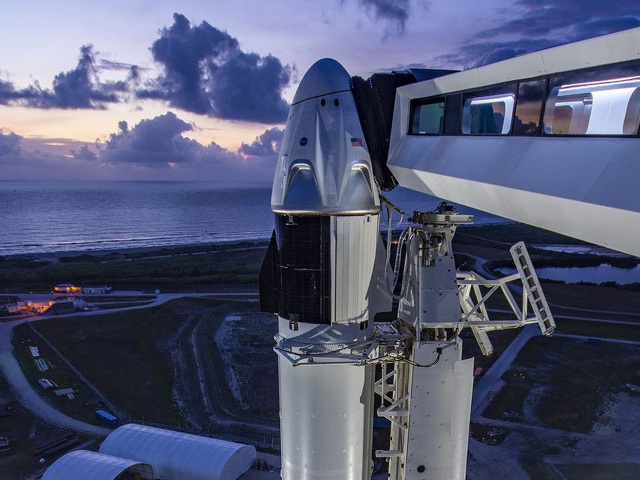 May 27, 2020 may go down in the history of astronautics as the day when people first reached the orbit of the Earth on aircraft, fully developed by a private company and owned by it. Previously, without the participation of state organizations, people were only launched into suborbital flights.

The SpaceX-created by Elon Mask, a partially reusable heavy Falcon 9 booster rocket and the Crew Dragon passenger ship, should launch today from the launch site at Cape Canaveral in Florida. The task – to deliver to the International Space Station two NASA astronauts, Doug Hurley and Bob Benken.

Elon Musk tweeted a photograph of the launch site this early morning:

The live broadcast of the launch, which is tentatively scheduled for 16:33 by the east coast of the United States, can be viewed on the official NASA YouTube channel:

As confirmed by CBS News in the press service of the White House, President Donald Trump, despite the ongoing epidemic of COVID-19, decided to personally attend the historic launch and will arrive at Cape Canaveral. Last week, Trump said he was “thinking” about visiting the cosmodrome and added that he would gladly send journalists on a rocket into space to get rid of them for a while.

The first SpaceX passenger ship, the Crew Dragon, is an evolution of the Dragon transporter, which has recently made several deliveries to the ISS. In total, it can take on board up to 7 crew members, but this time only two will fly, and the rest of the space will be taken by cargo.

The interior of the ship reminds of sci-fi films, and touch screens are used for control, as in electric cars of another company Ilona Mask, Tesla.

The last time the United States National Aeronautics and Space Administration (NASA) launched its astronauts from the United States on an American spacecraft in July 2011. After the crash of the “space shuttle” Columbia in 2003, it was decided to gradually phase out the shuttle program and focus on developing a new ship that would also be suitable for traveling to the moon.

The first manned space flight, organized by a private company, took place back in 2004 – the SpaceShipOne rocket plane with pilot Brian Bonnie on board, reached a height of 100 km above the surface in a suborbital flight and successfully returned to Earth. For comparison, the altitude of the orbit of the ISS, where the Crew Dragon astronauts go, exceeds 400 km.