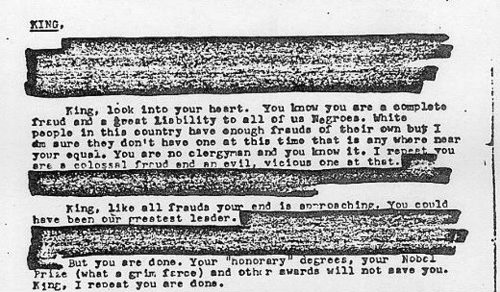 The anonymous note ends, “King, there is only one thing left for you to do. You know what it is. You are done. There is but one way out for you. You better take it before your filthy, abnormal fraudulent self is bared to the nation.” Via Letters of Note:

In November of 1964, fearful of his connection to the Communist Party through Stanley Levison, the FBI anonymously sent Martin Luther King a threatening letter, along with a cassette that contained the fruits of a 9 month surveillance project — allegedly incriminating audio recordings of King with women in various hotel rooms.

[View the rest at Letters of Note]