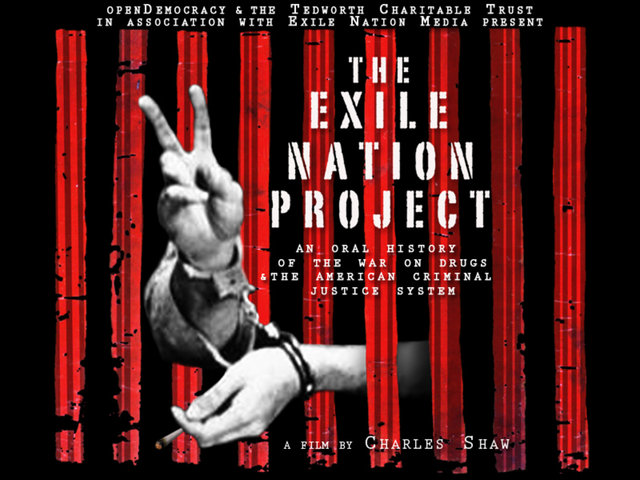 A film by Charles Shaw

The Land of the Free punishes or imprisons more of its citizens than any other nation. This collection of testimonials from criminal offenders, family members, and experts on America’s criminal justice system puts a human face on the millions of Americans subjugated by the US Government’s 40 year, one trillion dollar social catastrophe: The War on Drugs; a failed policy underscored by fear, politics, racial prejudice and intolerance in a public atmosphere of “out of sight, out of mind.”

The United States has only 5% of the world’s population, yet a full 25% of the world’s prisoners. At 2.5 million, the US has more prisoners than even China does with five times the population of the United States. 8 million Americans (1 in every 31) languish under some form of state monitoring known as “correctional supervision.” On top of that, the security and livelihood of over 13 million more has been forever altered by a felony conviction.

The American use of punishment is so pervasive, and so disproportionate, that even the conservative magazine The Economist declared in 2010, “never in the civilized world have so many been locked up for so little.”

The project will unfold over a two year period, beginning with the release of this feature-length documentary and then continuing on with the release of short films and complete interviews from each of the 100 participants in the project, meant to represent the 1 in 100 Americans that are currently sitting behind bars.

The Exile Nation Project is made possible by a generous grant from the Tedworth Charitable Trust and the openDemocracy group, in association with Exile Nation Media. All content produced is non-commercial and available for free distribution under a Creative Commons license.

BONUS FEATURE: “Friday the 13th” a poem by John Sinclair, follows the credits.

Charles Shaw is an award-winning journalist, author of the critically-acclaimed memoir, Exile Nation: Drugs, Prisons, Politics & Spirituality, and Director of the documentary film, The Exile Nation Project: An Oral History of the War on Drugs & The American Criminal Justice System.

Charles serves as Editor for the openDemocracy Drug Policy Forum and the Dictionary of Ethical Politics, both collaborative projects of Resurgence, openDemocracy, and the Tedworth Charitable Trust.

Charles’ work has appeared in Alternet, Alternative Press Review, Conscious Choice, Common Ground, Grist, Guardian UK, Huffington Post, In These Times, Newtopia, The New York Times, openDemocracy, Planetizen, Punk Planet, Reality Sandwich, San Diego Uptown News, Scoop, Shift, Truthout, The Witness, YES!, and Znet. He was a Contributing Author to the 2008 Shift Report from the Institute for Noetic Sciences, and in Planetizen’s Contemporary Debates in Urban Planning (2007, Island Press). In 2009 he was recognized by the San Diego Press Club for excellence in journalism.

In this article:Society, The Exile Nation Project, US