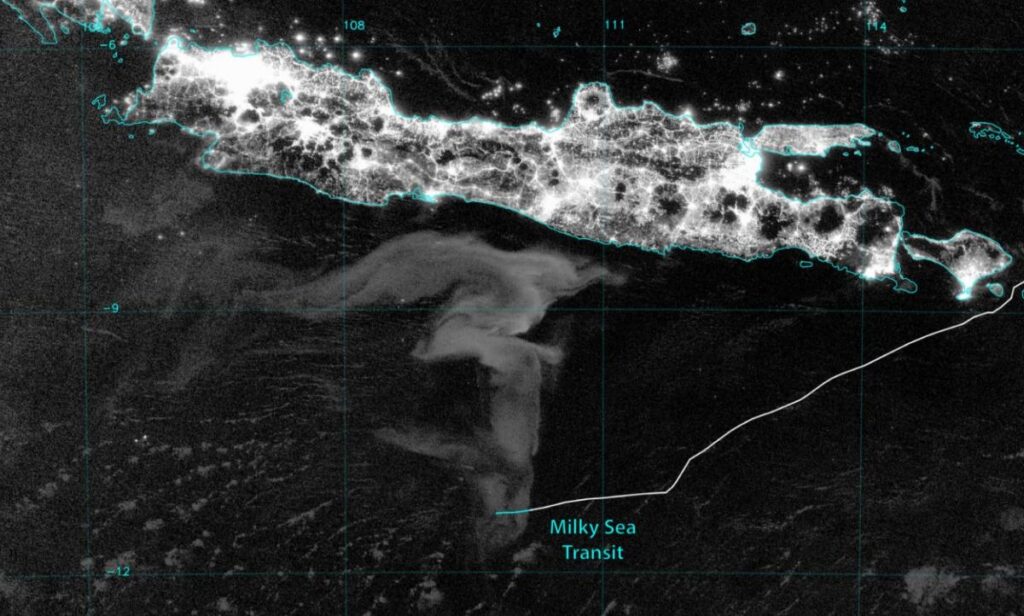 A rare and exciting oceanic bioluminescent phenomenon called “milky seas” was discovered by scientists at Colorado State University using a high-sensitivity space-based low-light sensor for the first time, according to a study published last year, in July 29 in the journal Scientific Reports. Now, The mysterious water glow was captured from the board of a private yacht.

Milky seas are an elusive and rare manifestation of bioluminescence in the ocean. Unlike the turbulent foam created by ship wakes, milky seas create a long-lasting, widespread and uniform glow on the ocean surface that can last for several nights and covers more than 100,000 square kilometers.

Sailors encounter these unusual conditions only in some remote areas of the world – mainly in the northwest Indian Ocean off the Horn of Africa and in the waters surrounding Indonesia. Predicting when, where and why milky seas form is still a mystery of modern science.

Surrealistic descriptions of the legendary “milk sea,” which eyewitnesses say glows as brightly as a field of snow or a layer of clouds, have been common among sailors throughout history, said CIRA director Steve Miller. These stories found their way into nautical adventure novels such as Moby Dick and Twenty Thousand Leagues Under the Sea, taking their place not so much in scientific observation as in fiction.

One of the most famous witnesses of the “milky” glow was the English naturalist and traveler Charles Darwin. He described this phenomenon, sailing with the team off the coast of South America.

Of more than 200 recorded sightings, only once, in 1985, did a research vessel sail through the Sea of ​​Milk. A water sample collected at the time showed that a strain of glowing bacteria that had colonized algal blooms on the surface of the water had created the glow. However, some features of the Milky Sea cannot be adequately explained by this hypothesis – especially in the face of eyewitness accounts.

Backed by new observations from space, researchers had the opportunity to learn much more about the circumstances of this amazing phenomenon.

At the CSU Collaborative Institute for Atmospheric Research (CIRA), scientists carefully analyzed day/night observations from three locations where milky seas are frequently recorded. They found 12 cases of this elusive phenomenon between 2012 and 2021.

Catching the light from the milky sea requires patience and the right conditions. Even faint moonlight reflecting off the surface of the ocean can mask the signal. Light emitted from the luminous upper atmosphere, directed straight up and reflected by clouds, can also ruin observations.

The researchers carefully analyzed the signals in the satellite data to rule out other sources of light emission and used sophisticated methods to find stable bioluminescent structures that emit light beyond background noise.

These glowing patches of water, which appear as steady glowing patches in the ocean at night, move with ocean currents. These spots disappear from view during the day due to the overwhelming amount of sunlight compared to the faint glow of the ocean.

Comparison of satellite observations with measurements of sea surface temperature, marine biomass and analyzed currents on the sea surface led the authors to put forward new hypotheses about the unique conditions surrounding the formation of the milky sea.

“Milky seas are just a wonderful expression of our biosphere, the significance of which in nature we have not yet understood ,” said Miller. “ Their very existence creates an incredible and compelling story that links the surface to the sky, the microscopic to global scales, and human experience and technology through the ages; from the merchant ships of the 18th century to the spaceships of modern times”.

Amateur photo of the phenomenon

It turned out that on August 2, 2019, the “milk sea” was observed by the crew of the private sailing yacht ‘Ganesha’, which was sailing around the world. One of the participants in the trip, Naomi McKinnon, got in touch with Miller and showed the scientists photographs taken by the yachtsmen. The crew of the yacht for the first time managed to capture the “milky sea” on a smartphone and a GoPro camera.

Miller published an article in the scientific journal Proceedings of the National Academy of Sciences summarizing the observations of the Ganesha crew. It turned out that the glow occurs at a depth of about 10 m. Previously, scientists believed that the bacteria that form the “milky sea” create a thin film on the surface of the water.

The bow breaker stopped glowing in front of the yacht, but the wake still glowed. When the crew of the Ganesha scooped up the glowing water with a bucket and stirred it, the glow stopped. Most luminous organisms glow more intensely when disturbed, Miller recalls.

The incident with the crew of the Ganesha confirmed for the first time that the “milk sea” could indeed be reliably detected with the help of satellite observation. This will allow in the future to better study and understand the mysterious marine phenomenon, says Miller.

Advertisement. Scroll to continue reading.
In this article:biomass, sea glow