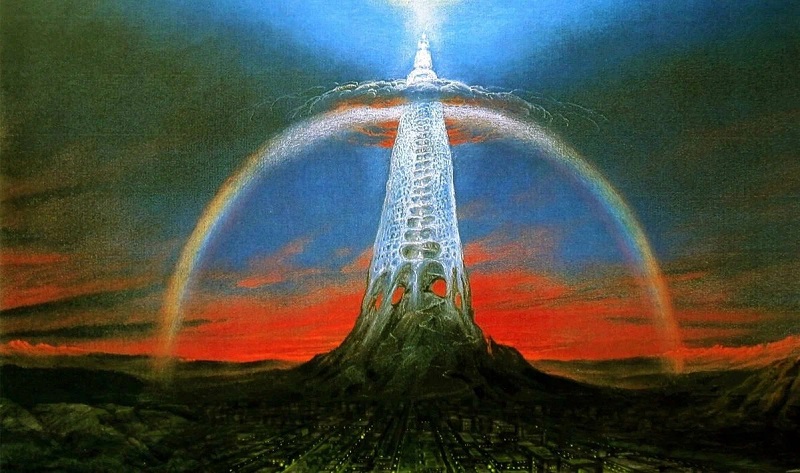 The mystery of life and death is one of the most complex and exciting for modern society. Until now, no scientist can confidently say whether a person has a soul and what adventures we can expect after death. But let’s look at the situation from the standpoint of alternative versions of history.

If we accept the fact that the true old gods, ancient egregors or spirits may not be some mythical creatures, but just another intelligent species with a more developed level of consciousness than humanity in the old days, then the illustrations from the Prometheus movie can be called the most ideal visualization option possible.

According to alternative versions of history, this species helped humanity to artificially raise the level of consciousness to a certain level, perhaps in “its own image and likeness.” There is often a misconception that the ancient egregors created man, but as we understand from research on this particular topic of real history, they only helped humans to develop.

As a species, we appeared much earlier, but our level of consciousness fully corresponded to other forms of living organisms on Earth. After that, representatives of a mysterious civilization appeared and, through genetic engineering, finalized our species to such a state that we violated the entire balance of the planet with our mere existence. If there were no highly developed civilizations on Earth long before us, then we upset the balance that had been maintained before for a couple of billion years.

When the first people with a developed consciousness appeared, it was natural that the alien race was some form of gods for them. There is a vague suspicion that that civilization can be considered gods in our time. But let’s digress from the topic, let’s get back to the issues of life and death.

Those who have surpassed even death

In some myths about the ancient gods or egregors, there are references to how the gods die and are resurrected. A good example is the myth of Osiris, who was generally collected piece by piece. It would seem, but these are just myths, why take them in such a literal sense? Since we are talking about the reality of the gods, then the situations in myths may turn out to be not mere inventions, but information based on real events.

Moreover, the Scriptures of one of the most popular religions describe the direct resurrection of Jesus in the flesh. There is no presumption in talk about the secrets of Christianity, but can assume that the civilization of the egregors is still watching over us, and sent a representative here 2000 years ago to guide people on the true path and give commandments for life.

But notice, first Osiris, then Jesus, then you can find controversial references in myths about descents into the underworld or heavenly kingdoms of individual gods, which also implies death and birth.

Based on these data, we can make a bold assumption that the civilization of the ancient egregors has reached such an unthinkable level of development, which allowed them to return the souls of dead colleagues and relatives.

Perhaps not every representative of an unknown civilization can do this, but the very fact of such a possibility is amazing. And that’s not all!

In addition to resurrection, we would like to single out the achievement of longevity.
Not only in the Bible, but also in the Sumerian myths, we see that even earlier people could afford to live not for a maximum of 100 years, but for a whole thousand.

So how long could representatives of the civilization of the gods live then?
If we assume that they have achieved biological immortality, and given the possibility of resurrection, the potential of their race is limitless.

There is an interesting point – even in myths, the resurrection process was not simple and was used extremely rarely and only in extreme cases, which by the way, is suspicious for myths!

If this is fiction, then why couldn’t God always be resurrected? After all, you can come up with anything, but here there are some incomprehensible difficulties, which it’s strange.

Perhaps that resurrection, although it was possible for the egregors, but even they had to pay a high price for it. It’s frightening to imagine that if this price is terrible for them, then for us it will probably be unattainable.

You can also resurrect in different ways. For example, if you adhere to the theory of a multivariant universe, then there is always a world where you are alive, but otherwise there is exactly the same as here, we go there, grab it and drag it here, voila, you are resurrected.

With the metamorphoses taking place with the higher races, one must also take into account the multidimensionality of time. Space and time have three dimensions. This is a fact that will soon be officially recognized.

In any case, if we ever find out that the resurrection is real, then this will radically change our civilization and the very idea of life, because it can receive a certain price category.

Advertisement. Scroll to continue reading.
In this article:immortality, Old Gods