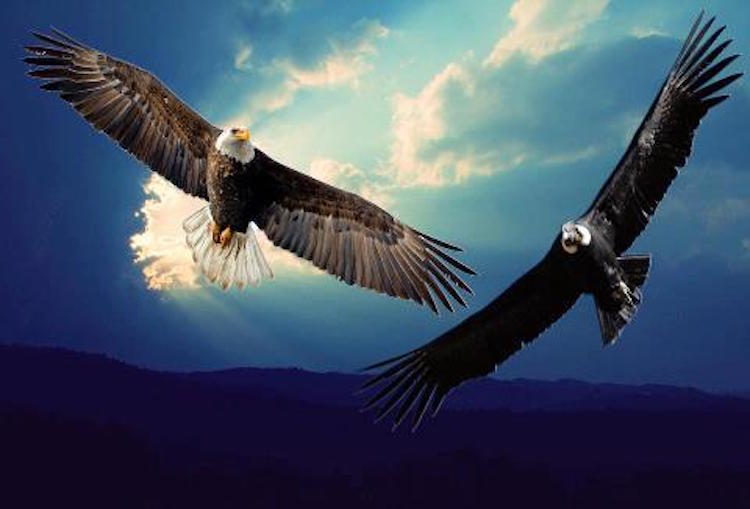 The Prophecy of the Eagle and the Condor is a story about the unification of the indigenous peoples of North America with those of South America. The Eagle of the north is said to represent masculine energy, as well as the energy of technological advancement and the focus of the mind. While the Condor of the south represents feminine energies and our connection to the earth and our own nature, along with the softness of the heart.

Of Incan origin, the prophecy has been told in many cultures, and points to the present day when after a long period of separation and dominance by the masculine, the two will again unite, bringing balance and harmony to our aching world.

The unification would heal old wounds and temper the destructive and dominating characteristics of modern society precisely at a time when all seems lost.

In the following video, indigenous leaders and elders from both continents speak about the meaning of this prophecy and what it holds for our future.

“For us, us indigenous, there is no coincidence for us. Everything has a purpose. Bringing together people, uniting hearts, uniting the love, embracing the love of humanity, of our sacred mother earth, the universe, the light that shines on us everyday. What we call in our language the time of Pachacuti, the time of transformation.” [Source]

Indeed it is a time of transformation, and we can see how the cultures of North and South America are coming together in order to transform, largely to share sacred plant medicines and to work together to create alliances to conserve and protect mother earth, and to resist the domination of the corporate state.

The hour is late, however, and in the back pages of the news a pair of recent stories offer a warning that this prophecy is in danger of being plowed under by the unchecked powers of the corporatocracy.

In Argentina, activists recently issued a call for help to save the condor, which is at present being wiped out by the poisons introduced into the environment by the agrochemical industry.

Recently, thirty-four condors in Mendoza, Argentina were found dead, the result of chemical poisoning. Fundación Bioandina Argentina warns that this happening in many parts of the country.

Argentina is being poisoned on a massive scale by the carless overuse of Monsanto’s deadly herbicide glyphosate. The poisoning is affecting the health of people, causing shocking deformations and crippling illnesses, yet the industry presses onward, continuing to market and sell these chemicals as a safe way to boost agricultural production.

At the same time, conservationists in North America are asking for help to save the American bald eagle, who is at present suffering a similar fate. Eagles are being brought into rescue centers, some barely able to lift their heads, as their environment has become so toxic, poisoned by lead, DDT, and modern agrochemicals.

The heart-breaking significance of these die-offs is felt in the context of the Prophecy of the Eagle and the Condor. Our chances at reunification and global transformation are being killed off by the forces of greed and domination. This prophecy of hope is being stolen from us.

Support the movement to save South American condors by signing this petition. And support efforts to help the bald eagle by supporting The Indigenous American.

This article (The Dying Prophecy of the Eagle and the Condor) was originally created and published by Waking Times and is published here under a Creative Commons license with attribution to DylanCharles and WakingTimes.com. It may be re-posted freely with proper attribution, author bio, and this copyright statement.

Advertisement. Scroll to continue reading.
In this article:the time of Pachacuti