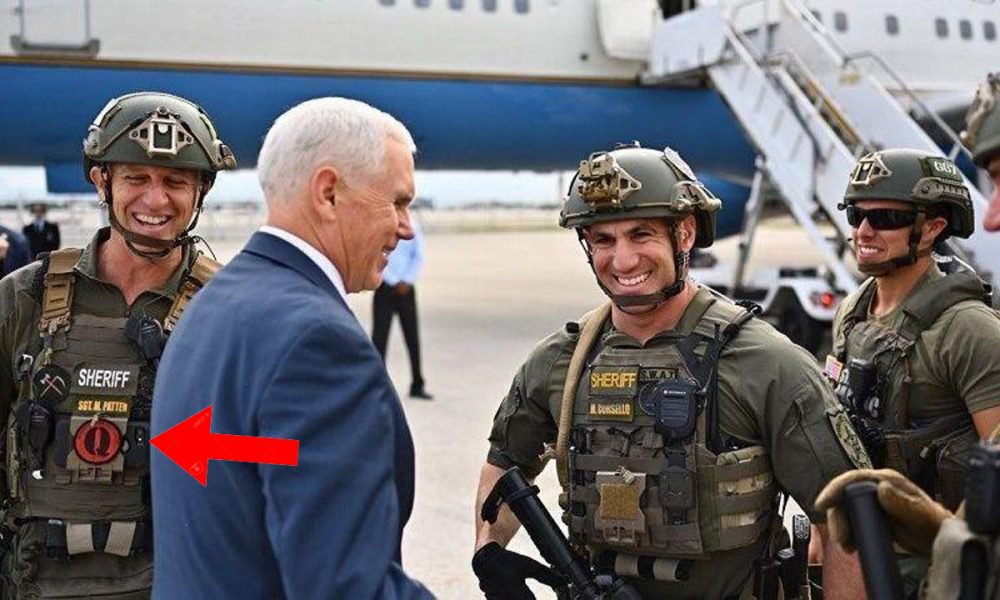 You probably recall the images that went viral of a SWAT team leader who wore a uniform police-clashing patch with the letter Q on it when meeting Vice President Pence. On the patch, it read, ‘Question The Narrative,’ a piece of advice we can all take in such controversial and fake news ridden times.

The mainstream media has been under severe fire from Trump ever since he came into office. He has pointed out the often true reality that the mainstream media pushes false narratives to manipulate the public to support certain political agendas. This isn’t to say Trump is not guilty of this himself, he certainly is, but it appears Trump has a larger task in mind which we’ve covered in detail over the last two years, and it relates to Q.

If you haven’t kept up with it, you can gather a great rundown on the situation here.

Sgt. Matt Patten, who was photographed greeting VP Pence at Fort Lauderdale-Hollywood International Airport on Friday, will be removed from its Office of Homeland Security as well as the agency’s SWAT team, and reassigned to the Department of Law Enforcement. In other words, he was demoted.

Pence and others had tweeted the image regardless of the Q patch, causing somewhat of an uproar as the public saw it. It was deleted after many noticed the patch in the photo. Was this a purposeful Tweet? Or did they truly not realize the patch? We don’t know, but you can imagine Q supporters were in full support.

“Being a highly political entity with a narrow one sided scope of positioning, public alignment and representation of such a group is in contrast with the core values of political neutrality within the Broward Sheriff’s Office,” the report said. “Sergeant Patten’s actions of displaying unity with controversial group is not in alignment with the core values of law enforcement and the Broward Sheriff’s Office, [and] discredited the agency, the county, and himself.” (source)

The patch in question appears to be available for sale on Amazon which may be where Patten obtained it.

What’s interesting about this event is the desire for even those within law enforcement to question and understand the truth. Regardless of obvious conditioning and mainstream media coverage which has essentially ousted Q as a ‘conspiracy cult,’ people continue to follow and explore in the millions. And it’s probably because it inspires people and makes more sense than the mainstream media itself.

Similar to what we’re seeing in France where government workers like police and firefighters are turning their backs on elected officials, it may not be long before those put in place to protect the government in the US also turn away as they realize the deep state is who they are protecting.

People are uniting. It’s inspiring. We must remember that these changes we are all seeking ‘out there’ begin inside. We change our perspective, we question reality, we pull our emotions and reliance out of the system and we begin to see that without us choosing to play their game, they don’t have anyone to play with and their game falls apart.

In this article:Q patch, Question The Narrative