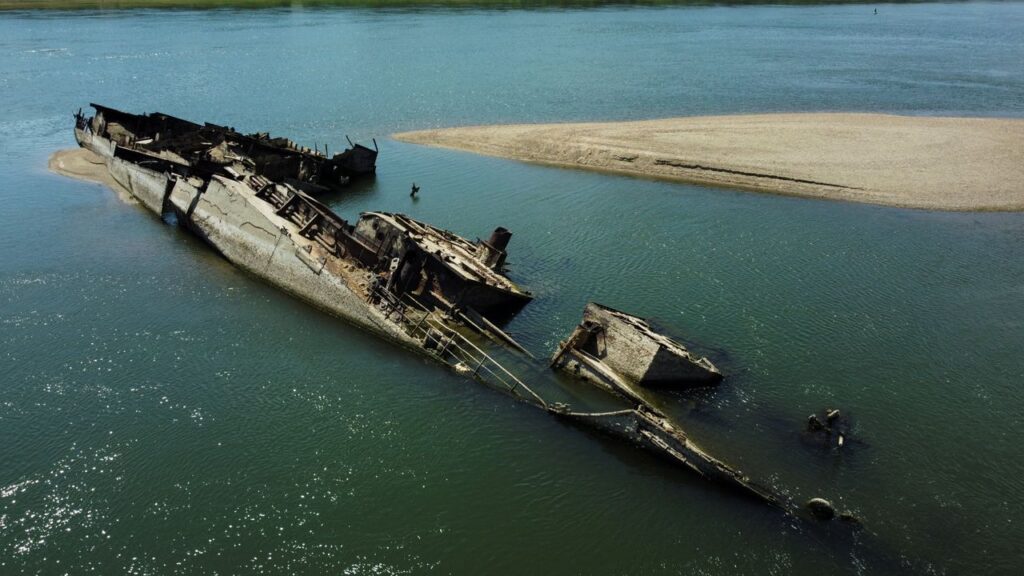 The worst drought in recent years to hit Europe has dropped the level of the Danube River so much that you consider it to be the biggest drop recorded in a century.

This resulted in the remains of dozens of German warships sunk during the Second World War emerging from the waters near the city of Prahovo.

The ships, packed with explosives, were among hundreds sunk in the Danube in 1944 as the German Black Sea Fleet retreated in the face of advancing Soviet forces. To this day, shipwrecks still impede navigation on the river when the water level drops.

This year’s drought, which scientists say is a consequence of global warming, has brought back to light more than 20 skeletons of these ships in a stretch of the Danube in eastern Serbia. Some of these ships contain tons of ammunition and explosives and are considered a danger to navigation.

“The German flotilla left behind an ecological disaster that threatens us, the residents of Prahovo,” commented 74-year-old Velimir Trailovic, a retired resident of the town who has written a book about the ships.

Workers in the local fishing industry are also at risk.

The months-long drought and high temperatures are causing river levels to drop in other parts of Europe as well, such as in Germany, Italy and France. In Serbia, authorities resorted to dredging to keep navigation lanes open on the Danube. In the area of ​​Prahovo, due to sunken warships, the navigable section of the Danube has been reduced to 100 meters, from 180 before.

Jialing River has disappeared in China

The summer of 2022 has not yet ended, but the drying up phenomenon of the largest rivers in Europe and America has also reached Asia, where terrible things are happening to the Jialing River.

Jialing is not just some Chinese river, but one of the main tributaries of the Yangtze – the largest river in Asia and the third largest in the world.

In some places there is no water at all and people walk along the riverbed as on dry land:

The brave Chinese jet skiers have switched to ordinary bikes and ride as if nothing had happened:

China is now in the flood and rainy season. In 2020, in August, the whole world watched the Three Gorges Dam, where the water began to overflow. Jialing at this time of the year looked like this:

And now there is no water at all, which is clearly abnormal.

The Chinese will, of course, be the first to face the problem, as now it is time for them to fill the reservoirs, which will be emptied in the winter to generate electricity, and in the spring for irrigation. But now there will be neither electricity nor irrigation of crops.

Ultimately, this will lead to the fact that 200 million Chinese will come to the Middle East and drink the Euphrates – that’s exactly what the prophecies say.

But also, according to the same prophecies, the disappearance of fresh water will be worldwide and, as it is now on the Danube, Rhine, on Tijuana and on Jialing, it will be everywhere.

Advertisement. Scroll to continue reading.
In this article:China, Serbia