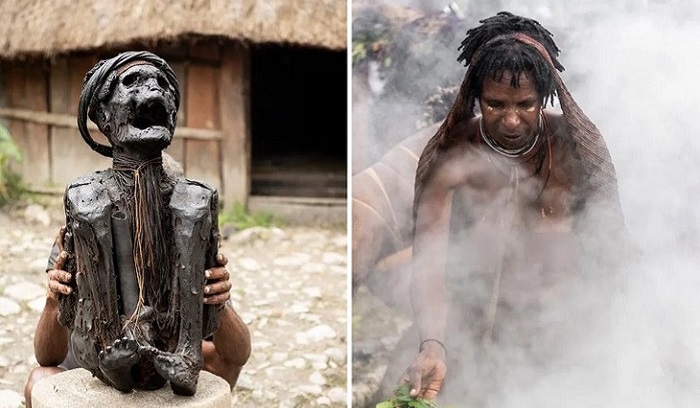 A few decades ago, Dani actively practiced ritual cannibalism. It is now reported that this tradition has been discontinued.

In their recent macabre history, there is no less a frightening tradition of smoked dried carcasses of their dead relatives over a fire. And also cutting off the phalanges of women’s fingers.

The phalanges were cut with a stone axe. This procedure is performed for those women who have lost a male relative: husband, son, brother or nephew, to emphasise the pain of loss and to appease the dead’s spirit.

The surgery was primitive and rough, but the wounds on the hands of the women healed well and fairly quickly.

Chiodini wandered in the jungle for days trying to find the tribe and finally he was lucky.

“The natives greeted me warmly and did not even try to eat me.”

Gianluca was shocked to see the 250-year-old corpses of the dead, Dani’s “eternal” ancestors, completely black from smoking for a long time.

The guide told the Italian that seven smoked mummies are stored in the village, but only two of them are allowed to be shown to strangers. The rest are taboos, and if the photographer tries to find them himself and photographs them, the natives could kill him.

To prevent mummies from decomposing, they are removed daily and carefully smeared with ointment of herbs and lard. Then they are hung over the fire so that the smoke can penetrate well into the body. All this has been happening daily for 250 years.

Dani people stopped eating their relatives only after 1990, at least officially. Now the meat they eat is mostly pork.

The natives hunt wild pigs with bows and arrows. After being captured and killed, the pigs are wrapped in palm leaves and allowed to be smoked by fire, like the mummies of their ancestors.

When the meat is hot, it is considered ready. Men are the first to eat, and women and children eat what is left behind.

Many women in the tribe have their fingers cut off, meaning they have lost many male relatives.

Whether these deaths were in battle with neighboring tribes or through illness, history is silent …

Now, finger-cutting is also considered a forbidden procedure and in young women the fingers are already intact but you can still see the amputated hands of the older women.

In this article:cannibal tribes, Papua