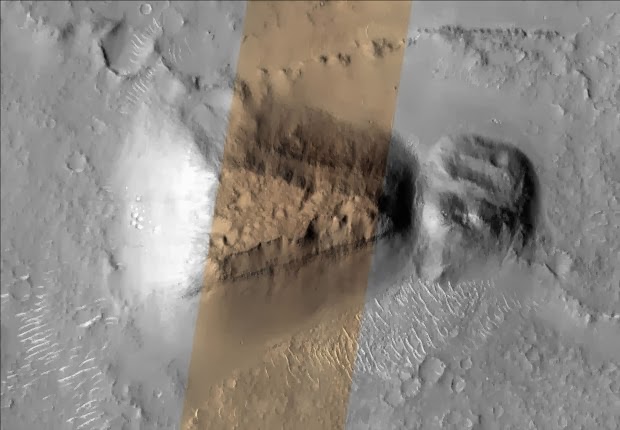 “Virtual archaeologists” believe that there is a “massive temple” on Mars that looks like an ancient Japanese tomb. According to them, this is confirmed by satellite images from the Red Planet.

Researchers are confident that there is a definite connection between the mysterious structure on the surface of Mars and the Japanese temple on Earth. The structure seen in satellite images of the Red Planet shows a striking resemblance to the ancient Japanese tomb of Kofun.

In November 2016, after a three-year study of a mysterious formation found on the surface of Mars and codenamed “Keyhole”, an independent research group led by Cydonia Institute, director George Haas published their interesting, but very strange results. The team determined that the formation has such perfect symmetry that it is highly unlikely that this is the result of natural erosion. A large number of satellite images of the mysterious structure suggest that this is not a pareidolic illusion at all. This structure bears a striking resemblance to the Kofun burial complex in Japan. Nature could not make such regular geometric shapes on the “red planet” itself, for this, there must be technology and intelligence.

This Martian structure is documented in four separate images provided by NASA and the European Space Agency, which confirm Keyhole symmetry and a unique set of geometric measurements. The authors argue that the available NASA imagery dataset confirms the presence of multiple points of geometric consistency in the structure and suggests a high likelihood of artificiality.

“It looks like what we see on Mars is evidence of some unknown extraterrestrial culture that I think could tell us a story about where we came from and possibly where we are going,” Haas said.

This leads researchers to speculate that perhaps millions of years ago, an ancient civilization actually inhabited Mars.

There are various intriguing theories suggesting that in the distant past, a catastrophic event unknown to us (nuclear war?) destroyed the Martian civilization, forcing its surviving representatives to go to Earth and restore civilization.

To see the similarities between the putative object on Mars, the researchers suggest using the Google Earth service, in which the following coordinates must be entered: 36 ° 7’45.64 ″ N 139 ° 28’52.95 ″ E. This data will lead directly to the Japanese tomb.

Regarding the statement by virtual archaeologists, NASA explained that the straight edges of the structure are the result of cracks or a natural hill forming hard soil that has been eroded over billions of years.

Many researchers disagree with NASA scientists and believe that the structure revealed on Mars, although it has survived millions of years of erosion, but its clear contours indicate that the ancient race most likely inhabited Mars.

Although there are many structures on Mars that could easily be mistaken for natural formations, these two structures exhibit near-perfect symmetry.

“When we look at examples of the keyhole shape that is found in various myths and traditions, it tells us that it is a vital shape, the meaning of which we need to understand. And this suggests that when we find something in the shape of a keyhole, no matter where it is, it indicates belonging to a great secret. The symbol of which is the keyhole. Perhaps the understanding and study of these objects will help us to reveal many secrets of the universe and cosmic forces. ” William Henry said, an investigating mythologist.

According to scientist John Brandenburg, who has a doctorate in theoretical plasma physics from the University of California, the ancient Martian civilization existed on the Red Planet and was destroyed in the distant past.

The similarities can’t go unnoticed, and we’re looking at the remains of a once mighty Martian civilization that most likely disappeared millions of years ago after a catastrophic nuclear war, Dr. Brandenburg said.

Back in 2019, Taiwanese ufologist Scott Waring discovered an object on the Red Planet that is very similar to the tombs of the Egyptian pharaohs.

So, from this discovery was born the assumption that the Martians in the form of deities descended to the earth in the name of the enlightenment of mankind. This theory has been around for many years and arose from research that suggests that Egypt at that time was perhaps the most suitable for the life of the Martians.

So it was assumed that the alien beings therefore chose the country as their place of deployment. Also, ufologists have repeatedly recalled the figure of the Martian, which bore a resemblance to the earthly Amazon.