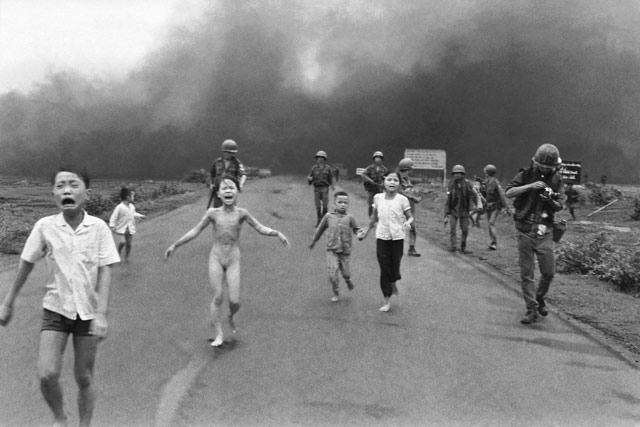 During the Vietnam War this photo was circulated across America in various magazines, newspapers, and war correspondence. It is a picture of pain and anguish that so many of the Vietnamese people went through, during what was called the Vietnam Conflict. It is not my intent to post the numbers of people that were maimed, missing, or killed on both sides of this terrible tragedy, or to expand on how fraudulent war is to feed the machine.

My hitch in the Vietnam Era was all about blowing things up; people, boats, aircraft, homes, villages, oxen, and anything else that got in the way. I was trained for eight months on how to use explosive weaponry to destroy and kill, and was a graduate of Naval Aviation Ordnance School. The hot rod kid from a small Texas town had been transformed from a simple fun lovin’ guy to an agent of death. At the time I was too young and impressionable to know any different.

My one year’s active duty involved working with other men to prepare, arm and make ready, “our birds”, F4J Phantoms, the latest and greatest of the flying death dealers. Our squadron operated on an aircraft carrier, along with other squadrons, and moved up and down the Gulf of Tonkin. Launch and recover, rearm, launch and recover….the cycle of death. We drew pictures and wrote nasty words on our bombs and missiles addressed to “Charlie”, slang for Viet Cong, (NVA) North Vietnam Army, or any other high yellow skinned communists.

When flying off the carrier to go home, I was sent to Da Nang, Vietnam for processing which included psychological evaluation. As our plane approached the coast of Vietnam, I could not believe what my eyes were seeing through that window. It was a total “moonscape”, no trees , no nothing, only endless bomb craters. As we flew low and slow closer to the base, I could see makeshift tents covering some of the larger craters, with Vietnamese people looking up at us. I had never seen a Vietnamese person before. They looked totally helpless in this region of hell that once was their homeland. I was numb.

Today, many Vietnam War Veterans actively honor the GBNF (gone but not forgotten), the MIA’s (missing in action) and some crusade for the Vietnam government to find and recover any and all POW’s, (prisoners of war). It is an honorable thing to visit the Vietnam Veterans Wall. There is an annual motorcycle ride to D.C. every year called “Rolling Thunder” to honor the dead. I will always remain as one of this brotherhood. But something was missing, something lost inside me, a kind of soiled sadness.

In the town I live in today, there was a curio/tobacco shop operated by a Vietnamese mother and daughter. I would purchase my weekly pack of weapons of mass destruction cigarettes and occasional gifts for friends and family. The daughter could speak English fairly well and we would chit-chat about this and that. The mother would usually just glance up and smile, crocheting, and listening to a CD recorded in the Vietnamese language.

One day, I asked the daughter if she ever visited her native country and she told me, “Only twice… to visit cousins”. The shop had no other customers, then from somewhere…something welled up inside me and our exchange happened:

“Did your mother live in Vietnam during the war”?

“Which one”?  the daughter asked.

“Ugh..ugh… the American occupation” I stammered.

“Yes” she named the province.

“I would like to apologize to her” I explained, as I’m gazing at her confused look.

“ I would like to ask her forgiveness, and yours too”. The daughter says something and her mother comes to the counter next to her daughter.

“I fought in the Vietnam war, and I know that I was part of killing and hurting many of the Vietnamese people…they may have been some of your family….I hope that you will forgive me”.

“Do not be afraid of things gone away…I am afraid that it will happen again”.

Mother says something to daughter, she goes to the fridge and brings a bottle of cold apple cider and hands it to me. Mother speaks and daughter translates:

“Thank you and have a good life”. They were smiling and nodding as I made my exit.

I avoided their shop for months after that. Maybe it was a guilty feeling, having revealed to them what I had done in my past. Maybe it was because I didn’t want anything to happen that would spoil my shallow feeling of redemption. I drove to their shop not long ago and found they had sold out and moved away.

I wanted to buy an apple cider and ask them their names. I wanted to know if I would feel clean again when I saw their faces.

In this article:Consciousness, human interest, World at War