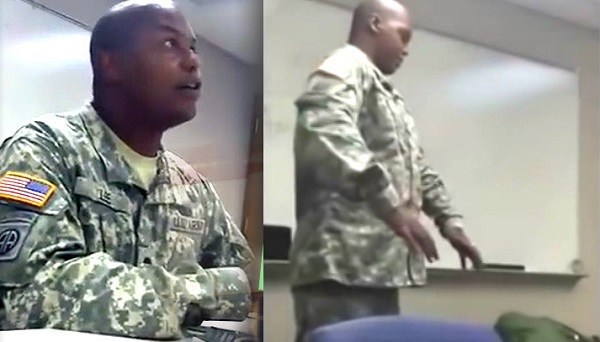 On the board behind him, he tries to sketch the described, but the video does not clearly see what he painted. Judging by the grins on the faces of the soldiers, they do not particularly believe his story, but the kidnapped man tells in detail and seriously and seems to believe what he is saying.

According to the soldier, after he was kidnapped, he saw representatives of three races of aliens. The first were typical large and short “gray”, the second were “tall white”, and the third were reptiloids. On the board he tried to portray these creatures. Then he tells that he visited the gray planet and that there he breathed the usual air, as the atmospheres of their planet and Earth are very similar. But the gray planet is in a double star system and there are two suns (as in Star Wars on the planet Tatooine), so the climate is much drier. “The bones of the” gray “are also much more fragile than human bones.”

The most aggressive race of the three he saw, according to the soldier, is reptiloids. They are the real enemies of mankind. They are two-legged, taller than two meters tall and very muscular. According to the soldier, he was told that there was a big war between the gray and reptilians and that the gray had killed a lot of reptiles. After that, the reptiles decided to capture our planet and supposedly a huge asteroid that flies to Earth, it’s actually their ship. Then the soldier says that between the Earthmen and the Gray there has long been a secret cooperation program called “Majestic 12” and that 12 earthlings for the past 13 years have been sent to the gray planet. And that Steven Spielberg’s famous film “Secret Contacts of the Third Kind” was very close to the truth.

All American presidents, including Barack Obama, were allegedly well aware of the existence of aliens. When colleagues ask a soldier whether Jesus Christ was a stranger, he answers that he asked the same question in gray and they answered that he was a man.

However, he was also told that the DNA of all people, including Jesus, by the hands of the aliens was changed 68 times since prehistoric times. When the video appeared on other sites, it was found out that it was posted on the network a few years ago, but then very few people noticed it. However, despite the past years, there is still no known name of the soldier, nor the exact year of recording the video.