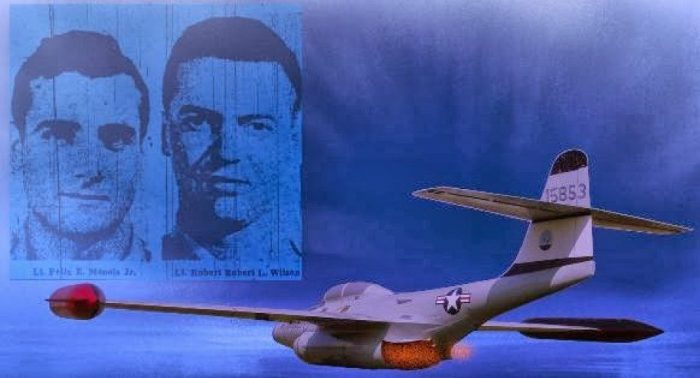 Just as frightening as the Mantell incident, though more bizarre and less publicized, was a fatal encounter that occurred on November 23, 1953, over Lake Superior. That evening, as Air Defense Command radar tracked an unidentified target moving at 500 miles per hour over the lake, an F-89C all-weather jet interceptor from Kinross AFB took off in hot pursuit. Radar operators watched the aircraft close in on the UFO, and then something fantastic happened: The two blips merged and then faded on the screen, and all communication with the interceptor ceased. An extensive land and water search found not a trace of the craft nor the two men aboard it: pilot Lt. Felix Moncla, Jr., and radar observer Lt. R. R. Wilson.

Unlike the Mantell incident, the Kinross case attracted minimal newspaper coverage; also unlike Mantell, Kinross has never been satisfactorily explained. Later, after aviation writer Donald E. Keyhoe broke the story in his best-selling The Flying Saucer Conspiracy (1955), the Air Force insisted that the “UFO” had proved on investigation to be a Royal Canadian Air Force C-47. The F-89C had not actually collided with the Canadian transport plane, but something unspecified had happened, and the interceptor crashed. Aside from implying woeful incompetence on the radar operators’ part, this “explanation” — still the official one — flies in the face of the Canadian government’s repeated denials that any such incident involving one of its aircraft ever took place.

In 1958 Keyhoe got hold of a leaked Air Force document that made it clear that officialdom considered the Kinross incident a UFO encounter of the strangest kind. The document quoted these words from a radar observer who had been there: “It seems incredible, but the blip apparently just swallowed our F-89.” The following year, in conversations with civilian ufologists Tom Comella and Edgar Smith, M. Sgt. O. D. Hill of Project Blue Book confided that such incidents — he claimed Kinross had not been the only one — had officials worried. Many, he said, believed UFOs to be of extraterrestrial origin and wanted to prevent an interplanetary Pearl Harbor. Cornelia subsequently confronted Hill’s superior, Capt. George T. Gregory, at Blue Book headquarters. Gregory looked shocked, left the room for a short period, and returned to state, “Well, we just cannot talk about those cases.”

In this article:Project Blue Book