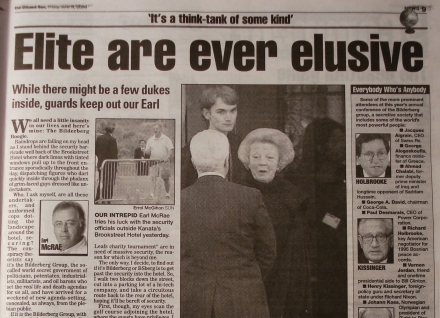 Of all the New World Order conspiracy theories, this one sounds the most plausible. They are a real organization that meets once or, at most, twice a year, renting out entire floors of remote and expensive hotels. No one knows who the members are, except other members, of which there may be 20, or several hundred. They are thought to be powerful financiers, businessmen, politicians, and generals, whose sole intent is to control the world’s economies, wars, politics, anything that helps them make money. Henry Kissinger is known to have been a member at one time. Tony Blair is rumored to be one. Both Bushes are rumored to be members, as is Vladimir Putin.
The original conference was held at the Hotel de Bilderberg, near Arnhem in the Netherlands, from 29 to 31 May 1954. It was initiated by several people, including Polish politicians Józef Retinger and Andrew Nielsen, concerned about the growth of anti-Americanism in Western Europe, who proposed an international conference at which leaders from European countries and the United States would be brought together with the aim of promoting Atlanticism – better understanding between the cultures of the United States and Western Europe to foster cooperation on political, economic, and defense issues. Retinger approached Prince Bernhard of the Netherlands who agreed to promote the idea, together with former Belgian Prime Minister Paul Van Zeeland, and the head of Unilever at that time, Dutchman Paul Rijkens. Bernhard in turn contacted Walter Bedell Smith, then head of the CIA, who asked Eisenhower adviser Charles Douglas Jackson to deal with the suggestion. The guest list was to be drawn up by inviting two attendees from each nation, one of each to represent conservative and liberal points of view. Fifty delegates from 11 countries in Western Europe attended the first conference, along with 11 Americans.
The success of the meeting led the organizers to arrange an annual conference. A permanent Steering Committee was established, with Retinger appointed as permanent secretary. As well as organizing the conference, the steering committee also maintained a register of attendee names and contact details, with the aim of creating an informal network of individuals who could call upon one another in a private capacity.[citation needed] Conferences were held in France, Germany, and Denmark over the following three years. In 1957, the first US conference was held on St. Simons Island, Georgia, with $30,000 from the Ford Foundation. The foundation supplied further funding for the 1959 and 1963 conferences
Their bodyguards at these meetings are privately-hired mercenaries. The group was formed during the Cold War by Joseph Retinger, who was the CEO of the European Movement, a progressive organization designed with the aim of a single world government. The EM was funded by the CIA, and its contacts were a who’s who of global governmental and military powers. Retinger believed that the world could be at peace if peace could be brokered among a small group of the world’s elite, leaving the public out of the equation.The problem with Retinger’s idea is that the Bilderberg Group must have absolute power to pull this off, and if it has that much power, war can be brokered just as readily as peace. The theory claims that the Bilderberg Group marketed all the major wars of the last half a century, beginning with the Korean War, and including both Gulf Wars, and the War in Afghanistan.
The most convincing evidence against them is that they are known to have discussed, in 1955, the need for a tightly bound European Market. A year and a half later, the European Common Market was established by the Treaty of Rome.Whenever the phrase “single world government” crops up, conspiracy theorists whip out the Revelation. The Revelation describes the Antichrist as not taking over the world by force, but by charm, as a politician. The theory now purports that one of the Bilderberg Group’s members is in fact possessed by Satan, who is slowly but surely drawing his plans against us.

In this article:new world order