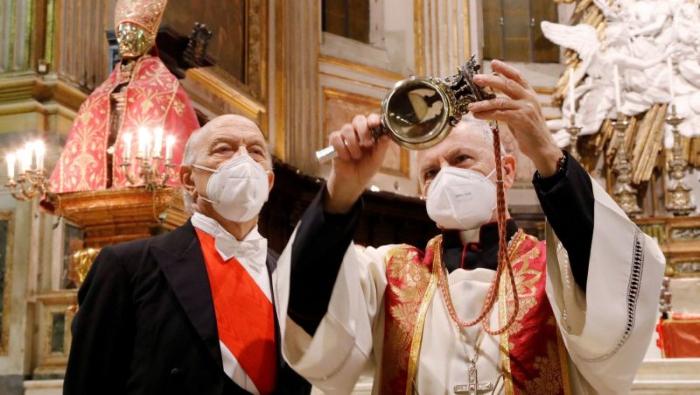 Every time the miracle of the blood thinning of Saint Januarius does not happen in Naples, some large-scale cataclysms occur in the world: wars, epidemics, earthquakes, droughts, etc. In 2016, the blood did not liquify and soon an earthquake struck Mexico.

In recent years, only the lazy has not read about the impending End of the World, he was seen in global warming, endless wars in the East, and in 2020, when the whole world was covered with coronavirus and the streets of the largest cities were empty, many of those who used to treat skepticism.

The recent event again gave rise to conspiracy theorists to write that the world is moving towards something very gloomy: The annual Miracle of St. Januarius has not happened in Italy. It is believed that this is indeed a very bad omen. In the 20th century, the miracle did not happen three times: in 1939 – before the outbreak of World War II, in 1944 – before the eruption of Vesuvius, in 1980 – before a strong earthquake. In the 21st century, the Miracle did not happen on the saint’s day in 2016, just before a powerful earthquake in Mexico.

In Naples, Italy, for several hundred years on December 16, Catholics have removed a tiny vial of the dried blood of St. Januarius from his protective chamber in the Royal Chapel of the Cathedral of Naples and put it on display for the crowd. The crowd gathered in the church anxiously awaits for the blood in the vial to miraculously turn to liquid. The blood remains in a liquid state for a short time (from several minutes), and then “dries up” again until the next important day. In fact, there are three such days every year, but December 16 is considered the most important and significant.

As mentioned above, if the blood in the vial does not dilute, then this is a sign of very big troubles for Italy or other countries. Legends say that over the past few centuries, blood has refused to liquefy on the eve of 11 bloody revolutions, three large-scale droughts, 22 mass epidemics, 4 wars, 19 devastating earthquakes, and 9 deaths of popes. December 16, 2020 Miracle suddenly did not happen. This is reported by the Catholic website catholicnewsagency.com.

“When we took out the reliquary from the safe, the blood was absolutely hard and remained absolutely hard. It does not show the slightest sign, not a drop. It’s okay, we will wait for a sign with faith,” Pastor Vincenzo de Gregorio said, rector of the Chapel of St. Januarius, in end of day December 16, 2020.

By the way, the Catholic Church does not recognize this blood thinning as a proven miracle (as well as the blood thinning of St. Patricia, St. John the Baptist, St. Pantaleon and 20 others), although Pope Francis allegedly witnessed this personally in 2015. However, the church body always supported the holiday.

Skeptics have repeatedly tried to debunk this Miracle as a hoax and brought up their theories about how exactly “blood thinning” occurs. However, there were also those who studied the Miracle and are sure that it is not a fake.