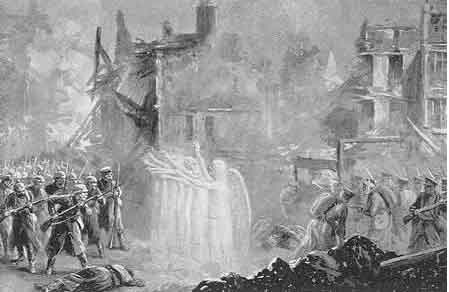 The Korean war was given the moniker “the forgotten war” because of the relatively small amount of attention it recieved from the public compared to the two world wars. As time has progressed, however, World War I seems to get increasingly less attention, and the Korean war more. As the veterans of WWI die, there are only a handful left now, that war is rapidly fading from living memory and becoming a conflict relegated to academia and an all too brief mention in school history books. In fact, WWI was a horrific conflict that took the lives of nearly nine million people and served to shape the subsequent history of the 20th century. WWI was also a war riddled with supernatural occurences more fitting accounts of a medieval war, than a modern one. Chief among these stories are the Angels of Mons.

The Battle of Mons was the first major action by the British Army in World War I. After the forced withdrawl of French and Belgian forces, the British were left exposed and while they fought valiantly, they too were forced to take a costly retreat in the face of overwhelming German forces. In the midst of this retreat a strange apparition of angels holding back the Germans was claimed to occur. Accounts filtered to the media in Britain of three angels appearing between the British and Germans, protecting the British in their retreat. The angels appeared as larger than men, with a center angel in bright light, with wings extended, seemingly protecting the two smaller angels in the face of the Germans. The British interpreted it as St. George, and the story was used in the recruitment of British soldiers.

But did it really happen? The seed for the story may have been planted by occult novelist Arthur Machen, who wrote a short story in the London Evening News about a month after the battle called “the Bowmen”. Machen himself said the story was fictional, and it wasn’t specifically about Mons. In fact, it wasn’t even about angels, the story relates that a soldier prayed to St. George, who brought back a spectral host of bowmen from the Battle of Agincourt who fought on the side of the British.  But a number of soldiers present at the battle swore that St. George himself had appeared at the battle and staved off the Germans. Its a fact that something did cause the Germans to waver, for a time they recoiled and withdrew which allowed the British to retreat, but was it St. George? The story of the Angels of Mons bears so little resemblance to Machen’s story that its hard to swallow that it was the seed that led to the legend.

Harold Begbie’s book “On the side of the angels”. contains his collection of accounts describes the three luminous angels, though unfortunately most of his accounts are anonymous in nature.  Other accounts exist claim that the number of angels was as many as five.

All accounts claim that the German cavalry stopped in their tracks as their horses would go no further, allowing the British retreat. Significantly, accounts from the German side are almost entirely lacking. This general lack of witnesses isn’t surprising in light that most of the people present at Mons did not survive the beginning of the war, which would grow into war of attrition mostly spent in trenches. In any case, the story became legendary in Britain throughout the war, and served to both boost morale and recruitment.

Did Angels save the British Army in August of 1914, or did a public desperate for good news latch onto a fictional story and mould it into a legend? We can’t be certain. But the fact remains that the Germans did waver in the face of something, whether it was fierce British firepower, or angels siding with the British Army, we will never know for sure.