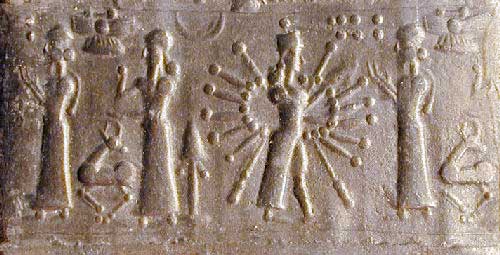 Some of the religious traditions, legends, and customs of the Native Americans were remarkably similar to those of  the Old World. But, according to the established view, this is only a coincidence because there was no contact between the two regions before Columbus made his historic Atlantic crossing 500 years ago. It’s known, though, that the Vikings reached North America before him and  Gavin Menzies’ fascinating book, ‘1431’, provides evidence to suggest that a Chinese fleet also, previously, visited this region.

Various animals were, symbolically, associated with the star-gods, and a few of them even became objects of worship themselves. Some of the sacred animals were sacrificed to the gods in both the Old and New Worlds. It was the serpent, however, more than any other living creature, that the Ancients associated with the extra-terrestrial civilisers of man and it was universally revered for thousands of years even in countries where there were no snakes. People celebrated with serpent dances and various folk even kept live snakes in their homes. When Pizarro arrived in Peru, the Incas mistakenly thought that the white god, and his companions, had returned  and so their ruler, Atahualpa, arranged to meet the Spaniard at Cassamarca in the Temple of the Serpent where there was a serpent carved in stone.

As I explained,  in ‘The Pleiades Legacy (The Old World)’, there was something special about the serpent, which the Sumerians associated with the Anunnaki  gods,  and it’s found  in legends, and  religious art, in the Ancient Middle East, Egypt, Central Asia and West Africa.  It was also of religious significance in Central America among the Aztecs and Maya. Feathered Serpent from the Quetzalcoatl temple in Teotihuacan, Mexico The imperial gates are reminiscent of what one would see in an ancient Chinese fortress, with the dragons portrayed as a 4-legged serpent with horns and scales. Found on the entrance of what used to be the main building of the palace, these gates and stone dragons, along with the palace’s architecture serve as a reminder of Vietnam’s early East Asian heritage. [ image source >> ] Pyramids were built in many parts of the world from stone, brick and clay. Regardless of whether they were religious monuments, or tombs for the nobility, they were artificial mountains which, like Ancient Greece’s Mount Olympus, were associated with the gods.

And , to be nearer to the realm of the gods, the Ancients often built their temples on high places. But what is really intriguing is that the same sacred geometry was incorporated into the design of state pyramids in Egypt,  the Middle East and Central and South America.

Stories about the pre-deluge visit of the star-gods, passed from generation to generation , around the world,  and there were similar descriptions of their humanlike appearance in Egypt and the Americas. The high tech equipment, which the ‘gods’ reputedly brought with them, was said to have had several functions and it became associated with gods, and rulers, throughout the Old and New Worlds. It’s still an item of royal regalia in many countries.

Astronomer priests played an important role in many early religions and, in both the Old and New Worlds, many religious sites were aligned to the solstices and equinoxes. Ursa Major and Orion appeared in religious traditions on both sides of the Atlantic but the most important stars, not only in these two regions but throughout the Early World, were the Pleiades which were associated with The Flood, agriculture, and the great civilisers of man. In many countries, the agricultural season began when they appeared and special ceremonies were celebrated at certain times when they appeared during the year. Some Old and New World calendars were also regulated by the Pleiades.

Several years ago, it was reported that 5000 year old Japanese Jomon pottery had been discovered on the coast of Ecuador in South America. But there is also some other interesting evidence of early contact between the Americas and the Orient. When I was visiting the famous Mayan site of Chichen Itza , in Mexico,  I met, and spoke to, professor Gualberto Zapata Alonzo, whose book ‘An Overview of the Mayan World’, I  had only just bought that day. In his book, Alonzo quotes James Churchward as saying ‘ a Mexican Indian and a person from Japan can understand each other without the use of an interpreter. There are many common roots in both their languages’. Alonzo also mentions that in a 1969 book, by Yucatan author Don Ignacio Magaloni Duarte, (Educador del Mundo), there are photographs of a Babylonian bowl with Mayan ornamentation and an Assyrian vase with the same type of design as found in Mayan temples’. There were sacred numbers in many of the early religions and Nine ,one of them, was special to the Maya and the Chinese both of whom built religious structures on nine levels. The same number frequently appears in Norse mythology and in many legends across the Northern hemisphere.

One of the fascinating peoples who lived in Early Mexico were the Olmecs. It is not known where they originated but some of their huge stone statues have African, Semitic and Oriental features which suggests that they were of mixed race. On one Olmec stone stele , at La Venta, there is a representation of a group of gods whom I have identified with Mayan creator gods. It could be said that there is nothing special about this, because both these peoples lived in the same country, but what has previously been overlooked is that they had counterparts in the religions of Ancient Assyria and Persia. And what is even more amazing  is that there are religious traditions, recorded in the Quiche-Mayan Popul Vuh, which are remarkably similar to those associated with the Sumerian gods of the Upper and Netherworld regions.  And also, there was a popular Central American Native tradition which sounds as if it was adopted from  the Egyptian Book of the Dead. Conservative scholars place no particular significance on the African features of some of the Olmec stone heads but some alternative researchers have tried to identify them with African tribes. What I have discovered,  though, is that there were similar serpent-linked, sky-god, legends in West Africa and Central America and similar tribal traditions in Central America and West and East Africa.

There have been many controversial claims about contact between the Old and New Worlds. These include reports of Phoenician and Ogham writing found on rocks in North America, the claim that, in 1976, remains of  Roman amphorae had been found 15 miles of the coast of Rio de Janeiro Brazil and also later reports of other Roman finds. There  is also a legend that the Welsh Prince Madoc , and his followers, made a return trip to America in 1170  and that the Mandan Indians are descended from them. However, what shook the Establishment up,  20 years ago, was the claim that cocaine had been found in some Egyptian mummies. This claim was dismissed, by conservative scholars, because, in their opinion, there was never any contact between Egypt and the New World where the drug originated. After the story was proved to be true, the subject slipped out of the news and, not  surprisingly, it did not result in a revision of early history.

Some alternative scholars believe that the remote Easter Island, in the Pacific, was part of a lost continent and that its mysterious long-eared stone statues, the moai, date back many thousands of years. However, there is evidence to suggest that the islanders were following their own version of the sky-god religion. Also, one Easter Island legend, which is part of a series that has appeared, over the years, in many parts of the world,is similar to others in Polynesian Hawaii and among Native American peoples in California.

In conclusion, it should be mentioned that the significance of the end of the Mayan calendar round, on the December solstice of 2012, has been misunderstood. It’s not about the end of the world, as many worried people believe, (although it seems to be going that way at present), because, as I explain in my recent book ‘The Pleiades Legacy (The New World)’,  it’s a momentous date in the Mayan ‘sky-god’ religion. An ancient Maya text has emerged from the jungles of Guatemala confirming the so-called “end date” of the Maya calendar, Dec. 21, 2012. Considered one of the most significant hieroglyphic finds in decades, the 1,300-year-old inscription contains only the second known reference to the “end date,” but does not predict doomsday.

For some strange reason, many scholars overlook the fact that the inner traditions of some  North American native peoples are remarkably similar to those of the early civilisations of Central and South America and so when the former say that they are awaiting the return of the sky-people, it’s apparent that they are referring to those beings who the Aztecs, Maya, Incas  etc, worshipped as gods.

In this article:Ancient Astronauts, Anunnaki, UFO