As you can see from the photo of the printed sample of the 2017 economist magazine, there is a comet on the cover, surrounded by either planets, or stars, or falling meteorites.

Since comets and asteroids are a favorite design theme for all sorts of global publications, one could not pay attention to a comet, but to another tarot card. This card is called The Magician, and in our case he has an infinity sign over his head which strongly resembles another famous guy:

The infinity symbol is very popular and all this may be a coincidence, but the problem is that the wizard on the Tarot card is not quite ordinary:

The difference between the magician on the cover and the magicians in other decks is the presence of some kind of mask with a wire extending from it, which makes it possible to consider it as augmented reality glasses.

And so, it must have coincided that simultaneously with the rebranding of Facebook into Meta, they made an announcement for the release of some cool new augmented reality headset:

Is the tarot Magician leading the “emigration” of people to an alternative reality – with the illusion of personal presence, the creation of an alter ego in the form of an avatar and ample opportunities for communication – which will be warmly supported by humans who are tired of restrictions due to COVID-19? In reality, this will mean a transition to unlimited control over human thoughts, feelings and emotions.

It is important that for this, not only trivial AR glasses or sensor gloves will be used, but also “neural interfaces” that use “unused neuromotor pathways” in the human body. As Zuckerberg put it, “You can send a text message just by thinking about wiggling your fingers.” If you look at it, we are talking about the fusion of the human brain and the computer, which opens the way to the creation of androids based on living people.

People relocated to the Matrix will not even notice that in reality their bodies are placed in cages, they wear disposable clothes and eat synthetic food under the vigilant eye of “Big Brother”.

And now this already does not look like a coincidence; rather, it is about the presentation of some marker events of the future by The Economist, from which a comet, Meta and protests around the world are aforementioned on the cover. Perhaps even the pandemic.

Therefore, if we assume that The Economist did not issue a calendar for 2017 in the cover, but simply some sequence of events, then in the near future one should expect: a loud resignation of three politicians (two women and one man), a fall of some kind of tower, nuclear war and Donald Trump, sitting astride planet Earth. Maybe there will even be an alien contact who will endow people with some kind of scattering of books and knowledge.

Unless of course, we have all been fooled and aliens live among us and some very serious entities with very serious plans are behind Facebook, Instagram and WhatsApp. Therefore, when people saw the Meta splash screen, it could not help but raise questions:

At the very front edge, we see something like a flying balcony or space platform in the asteroid belt. On the right, there is something similar to the moon, on the left is Earth and Mars. But what is that red in the center of the picture?

Some speculate that it is Jupiter, the healthiest planet in the solar system but its unlikely. What kind of planet it is and why it became a wallpaper, it is unknown.

In this article:Meta, The Economist 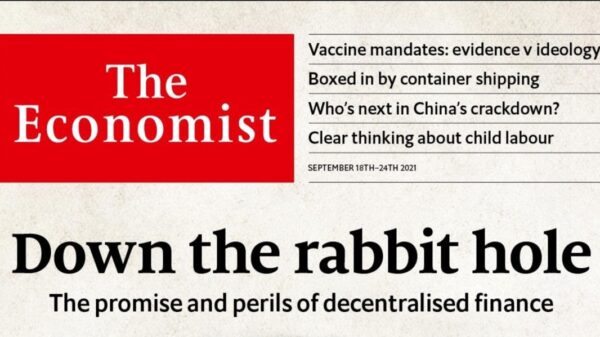 Last week, The Economist delighted conspiracy theorists with a new cover. On it, under the watchful eye of Alice and the Rabbit, with the participation...