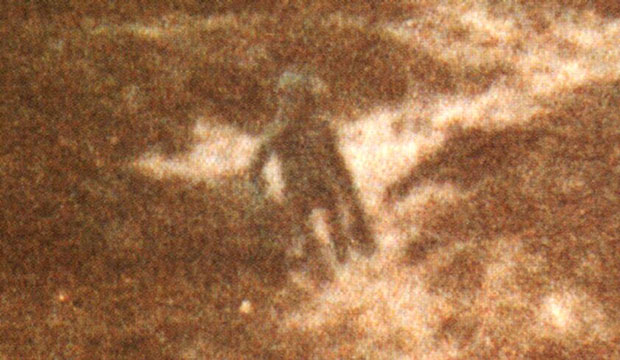 The cold and dreary moorland in England known as Ilkley Moor is a place in which you don’t want to get stuck after the sun goes down. When a freezing chill begins to sink low to the ground and the surrounding darkness is met with an encroaching menacing fog. A place where hazard-friendly trails snake through acres of wet, isolated land and where strange lights have been reported. A place where in the winter of 1987 a former police officer encountered a strange creature standing up ahead on a trial path. Startled by the humanoid being, Philip Spencer managed to snap a single photograph of the creature. What follows is the story of the unsolved mystery of the Ilkley Moor Alien photograph.

Philip Spencer is a pseudonym for the former police officer who early one December morning decided to hike across the moor to visit his In-laws. Having heard stories of strange lights that have been spotted near the Ilkley Moor, Spencer took with him his camera to capture them on film. He had also taken with him a compass to help him navigate through the early morning fog.

Coming upon a small hill he noticed something odd moving just up the trail ahead of him. As Spencer looked on, he realized that the mysterious figure looked humanoid. He raised his camera, pointed and clicked.

Just then the being raised its arm, as if waving him away, and then began to move down the trail. Disappearing out of Spencer’s sight. Curious, the former police officer started to make his way up the narrow path in chase of the mystery creature.

Just as he reached was reaching the top of the trail he stopped in his tracks. In the close distance, a large dome topped craft lifted up from the moor and rose out of sight into the morning sky. He did not take a second photograph, Shocked at what he had just seen, Spencer quickly made his way to the nearest village.

About half hour after the sighting, Spencer made it to the village. Along the way he had noticed that his compass was broken. It pointed south instead of north, which was the complete opposite of where Spencer was. Thinking nothing of it, he continued into the village only to stop again when he glanced at his wrist watch. It was an hour behind of what he knew the time should have been.

A whirlwind of worried thoughts swirled through Spencer’s head as he began to question his sanity. What had he seen out in the lonely moorland that morning and what happened to the missing time? When Spencer developed the photograph he was shocked to see that he had captured exactly what he claimed to have encountered out in the moor. A short human-like creature with a bulbous head and long, thin arms.

Spencer contacted Peter Hough, a well known UFO researcher, and told him of his experience that December morning. Immediately upon examining the print, Hough thought of it as intriguing enough to be studied. He sent the photograph to the Kodak laboratories in Hemel, Hempstead for further analysis. Of which the only conclusive result was that whatever the creature or object is, it is definitely in the original photograph. Meaning it was not proven to be a superimposed image. Hough examined the compass next. He did not find anything out of the ordinary about it so he decided to have the compass checked for radiation at a local University. The results came back negative. As far as everyone was concerned, there was nothing wrong with the compass. The above photograph shows UFO researcher Arthur Tomlinson standing in the exact spot where the ‘creature‘ stood.

Shortly after the sighting, Spencer began to tell Hough about strange “starry dreams” that he was experiencing. Hough, being familiar with abduction cases and missing time, suggested to Spencer that he go under hypnosis. A session was scheduled on March 16th, 1988 with Dr. Jim Singleton and UFO researcher Arthur Tomlinson.

What follows is part of the transcripts and commentary (in parenthesis) from Peter Hough from the session that night:

Spencer– I’m walking along the moor, oh! its quite windy. There is a lot of clouds. Walking up towards some trees.

I see this little something, can’t tell, but he’s green it’s moving up towards me.

Oh! I’m stuck I can’t move and the creature still coming towards me.
I’m stuck and everything gone fuzzy.
I’m, I’m floating along in the air I want to get down!

I still can’t get down and I don’t like it.
I’m going round this corner and this green thing is in front of me.

Oh God! I want to get down! (long pause) (breathing faster)
There’s a there is a big silver saucer thing there’s a door in it.

And I don’t want to go in there. (worried sound in his voice) (sigh) Everything gone black now. (pause).

JS– you say everything gone black?

Spencer– Mmm! I can’t see anything like I’m asleep, can’t hear anything.

(short pause) There’s a bright light now.
Can’t see where it’s coming from?
I’m in a funny sort of room I can hear this voice saying don’t be afraid.

I’m being put on a table.
I can move now if I want to, but I don’t feel frightened any more and there’s a beam like a pole it’s above me it’s moving up toward me.

It’s got a light in it like a fluorescent tube. It’s coming up from my feet I can hear that voice again saying “we don’t mean to harm you and don’t be afraid.

” Makes me feel warm as it moves up me it’s coming up over my stomach towards my head.

Close my eyes I don’t want to look at it in case it hurts my eyes.

It’s gone! (pause) there is something my nose feels funny (shows movement of nose) that’s gone as well, I’m standing up now I don’t know how I got stood up?

I can see a door there is one of these green creatures motioning for me to come with him.

Don’t really want to go with him. I’d rather stay here I don’t feel afraid in here (pause).

JS– Can you tell me what’s happening now?

Spencer– I’m walking towards a door there is still a bright light there is light all around want to know where its coming from its just bright all around.

Walking down a corridor there is a window.
Oh! God!(sounds shocked)is that real? (deep sigh) (pause) (sounds afraid) don’t want to be up here want to be down there?

I can hear that voice again saying you’ve got nothing to fear.
Its pretty though didn’t realize it looked so pretty.

(What Jon was looking at through the window was the earth seen from high in space just like the Apollo astronauts saw.
I’ve gone past the window now I’m walking down a corridor. (long pause)

Spencer– Come to the end of the corridor.
There’s a hole opened in it so I can walk through. I’m in a big room-a big round room, I’m on a raised platform against the wall.

My camera and compass are trying to get away from me.
Going towards the ball.

It’s difficult to pull them back down again, and this balls moved round with strange its got some blocks on it he says we cant stay in here to long he wants us to go out again the holes closed in the wall its gone strange he says I’ve got nothing to fear but Id still like to go home (pause) its got such big hands.

Spencer– Going down a corridor again.
Its very bright still I wish I knew where the light was coming from.

And there is another door, going through a door it’s an empty room two of those green creatures have come with me.

There’s a picture ,it’s starting to move on the wall wonder how they get the pictures?

JS– Can you tell me what’s happening at this point?

Spencer– I’m looking at the pictures on the wall. (long pause)

JS– Pictures on the wall?

Spencer– Mmmm. Creatures seem concerned at the damage that its doing.

Picture changing now there’s another picture, another film he’s asking me a question he says do you understand?

I said yes. It’s time to go.
Everything gone black.
I’m walking up the moor again,
I’m walking near some trees.
Some movement – I can see something.

A green creature. I’ve shouted to it.
It’s turned round. I don’t know what it is.

I’ll photograph it it’s turned around now.
It’s moving quick want to know what it is.

I’m running after it, it’s gone round a corner, I can’t see it now.

There’s … There is a saucer (laughingly), big silver saucer! It’s disappeared? I’m walking on down gone past the trees.

JS– You mentioned some green creatures. Would you try to describe them to me?

They’re quite dark, he hasn’t got a nose he’s only got a little mouth.

And his hands are enormous.
And his arms are long.
He’s got funny feet.

He shuffles rather than walks.
I don’t feel afraid of him although he looks odd.

JS– You mentioned big hands? Can you say anymore about the hands?

JS– About how tall would you say these creatures are?

Spencer– It’s about four foot. Comes to the lump on my stomach.
He’s about as high as – just a bit bigger than my stomach is.

JS– Okay. Now I wonder if I can ask you another question? you mentioned a film?

Spencer– There were two films.

Spencer– One was lots of scenes of destruction like on the news.
Can see lots of waste going into the river, and people like Ethiopians who are starving.
It’s not very good, it’s not very nice.

JS– Want to say anything more about that film?

Spencer– It’s much of the same thing, only different.

JS– What about the other film then? Do you want to tell me about it?

Spencer– I’m not supposed to.

JS– I’ll leave that up to you entirely, do you want to say anything about that?

Spencer– I’m not supposed to tell anyone about the other film, it’s not for them to know.

JS– Is there any thing more?

We’re left with the assumption that what Mr. Spencer experienced in 1987 was a typical case of abduction. The missing time, magnetic disturbances and reoccurring nightmares all seem to be indicative of that. Combined with Mr. Spencer’s eerie account and his claim of photographic evidence of what he saw that day, it’s a perfect recipe for an alien abduction case.

However just because a laboratory from Kodak determines that the original photograph does not show signs of superimposing or any other photo manipulation it does not mean that it’s proof positive of the existence of alien creatures on our planet. For all we know Mr. Spencer might have been a crafty man with a lot of spare time, hoping to pull one over on the world.