Some important documents have been uncovered by Abe Zucca, an artist from Arizona. The documents uncovered include an original Nikola Tesla map to multiplication which is said to contain answers to questions mathematicians have been trying to solve for years. Among the documents, there are also drawings of handheld technological devices and manuscripts detailing free-energy systems.

Joey Grether, a high school teacher, examined the documents and said of the Map of Multiplication, that it, “offers a comprehensive visual understanding of how all numbers are self-organized into 12 positions of compostability.” He continued to say, “This breakthrough is phenomenal. If we could get students all over the globe to use this technique, to play with it, and help figure out how to use it, we could overcome our cultural aversion to Mathematics. Instead of memorizing the multiplication table, we could learn the positions of numbers and have a better understanding of how they work.”

All numbers work together based on a pattern of twelve numbers also known as 12x or multiples of twelve. There are twelve months in the year, twelve hours on the clock (and twenty-four in a day) and twelve inches in a foot. Twelve is thought to be the most highly recognised composite system with all it’s multiples being divisible by 2, 3, 4 and 6. With a chance of four in twelve numbers being prime, this is another key reason for twelve being an important number.

Numbers, according to this diagram, organise themselves into the pattern of 3, 6, 9 and 12 repeating the sequence, and a quote by Tesla which said, “If you only knew the magnificence of the 3, 6 and 9, then you would have the key to the universe, “suggests that this is vital to solving many of the problems mathematicians have long been trying to uncover. 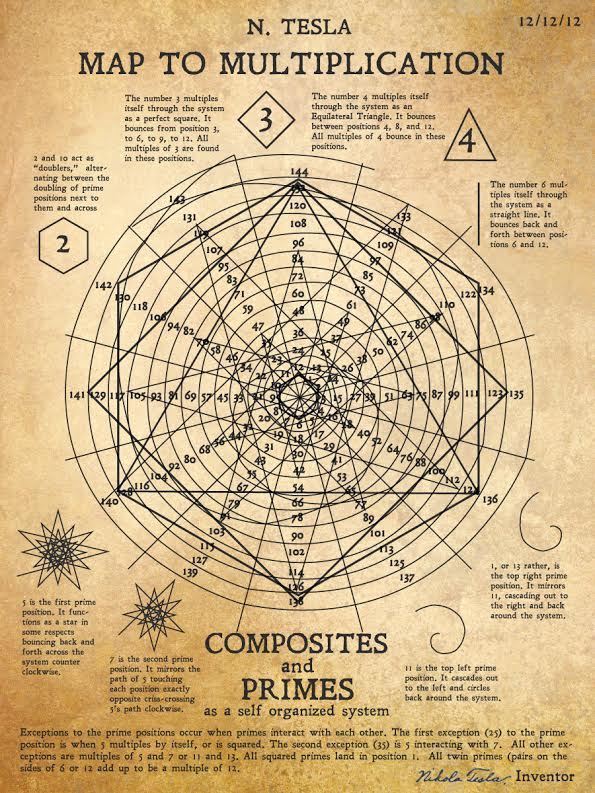 Advertisement. Scroll to continue reading.
In this article:Nikola Tesla, numbers