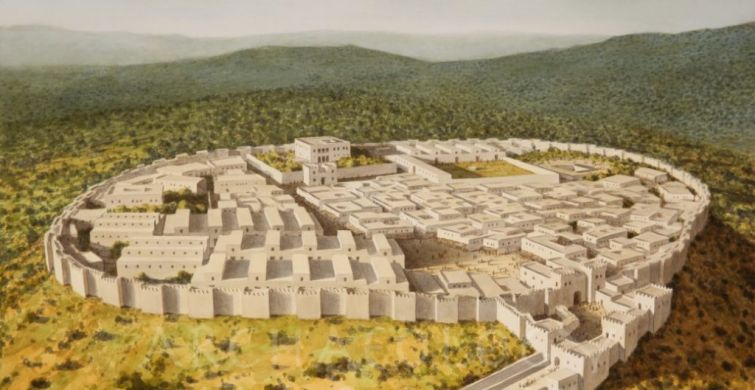 Another city hiding behind biblical history is Megiddo, also known as Armageddon.

Not everyone knows that behind the word Armageddon, which everyone has heard, hides the name of one of the most ancient cities in the world.

This ancient city, which was inhabited already in 7000 BC. e., is known for the numerous battles that were fought here. The Book of Revelation, which calls this place Armageddon, predicts that the last battle between the forces of good and evil, expected at the end of all time, will also take place here.

Armageddon is mentioned in the Bible dozens of times. This name comes from the Greek “Ἁρμαγεδών”.

Visiting the ruins of this city today, the first thing you will see is a large embankment – tell, which was formed from many cultural layers that appeared here over several millennia of the existence of this city. Archaeologists know that inside this tell there are actually about 20 ancient cities, built one above the other: several civilizations gave way here to one another, the city was captured and rebuilt many times. We can say that Armageddon has already happened here many times – each time the end of the world for one culture and its beginning for another.

Many historical battles have taken place here. For example, the Egyptian pharaoh Thutmose III, nephew and heir to the Egyptian queen Hatshepsut, who became her successor and ruled in 1479-1425 BC. BC, defeated a coalition of cities at Megiddo and with this victory captured most of the eastern Mediterranean.

The second important event occurred when the Jewish king Josiah was defeated near Megiddo during a battle with the Egyptian pharaoh Necho (reigned 610 – 595 BC). Josiah was greatly weakened and after a decade his kingdom was finally destroyed by the Babylonian king Nebuchadnezzar II.

Even in our times, significant battles took place near Megiddo. So, in 1918, during the First World War, the allied army, led by General Edmund Allebi, defeated the Ottoman army at Megiddo. The losses were so crushing that the Ottoman Empire was forced to resort to a truce.

It really made sense to fight for Megiddo, since the city was strategically located in the Jezreel Valley, which was the crossroads of several trade routes. It turned out that the one who controlled Megiddo controlled the trade route between Egypt, Europe and Mesopotamia. These trade routes and pompous battles have had the greatest impact on the city’s history and built it up as a biblical battlefield. Perhaps that is why Megiddo was identified as the place of the end of the world, as it was the epicenter of armed conflict throughout Israel’s history. Many archaeological finds have been made at Meggido, the most important by the University of Chicago expedition in the 1930s. The loudest discovery then was the discovery of a series of stables, which were believed to have been built by King Solomon. Today most archaeologists no longer think so. However, this is direct evidence that a large cavalry army was stationed in the city.

Another unusual find made by the Chicago Expedition is a variety of ivory items, about 382 items in total, that were found among the burials of people and animals. Some of these items bear Egyptian hieroglyphic inscriptions. So, on the case for the stylus it is said that it belongs to an Egyptian official named Nakht-Amon, who was the “emissary of the king” during the reign of Pharaoh Ramses III (1184-1153 BC). In addition, game boards, combs were found. and ivory boxes. such a large number of objects from this material in the burial place caused great confusion among scientists. The carvings on ivory are made using a mixture of Hittite, Mycenaean, Egyptian, Ugaritic, Canaanite and Assyrian motifs.

Not so long ago, in 2014, another very important find was made in Megiddo – this is the “Great Temple”, which dates back to 3000 BC. e. It is a large rectangular room with two small corridors behind it, and traces of rituals were also found here. This temple is the most monumental structure of that time in the eastern Mediterranean.

It is not surprising that Megiddo, as the site of numerous battles, had a massive fortification. The Chicago Expedition discovered a complex gate system that the researchers believe dated back to the time of King Solomon. These included two large towers in front, which housed archers, and a system of chambers inside which could house soldiers with spears and swords in case the enemy broke through the gate. The dating of the gate is currently controversial.

As in Bathsheba, a complex ancient tunnel water supply system was found here, which brought water to the city from a nearby source through underground tunnels located at a depth of 30 meters. Archaeologists consider this water delivery system to be Megiddo’s most impressive technological achievement. Thanks to its inhabitants, they had constant access to water, even when the city was under siege.

Archaeological work continues today and is led by archaeologists from Tel Aviv University in Israel. The ancient city attracts thousands of tourists every year, many of whom come here inspired by the prophecy of a battle at the end of time. Guides often greet their guests by saying, “Welcome to Armageddon.”

In this article:biblical history, city of Armageddon