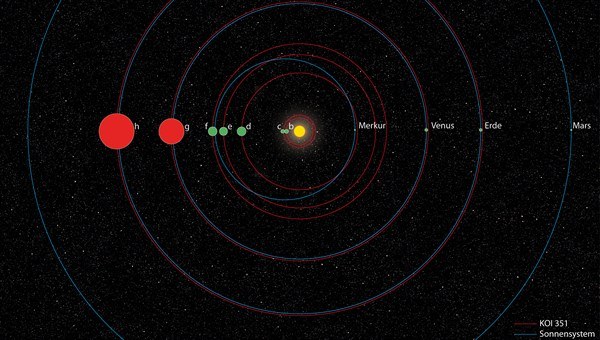 A team of European astronomers has discovered a second solar system, the closest parallel to our own solar system yet found. It includes seven exoplanets orbiting a star with the small rocky planets close to their host star and the gas giant planets further away. The system was hidden within the wealth of data from the Kepler Space Telescope.

KOI-351 is “the first system with a significant number of planets (not just two or three, where random fluctuations can play a role) that shows a clear hierarchy like the solar system — with small, probably rocky, planets in the interior and gas giants in the (exterior),” Dr. Juan Cabrera, of the Institute of Planetary Research at the German Aerospace Center, told Universe Today.

Three of the seven planets orbiting KOI-351 were detected earlier this year, and have periods of 59, 210 and 331 days — similar to the periods of Mercury, Venus and Earth.

But the orbital periods of these planets vary by as much as 25.7 hours. This is the highest variation detected in an exoplanet’s orbital period so far, hinting that there are more planets than meets the eye.

In closely packed systems, the gravitational pull of nearby planets can cause the acceleration or deceleration of a planet along its orbit. These “tugs” cause the variations in orbital periods.

But these planets are much closer to their host star than Mercury is to our Sun, with orbital periods of 7, 9, 92 and 125 days. The system is extremely compact — with the outermost planet having an orbital period less than the Earth’s. Yes, the entire system orbits within 1 AU.

While astronomers have discovered over 1000 exoplanets, this is the first solar system analogue detected to date. Not only are there seven planets, but they display the same architecture — rocky small planets orbiting close to the sun and gas giants orbiting further away — as our own solar system.

In this article:discovered, Solar System

Time is Speeding Up? Phenomenon is Preparing You For 5D