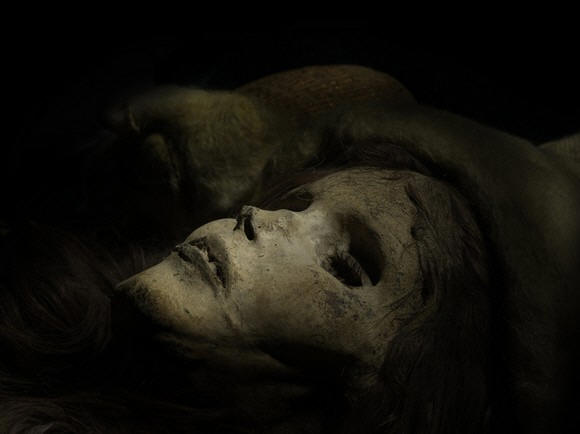 The Tarim Mummies: Ancient China and the Mystery of the Earliest Peoples from the West

The Tarim mummies are a series of mummies discovered in the Tarim Basin in  Xinjiang, China, which date from 1900 BC to 200 AD.  In addition to being very well-preserved finds, controversy flows around them as DNA tests seem to show that they are the result of Asian and Caucasian mating thousands of years before it’s commonly thought that the two peoples intermingled.

The Tarim mummies are a series of mummies discovered in the Tarim Basin in present-day Xinjiang, China, which date from 1800 BCE to 200 CE. The mummies, particularly the early ones, are frequently associated with the presence of the Indo-European Tocharian languages in the Tarim Basin, although the evidence is not totally conclusive and many centuries separate these mummies from the first attestation of the Tocharian languages in writing. Victor H. Mair’s team concluded that the mummies are Europoid, likely speakers of Indo-European languages. The possible presence of speakers of Indo-European languages in the Tarim Basin by about 2000 BCE could, if confirmed, be interpreted as evidence that cultural exchanges occurred among Indo-European and Chinese populations at a very early date. It has been suggested that such activities as chariot warfare and bronze-making may have been transmitted to the east by these Indo-European nomads. Pliny the Elder (, Chap XXIV “Taprobane”) reports a curious description of the Seres (in the territories of northwestern China) made by an embassy from Taprobane (Ceylon) to Emperor Claudius, saying that they “exceeded the ordinary human height, had flaxen hair, and blue eyes, and made an uncouth sort of noise by way of talking”, suggesting they may be referring to the ancient Europoid populations of the Tarim Basin:


“They also informed us that the side of their island (Taprobane) which lies opposite to India is ten thousand stadia in length, and runs in a south-easterly direction—that beyond the Emodian Mountains (Himalayas) they look towards the Serve (Seres), whose acquaintance they had also made in the pursuits of commerce; that the father of Rachias (the ambassador) had frequently visited their country, and that the Seræ always came to meet them on their arrival. These people, they said, exceeded the ordinary human height, had flaxen hair, and blue eyes, and made an uncouth sort of noise by way of talking, having no language of their own for the purpose of communicating their thoughts. The rest of their information (on the Serae) was of a similar nature to that communicated by our merchants. It was to the effect that the merchandise on sale was left by them upon the opposite bank of a river on their coast, and it was then removed by the natives, if they thought proper to deal on terms of exchange. On no grounds ought luxury with greater reason to be detested by us, than if we only transport our thoughts to these scenes, and then reflect, what are its demands, to what distant spots it sends in order to satisfy them, and for how mean and how unworthy an end!”

DNA sequence data shows that the mummies had Haplogroup R1a (Y-DNA) characteristic of western Eurasia in the area of East-Central Europe, Central Asia and Indus Valley.


A team of Chinese and American researchers working in Sweden tested DNA from 52 separate mummies, including the mummy denoted “Beauty of Loulan.” The features of the Loulan Beauty have been described as Nordic in appearance. She was approximately 45 years old when she died. By genetically mapping the mummies’ origins, the researchers confirmed the theory that these mummies were of West Eurasian descent. Victor Mair, a University of Pennsylvania professor and project leader for the team that did the genetic mapping, commented that these studies were:

…extremely important because they link up eastern and western Eurasia at a formative stage of civilization (Bronze Age and early Iron Age) in a much closer way than has ever been done before.[11]

An earlier study by Jilin University had found an mtDNA haplotype characteristic of Western Eurasian populations with Europoid genes.


In 2007 the Chinese government allowed a National Geographic Society team headed by Spencer Wells to examine the mummies’ DNA. Wells was able to extract undegraded DNA from the internal tissues. The scientists extracted enough material to suggest the Tarim Basin was continually inhabited from 2000 BCE to 300 BCE and preliminary results indicate the people, rather than having a single origin, originated from Europe, Mesopotamia, Indus Valley and other regions yet to be determined.


In 2009, the remains of individuals found at a site in Xiaohe were analyzed for Y-DNA and mtDNA markers. They suggest that an admixed population of both west and east origin lived in the Tarim basin since the early Bronze Age. The maternal lineages were predominantly East Eurasian haplogroup C with smaller numbers of H and K, while the paternal lines were all West Eurasian R1a1a. The geographic location of where this admixing took place is unknown, although south Siberia is likely.


It has been asserted that the textiles found with the mummies are of an early European textile type based on close similarities to fragmentary textiles found in salt mines in Austria, dating from the second millennium BCE. Anthropologist Irene Good, a specialist in early Eurasian textiles, noted the woven diagonal twill pattern indicated the use of a rather sophisticated loom and, she says, the textile is “the easternmost known example of this kind of weaving technique.”

Mair claims that “the earliest mummies in the Tarim Basin were exclusively Caucasoid, or Europoid” with east Asian migrants arriving in the eastern portions of the Tarim Basin around 3,000 years ago while the Uyghur peoples arrived around the year 842. In trying to trace the origins of these populations, Victor Mair’s team suggested that they may have arrived in the region by way of the Pamir Mountains about 5,000 years ago.

Mair has claimed that:

The new finds are also forcing a reexamination of old Chinese books that describe historical or legendary figures of great height, with deep-set blue or green eyes, long noses, full beards, and red or blond hair. Scholars have traditionally scoffed at these accounts, but it now seems that they may be accurate.

Chinese historian Ji Xianlin says China “supported and admired” research by foreign experts into the mummies. “However, within China a small group of ethnic separatists have taken advantage of this opportunity to stir up trouble and are acting like buffoons. Some of them have even styled themselves the descendants of these ancient ‘white people with the aim of dividing the motherland. But these perverse acts will not succeed’“. Barber addresses these claims by noting that “[The Loulan Beauty] is scarcely closer to ‘Turkic’ in her anthropological type than she is to Han Chinese. The body and facial forms associated with Turks and Mongols began to appear in the Tarim cemeteries only in the first millennium BCE, fifteen hundred years after this woman lived. Due to the “fear of fuelling separatist currents“, the Xinjiang museum, regardless of dating, displays all their mummies, both Tarim and Han, together.

In the late 1980′s, perfectly preserved 3000-year-old mummies began appearing in a remote Taklamakan desert. They had long reddish-blond hair, European features and didn’t appear to be the ancestors of modern-day Chinese people. Archaeologists now think they may have been the citizens of an ancient civilization that existed at the crossroads between China and Europe. Victor Mair, a specialist in the ancient corpses and co-author of “Mummies of the Tarim Basin”, said:”Modern DNA and ancient DNA show that Uighurs, Kazaks, Krygyzs, the peoples of Central Asia are all mixed Caucasian and East Asian. The modern and ancient DNA tell the same story.” The discoveries in the 1980s of the undisturbed 4,000-year-old ”Beauty of Loulan” and the younger 3,000-year-old body of the ”Charchan Man” are legendary in world archaeological circles for the fine state of their preservation and for the wealth of knowledge they bring to modern research. In the second millennium BC, the oldest mummies, like the Loulan Beauty, were the earliest settlers in the Tarim Basin.  –  Source>> Artist’s Impression of the Beauty of Loulan

How did tartan-wearing Indo-Europeans come to be in Asia 2,000 years before West and East admitted each others existence? Describing their discovery of the Tarim Mummies and revealing the attempts of scientists to determine their ethnic identity, the authors examine all the evidence connected with the mummies, including textiles and languages of the Tarim region, in this acclaimed tour-de-force of scholarship.
The book examines the clues left by physical remains; economy, technology, and textiles; and traces of local languages. It is the definitive account of one of the most extraordinary archaeological discoveries of recent times.

Simon Narramore, aka 62Lofu on Flickr, has taken a series of photographs of people in an area of Western China that almost look like whole families from Dublin or London or Glasgow. While they are certainly not Irish, they certainly LOOK Irish to me, and not surprisingly, they are located close to both the ancient spice route and the Gobi Desert areas. As I have repeated many times, via ancient Celtic, Greek, and Judaic influences and ancestries that all our families have, some of our families went East, some went West, and these photographs are certainly proof.  – Source>> In this article:China, Tarim Mummies