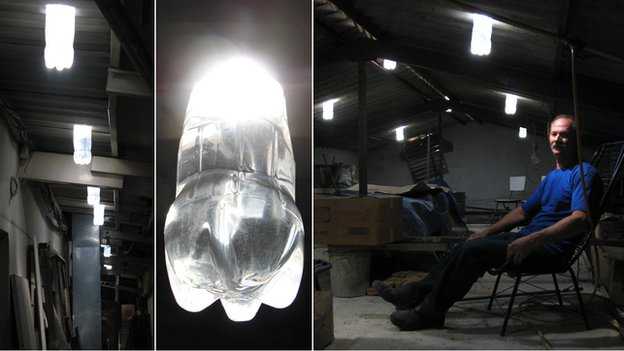 Alfredo Moser’s invention is lighting up the world. In 2002, the Brazilian mechanic had a light-bulb moment and came up with a way of illuminating his house during the day without electricity – using nothing more than plastic bottles filled with water and a tiny bit of bleach.

In the last two years his innovation has spread throughout the world. It is expected to be in one million homes by early next year.

So how does it work? Simple refraction of sunlight, explains Moser, as he fills an empty two-litre plastic bottle.

“Add two capfuls of bleach to protect the water so it doesn’t turn green [with algae]. The cleaner the bottle, the better,” he adds.

Wrapping his face in a cloth he makes a hole in a roof tile with a drill. Then, from the bottom upwards, he pushes the bottle into the newly-made hole.
“You fix the bottle in with polyester resin. Even when it rains, the roof never leaks – not one drop.” The inspiration for the “Moser lamp” came to him during one of the country’s frequent electricity blackouts in 2002. “The only places that had energy were the factories – not people’s houses,” he says, talking about the city where he lives, Uberaba, in southern Brazil.

“An engineer came and measured the light,” he says. “It depends on how strong the sun is but it’s more or less 40 to 60 watts,” he says.

While he does earn a few dollars installing them, it’s obvious from his simple house and his 1974 car that his invention hasn’t made him wealthy. What it has given him is a great sense of pride.

Following the Moser method, MyShelter started making the lamps in June 2011. They now train people to create and install the bottles, in order to earn a small income.

In the Philippines, where a quarter of the population lives below the poverty line, and electricity is unusually expensive, the idea has really taken off, with Moser lamps now fitted in 140,000 homes.

The idea has also caught on in about 15 other countries, from India and Bangladesh, to Tanzania, Argentina and Fiji.

In this article:Alfredo Moser, light-bulb