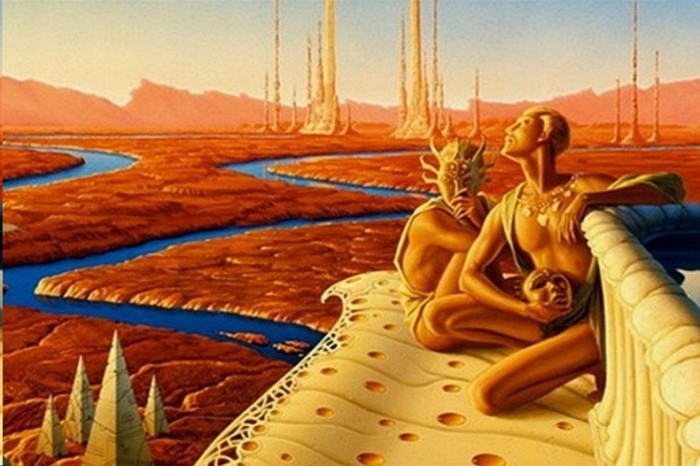 The Swiss psychologist Theodore Flournoy did not know that, having accepted an invitation from a colleague to attend a seance, he would spend five years of his life studying the secrets of the medium’s subconscious. A tall, beautiful woman sat at a round table, glaring at those who came.

Eliza Müller recently turned 33 years old, but she never got married. At the end of the 19th century, this was considered a tragedy. Eliza did not take money for the sessions, earning good money in the accounting department of a famous trading house. Talking about her, Flournois hid her real name, giving Frau Müller the pseudonym Helen Smith.

During the session, she was transformed, falling into a trance. Her eyes opened wide, her gaze rushed into space or wandered senselessly. At this moment, Eliza’s dilated pupils did not react to the bright light, and her face turned into a lifeless mask. A few minutes later, Eliza began to speak on behalf of the “spirit” that had infiltrated her – Cagliostro, Marie Antoinette, Victor Hugo and other celebrities.

At the same time, her voice completely changed, imitating those whose “spirit” was embodied in her. Sometimes Eliza spoke in a normal voice, describing the visions that appeared to her. In a trance, Frau Müller spoke to only one of those present, answering his questions. The rest of the people did not exist for her.

When Cagliostro moved into Eliza, she stood up, proudly straightening herself up, and began to speak, majestically crossing her arms over her chest. Her voice became loud and low, like that of a man, and her pronunciation was similar to Italian, with ancient turns. Cagliostro answered questions familiarly, referring to the interlocutor on “you”. 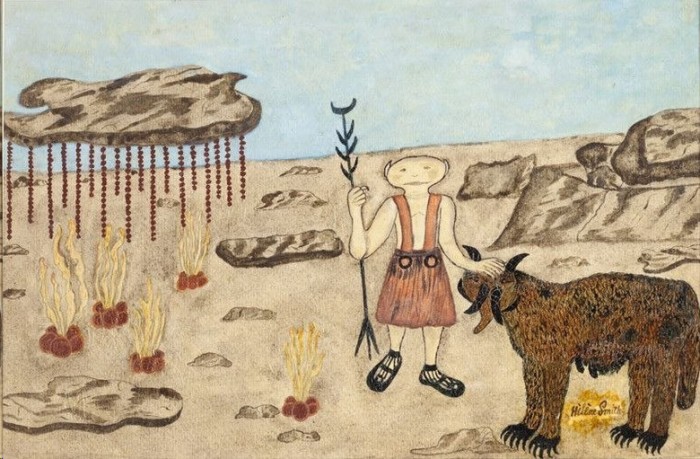 Another “spirit” that entered the medium was the Indian princess Simandini, the daughter of an Arab sheikh and the eleventh wife of Prince Nayak Sivruk of the Canary Islands, who built the Chandragiri fortress in 1401.

“The real daughter of the East appeared before us,” recalled Theodore Flournoy. – She sat on the ground with crossed legs; her solemn kneeling before the invisible incense burner, full of religious feeling, her arms crossed reverently on her chest and threefold bows gave the impression of inimitable naturalness; the melancholic tenderness of her songs, the free flexibility of her serpentine movements – such a varied facial expression, distinguished by a purely exotic character, all these movements bore the imprint of originality and ease. Unwittingly, bewilderment arose, how could a woman who did not know the East at all learn them.

During the sessions, Simandini uttered words and whole phrases that no one understood. When they were recorded and contacted by specialists, it turned out that she spoke Sanskrit. Once Eliza, in a trance, wrote a few words in a strange language. Experts in oriental writing told Theodore that this is an Arabic proverb: “A little friendship is already a lot.”

At the end of the session, announced by three knocks on the table, Frau Müller gradually returned to her normal state. It did not come immediately – it was preceded by several short awakenings, alternating with falling asleep. The woman who came to her senses did not remember what happened in the trance. 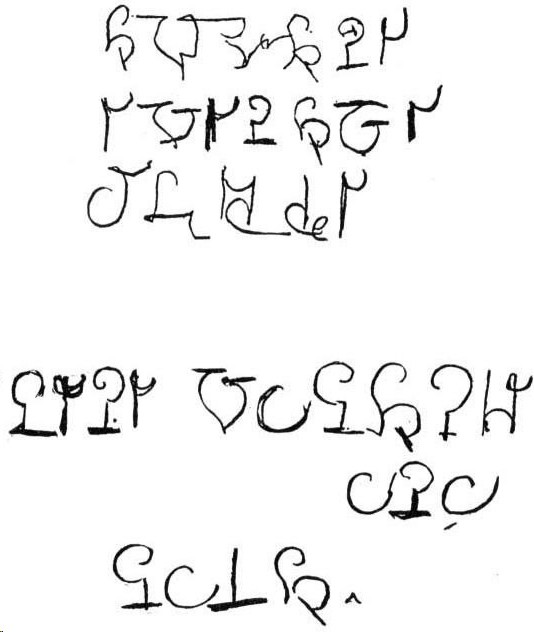 On November 25, 1894, immersed in a trance, Eliza saw a bright light at a high altitude. Then she felt herself pumped.

It seemed to her that her head was empty and her body was gone. Some force was carrying her up. Then Frau Müller saw a beautiful ball and was on its surface.

– Where I am? – She asked the familiar “spirit” who was nearby.

“On a planet called Mars,” he replied.

Eliza began to describe her first impressions. She saw carts without horses and wheels, which, sliding, scattered sparks; aircraft similar to coach lights; houses with water fountains on the roof; people who spoke a strange language and, greeting each other, gave clicks in the nose; children who slept in a cradle, which instead of curtains had an iron angel with outstretched wings …

Frau Müller began to visit Mars during almost every trance. Little by little, she learned to speak and write in Martian. It turned out that one of the rulers of the planet, a certain Astane, lived on Earth in a past life and was familiar with Simandini.

Once Eliza in the company of Astane attended a magnificent local celebration. Dressed in a sequined dress (she imagined it was a Martian one), she entered a large square hall, lit by lamps at the corners.

Many ornamental plants hung everywhere. In the middle of the room was a grove surrounded by small, shiny tables. Inside was a cheerful crowd of young men and women, whose hairstyles bore the appearance of a pink, blue, or green moth.

At a sign given by Astane, everyone sat down at the tables decorated with flowers. Two men placed square plates and forks without handles in front of the Martians. Then they served strange-looking dishes, but the taste was excellent. The holiday ended with dances and songs.

Even stranger things were said by Eliza about her visit to the Martian foster home. In the huge hall along the walls there were “cradles” that resembled changing tables. In each “cradle” lay a child.

Martians walked around the hall with domestic animals, which had a wide, flat, almost hairless head and large kind eyes, like those of seals. Their large udders were inserted into a square tube milking unit. The Martians now and then stuck a pipe into the mouths of babies, feeding them milk.

On the way to the solution 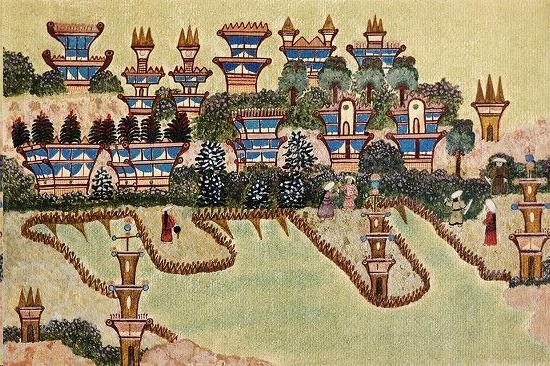 Trying to find out as much as possible about the past of the medium, Flournoy found the family doctor Frau Müller. After talking with an elderly doctor, the psychologist showed him a note with an Arabic proverb. The doctor replied that this was his writing style. Several years ago, he traveled to Arabia and knew Arabic well.

Every time he gave a book about travel to friends, he would add an Arabic saying to his autograph. Eliza saw one of the autographs and in a trance drew it from memory from left to right, and did not write, like a real Arab woman, from right to left.

When Flournois invited a famous linguist to the sessions, the scientist said that Simandini’s language is not real Sanskrit, but a mixture of it with words similar in sound, but at the same time meaningless. The linguist got the impression that Eliza somehow saw the Sanskrit dictionary or grammar and leafed through it out of boredom.

Frau herself, of course, had forgotten everything a long time ago, but the subconscious mind kept the words it saw in its memory and then used them during the trance, plugging the blanks with words of its own invention.

Then it was the turn to find out if Princess Simandini and her husband Sivruk existed. All historians amicably answered that these names were unfamiliar to them. Flournoy was ready to give up, but then an old book on the history of India, written in 1828, fell into his hands. Everything that the princess said to herself turned out to be exact quotes taken from there!

Flournoy was able to prove that the source of information from the “spirits” were books that Frau Müller read as a child and forgot. During her trance, her brain would extract pieces of forgotten memories and build plots from them – of course, without the knowledge of her sanity.

Scientists were presented with a fantastic game of the mind and subconscious, surpassing everything that they had previously encountered. The process, when fragments from long-forgotten memories float out and are perceived by the subject himself as something alien, otherworldly, Theodore called cryptomnesia.

The scientific assault on the “Martian language” was short-lived. Linguists said that the Martian language completely copies the grammar of the French language.

“This is a language that a young child could compose by replacing every word in the French dictionary with an arbitrary combination of letters and each letter with an arbitrary sign,” the experts said. “The language is childish, but as an effort of memory it is a miracle.”

Eliza Müller’s subconscious was trying to get out not only in a trance state. Sometimes she switched to the “Martian language”, not noticing that the interlocutor did not understand her. There could be several such interruptions during one conversation. Even in business correspondence, Frau Müller often inserted phrases or individual letters in “Martian” without noticing the mistake.

In 1900, Flournoy’s book “From India to the Planet Mars” was published, where the author summed up the five-year work of a team of scientists. After reading it, Eliza was furious. Since then, no specialist has received permission to attend her sessions.

A year later, a wealthy American woman gave Eliza financial support so that she could quit her job and focus on developing her mediumship. Frau Müller, who is so good at drawing, has a new talent. Going into a trance, she took up brushes and painted pictures on religious themes. Eliza’s paintings are considered a prime example of art brut – art of non-professionals, which has a spontaneous character and does not depend on cultural traditions.

Frau Müller died on June 10, 1929 in Geneva. Until her last breath, Eliza believed that she was the chosen one of spirits, aliens and saints, called to bring the truth to our lost world.

In this article:Eliza Müller, Martian Language