A mysterious object fell into the waters of Indonesia but the country’s authorities have not been able to locate it so far or formulate a theory about what is possible.

The object appears to fall at a very slow speed until it disappears into the water.

The author of the video was Asan Farades, a student at a local school, from which he returned in the evening after classes on a motorboat. When something began to fall from the sky, Asan reacted and began to film the incident.

“The object looked like a balloon running out of gas and deflating when it fell. It fell slowly. There was also no light like an unidentified flying object or meteorite,” Asan said in an interview with the newspaper.

The video also shows the voices of a woman and a child speaking Madurian. They also see the object and say that they do not understand that it is falling.

Local fishermen also saw the “balloon”, who immediately jumped into boats and rushed into the sea for trophies. Balloons, even when punctured, become heavier than air, nevertheless, they still remain lighter than water and tend to float. In addition, the “balloon” was quite large, there was no storm, it took place in the bay with the minimum wave height – finding the “balloon” was a matter of several minutes. However, the fishermen never found anything.

The brave Indonesians did not give up and intended to continue their search. But then the military drove up on the ships of the Coast Guard and invited the balloon hunters to get out as quickly and as far as possible.

The object fell in the Jangkar sea area of ​​Indonesia and the authorities started a two-hour search for its possible location but to no avail.

Those fishermen who took part in the search for it in an interview with detik.com say that it was anything but a balloon. Launching balloons for holidays in Indonesia is such a popular pastime. From time to time they fall and are immediately picked up from the sea.

On the other hand, fishermen are also not very sure about UFOs, since they see UFOs from time to time and know what they approximately look like. Usually they fly fast and they glow, and if they dive into the sea, they don’t enter it vertically and slowly.

The newspaper also tried to question the police, but the police just shrugged their shoulders as the military also chased it away. Therefore, everyone has so far agreed on a version of the probe, similar to the one that fell in 1947 in Roswell.

Thus, in general terms, the situation was well described by eyewitnesses. That is, the object is similar to a classic cylindrical UFO, only they never fly in this way, sliding parallel to the surface along their long axis. Therefore, here, it seems, either the UFO was shot down, or something happened on board, after which it fell into the water in a tailspin.

In this article:cylindrical UFO, Indonesia

Small Indonesia Monsters – Fiction or Reality? Jenglot is a creature discovered in Indonesia. It looks like a small humanoid doll and appears to... 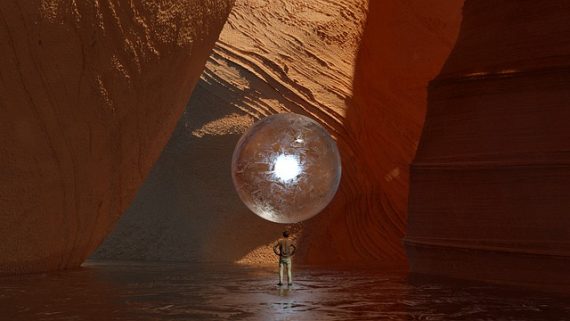 Mysterious Orbs Seen Rising Out of Large Hole in Spain

“What is clear is that it is a cylindrical object of two meters in length. No doubt it is not part of a terrestrial...