England’s famous London Underground railway system serves Greater London and parts of the counties of Essex, Hertfordshire, and Buckinghamshire. It’s also the world’s oldest underground network of its type: services began on January 10, 1863, on the Metropolitan Railway. Today, the London Underground has no fewer than 268 stations and approximately 250 miles of track, making it the longest sub-surface railway in the world. In 2007, over one billion passengers were recorded as having used the Underground since its creation.

According to some, however, the London Underground is home to much more than just tracks, trains and commuters. Deep within the maze of dark old tunnels, distinctly strange and diabolical things are said to lurk… Tales of ghosts and monsters roaming the sinister depths of the London Underground have circulated for years. Some of these legends were incorporated into a 1972 film titled Death Line, starring horror-movie stalwarts Christopher Lee and Donald Pleasance. The movie tells the story of a cave-in at a station being built at Rus­sell Square in the 1890s. When the accident occurs, several Irish laborers (both men and women) are presumed killed. The construction company subsequently goes bankrupt and cannot afford to dig out the bodies. As might be expected, the laborers don’t actually die, but instead they survive and reproduce. Eighty years later, their devolved offspring live deep within the underground tunnels, replenishing their food supply from the platform at Russell Square.

Michael Goss has studied legends of such devolved humans roaming the tunnels of London, and is skeptical that they have any basis in fact: “These troglodytes exist in that nebulous quasi-material form that is part-rumor, part-legend…the subterraneans seem a deceptively playful kind of London legend, the sort which narrators repeat with disparaging amusement, but which cries out to be believed… They probably eat the sandwiches and burgers we discard and it is ‘widely believed’ that they also eat tramps, drunks and other isolated late-night commuters. Now you have another good reason for avoiding the Northern Line after rush hour.”

But not everyone is quite so certain that the reports are the stuff of myth. Jon Downes is the director of the British-based Center for Fortean Zoology, dedicated to the investigation of mysterious animals such as Bigfoot, the Abominable Snowman, and the Loch Ness Monster. Between 1982 and 1985, Downes worked as a nurse at the Royal Counties Hospital, near the English city of Exeter. While employed there, Downes heard stories of how at some point in the 1940s, disturbing things occurred that had a direct link with the tales of strange goings-on beneath the London Underground.

According to a doctor Downes spoke with, the events began with a series of late-night phone calls to the hospital from the Lord Lieutenant of the County, from the then-Earl of Devon, and from elements of the Devonshire Police Force, all secretly informing senior personnel at the hospital that a highly dangerous patient was to be brought to the hospital within the hour, and would require specialist care in an isolated, locked room.

Around 45 minutes later, a police vehicle arrived at the hospital, reversing with a screech up to a side door. Several police officers tumbled out of the back door of the vehicle while trying to hang onto what the doctor said resembled a dirt-encrusted and hair-covered caveman.

The creature was reportedly around six feet in height and completely naked. It had a heavy brow, wide nose, and very muscular arms and legs. For three days, the man-beast was securely held at the hospital, Downes was advised, before it was transferred to an unspecified location far below the London Underground. Its fate remains unknown.

In some respects, this story eerily parallels that of a man named Colin Campbell, who maintains that while traveling home on the Underground in the mid-1960s, he had a nightmarish encounter with a very similar beast.

It was late at night and Campbell was the only person to get off the train at its scheduled stop on the Northern Line. As the train pulled away from the deserted platform and Campbell made his way towards the exit, he claims to have heard a “funny growl coming from behind me.”

Campbell quickly spun around and was shocked to see a large, hairy, ape-like animal lumbering across the platform towards the track. Most bizarre of all, the beast was seemingly spectral in nature, rather than flesh and blood.

Campbell says “it was like it was embedded in the concrete… About three-quarters of its body was above the platform, but its legs were in it, and [it was] walking right through it, like a ghost.”

As Campbell stood in awe, too shocked to move, the beast continued to walk through the concrete, right onto the tracks, and then straight through the wall directly behind the tunnel.

Could this have been the ghostly form of the hairy wild-man taken from Starcross Hospital all those years ago? We may never know. But sightings of weird creatures on the London Underground are not limited to man-beasts.

For the last 40 years or so, tales have abounded of so-called “big cats” on the loose in the British countryside. Such reports are now at almost epidemic levels. Precisely what they are, where they come from, and why no one is ever able to capture a specimen are matters of heated debate, with no end in sight. Long before the present-day controversy reared its head, however, the London Underground may very well have been home to one of these elusive beasts.

Maureen Abbott saw what she describes as a “big black panther” (in reality, “black panthers” are melanistic big cats, such as cougars and leopards) that was “bounding along the track” as she stood awaiting a train on the Bakerloo Line late one winter evening in 1954 or ’55. The animal was “running very fast,” and as it passed her, it quickly looked in her direction with a “horrible frown on his face” before vanishing into the darkness of the tunnels. Although Abbott did not see the creature again, she has never forgotten her terrifying encounter with the unknown, deep below the city of London.

Strange creatures aside, encounters of a distinctly spectral nature have been reported on the London Underground for decades on countless occasions and in numerous tunnels.

British Museum Station closed on September 25, 1933. For many years prior to its closure, however, a local myth circulated to the effect that the ghost of an ancient Egyptian haunted the station. Dressed in a loincloth and headdress, the figure emerged late at night into the labyrinth of old tunnels. The rumor grew so strong that a London newspaper offered a reward to anyone who would spend the night there. Surprisingly, not a single soul took the newspaper up on its generous offer.

The story took a far stranger turn after the station was shut down, however. The 1935 comedy-thriller movie Bulldog Jack included in its story a secret tunnel that ran from the station to the Egyptian Room at the British Museum. The station in the film is known as Bloomsbury, and was a stage set; however, the scenario presented in the film was based on the story of the ghost of British Museum Station.

On the same night the movie was released, two women disappeared from the platform at Holborn, which happened to be the next station along from the British Museum. Strange marks were later found on the walls of the closed station, and more sightings of the ghost were reported, along with weird moaning noises coming from behind the walls of the tunnels.

London Underground officials played down the story, and there has always been a blanket denial on the existence of a tunnel from the station to the museum’s Egyptian Room. Nevertheless, the story was resurrected in Keith Lowe’s novel Tunnel Vision, in which the lead character, trying to impress and scare his girlfriend, states: “If you listen carefully when you’re standing at the platform at Holborn, sometimes—just sometimes—you can hear the wailing of Egyptian voices floating down the tunnel towards you.”

British Museum Station is also said to be home to a ghostly figure that roams the tunnels in a large coat, tall hat, and gloves. Supposedly, the ghost is that of William Terriss, an actor who was stabbed to death near the Adelphi Theater in 1897.

And then there is the ghost of Bank Station. During the construction of this station, workmen are said to have awakened the spirit of a woman named Sarah, better known as the “Black Nun.” Her brother Philip was said to be a bank employee executed for forgery who worked close to the station. According to legend, Sarah’s spectral form still roams the platforms and tunnels, looking for her long-lost brother.

With stories of hairy man-beasts, mysterious big cats, and a dizzying assortment of ghosts, specters, and spooks prowling the London Underground, we might legitimately ask: what else lurks in the shadowy underworld of England’s capital? Perhaps in time those mysterious tunnels will finally give up all their terrible secrets. Until then, however, if you ever find yourself alone on the Underground, late at night, beware: they may be watching you…

In this article:London, strange tales, Underground 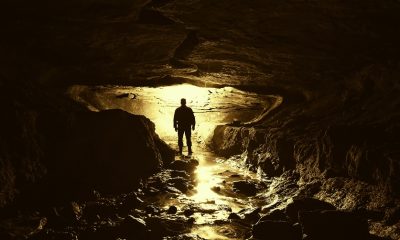 The Pentagon has set out to conquer the “underground world”

Mankind has conquered nearly all places on the surface of the planet throughout the ages. From dangerous seas to the highest mountains, our civilization...